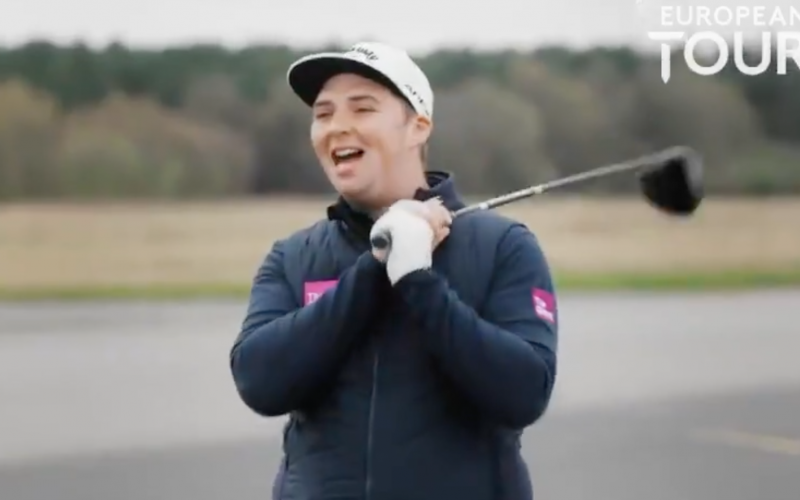 By Coleman Bentley
You know what they say about records. They’re meant to be broken, even those no one else is stupid enough to try. Enter the Guinness Book of World Records mark for the longest golf shot ever hit into a moving car. Back in 2012, the record was set at 273 yards and has stood for nine years since, mostly because, well, who wants to go out there and spend an entire day lobbing balls at a minivan when you could be lobbing them at a flagstick instead?

The answer, as it turns out, is oft-shirtless, sometimes pantless European Tour pro Marcus Armitage, who set his sights on that very record on Wednesday. After countless close calls and excruciating near misses—some of which cracked the windshield of the BMW M8 convertible speeding to catch Armitage’s drives—”The Bullet” eventually triumphed. Check it out.

That’s the long version. If you’re a fan of non-stop English colloquialisms or want to watch Armitage tear his shirt off and go running down the tarmac only to find out his initial attempt was inches short, this is the version for you. If you’re in a rush and want to get great straight to the money shot, however, then perhaps you’d prefer this:

Honestly incredible. Armitage flew his drive 303 yards into the back of a car speeding away from him at 115 mph. The driver, Paul, even slams on the brakes, locking up the tires at speed in order to catch the incoming shot. Whether or not that risk was worth the reward remains to be seen, but we can tell you this: That ace you hit back in 2004 on your puny muni’s 115-yard par 3 just doesn’t compare.

Max Homa produced one of the more memorable wins of the PGA Tour season in February...