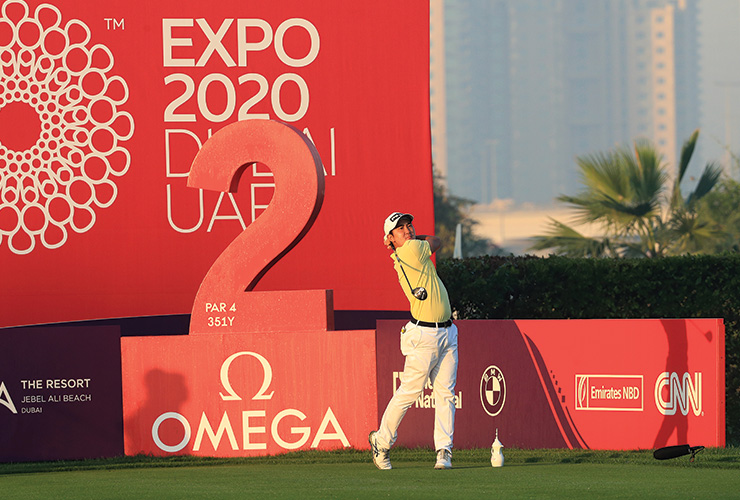 By Joy Chakravarty
Takumi Kanaya has showed once again why he is widely considered as the heir apparent to Hideki Matsuyama as the next superstar of Japanese golf.

After an agonising wait of more than 10 minutes on the 1st tee as early-morning mist hugged the fairways, the former amateur world No1 started his maiden European Tour round with birdies on his first two holes.

He then overcame a stutter, four bogeys in five holes from the 5th, with a brilliant return to the clubhouse played in four-under par 33 to sign for a two-under 70.

Kanaya is one of the tournament invitees this year, continuing the OMEGA Dubai Desert Classic’s tradition of featuring some of the finest young names in the game each year.

The 22-year-old from Hiroshima possesses a stupendous CV. He first served notice by finishing second in the 2017 Japan Open, a tournament that is regarded by many as tougher than the U.S. Open given how the golf course is set up for the week.

Kanaya turned professional in October last year after playing in the U.S. Open and also featured in the Masters and the Open Championship in 2019 by virtue of winning the 2018 Asia-Pacific Amateur Championship. He also won a title on the Japan Golf Tour (the 2020 Mitsui Sumitomo Visa Taiheiyo Masters) as an amateur and was awarded the 2020 Mark McCormack Medal for occupying the No1 spot on the World Amateur Golf Rankings for 55 weeks.

Within five weeks of joining the paid ranks, Kanaya won the flagship event of the Japan Golf Tour – the Dunlop Phoenix Open – and has made rapid strides to rise to 124th in the Official World Golf Ranking (OWGR).

“I am happy with the start. It looked like things were getting out of my hands in the middle but I am proud of the way I pulled it back,” said Kanaya, who is graduating from Tohoku Fukushi University in March this year. His idol and go-to person for golf and life advise, Matsuyama, is also an alumni there.

“I am very thankful to the Omega Dubai Desert Classic for giving me an invite. I am also playing in Saudi Arabia next week, and then there will be a big gap as I will wait for the JGTO Tour to start in April. So, it is very important for me to do well this week.

RELATED: Sergio Garcia’s opening round was a Majlis masterclass

“My immediate goal is to break into the top-100 of the world rankings so that I get to play in the PGA Championship later this year. That’s the only major that I have not played so far in my career, so that would be nice. Of course, if I get into the top-50 somehow before April and make it to Augusta National, that won’t be too bad either.”

His first trip to Dubai has been a bit of a disappointment, but that has nothing to do with his performance on the golf course.

“I had heard so much about Dubai and I wanted to go and see a few places. However, we are in a bubble and we cannot even step out of the hotel. It’s a bit of shame and hopefully, I can come back when things are normal,” said Kanaya.

Iron play and putting are the strongest part of Kanaya’s game but even they could not help him recover from errant drives in the middle of the round.

“I drove very poorly in that stretch. I was in the left rough on the 5th, then right rough in the 6th, then in the right desert on the 8th and right rough on the 9th…all with my drives. The lie on 5th was so bad that I needed to chip out safely,” explained Kanaya, who trains with Australian Gareth Jones, Japan’s National Team coach.

“Thankfully, I managed to sort out my issues with the driver on the back nine. Hopefully, I can do even better tomorrow and get into contention by Sunday afternoon.”