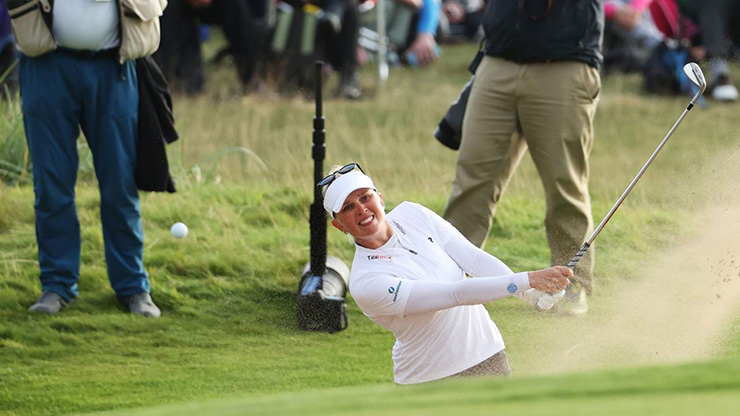 Nanna Koerstz Madsen didn’t pull off the bunker shot she hoped for on the final hole of the AIG Women’s Open. Warren Little/R&A

By Matthew Rudy
It’s OK to admit it: As hard as it was to watch Nanna Koerstz Madsen shank a bunker shot while tied for the lead on the last hole of the AIG Women’s Open, part of you could identify with what happened. We’ve all been there.

One of the biggest challenges for any player—from the LPGA down to weekend amateurs—is to perform a precise movement when the pressure is on. Nervousness tends to cloud decision-making and tighten muscles, two things that produce a chain reaction of (often negative) unanticipated consequences—especially on a high-difficulty shot like Madsen’s long downhill bunker shot.

“Two things happened here,” says top New Jersey coach Terry Rowles. “She was too far away to use a shot where you swing hard to the left and hold the face open, and she hit too close to the ball.”

That’s fine to say, but what should she have done instead—and what should YOU do the next time you need to get out of the sand in a high-stress moment?

“Even on run-of-the-mill bunker shots, players tend to back up, meaning they shift back or hang back to try to help the ball out,” says Rowles, who is based at Mountain Ridge Country Club in Caldwell, N.J. “Stabilize your weight at the start and keep it where it is, which produces the consistent entry point.”

Another element of stability? Committing to the style of shot you want to play early and sticking with it. “The more nervous you are, the farther behind the ball you want to hit with a harder swing and more release,” Rowles says. “Under pressure, it’s easier to do something faster than slower, and release is a ‘can-do’ thing that doesn’t deteriorate with speed. Relax your arms as much as possible and release. A lot.” 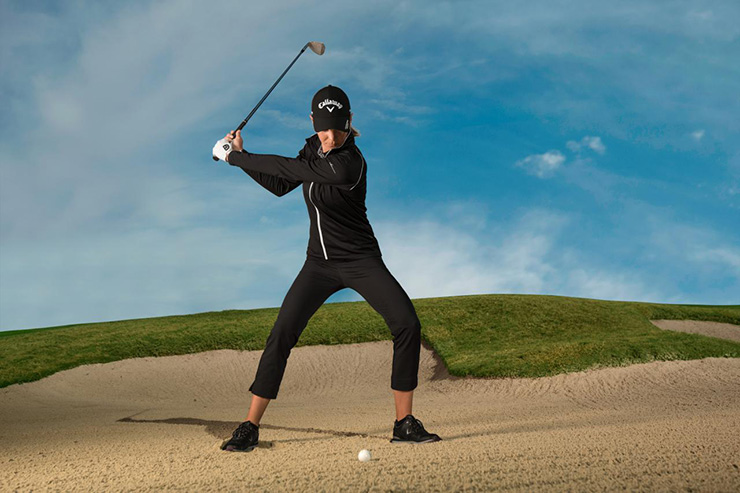 Get more open than you think. Dom Furore / Golf Digest

The fail-safe that works with stability? An open clubface. That might seem counter-intuitive—after all, a shank comes when you clack it off the hosel, which is aimed at the ball as you open the face more. “Opening the face ‘too much’ at address and doing it more as you take the club back encourages you to release more and harder, which is what you want,” Rowles says. “For the rest of the swing, you’re after a hook feel. You’ve built in loft so that you’re safe to accelerate with the adrenaline you’re feeling.”