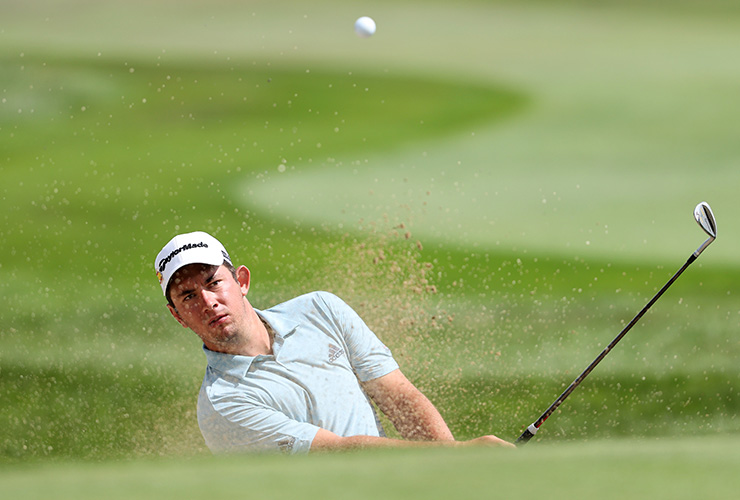 Lucas Herbert will enter the final day of the Dubai Duty Free Irish Open with a one-stroke lead as he bids to become just the third Australian winner in the event’s 94-year history, and the first wire-to-wire winner since 2014.

The 25-year-old has long been tipped for big things in the game and his maiden European Tour victory at the 2020 Omega Dubai Desert Classic confirmed his prodigious talent. Herbert now stands on the brink of winning one of the Europe’s most historic national opens, and he would join Ossie Pickworth (1950) and Brett Rumford (2004) as Australian winners of the prestigious title.

He looked to be steaming clear of the chasing pack midway through round three at Mount Juliet Estate, opening up a three-stroke advantage after a stunning opening 10 holes which yielded four birdies without a single dropped shot.

The Victoria player struggled, however, to adjust to the swirling winds in the late afternoon and a pair of bogeys on the 11th and 14th holes pulled him back toward the rest of the field on a 15 under total, as he signed for a two-under third round 70. Mikko Ilonen of Finland was the last wire-to-wire winner of this event back in 2014.

“I played okay. In one aspect, it’s kind of frustrating. I could have really put a good one away and felt like I got too far away from the majority of the field, but 15 probably has just left the door open a touch.

“So still going to have to really be on it tomorrow. Also it was pretty tough out there. The back nine, the wind was swirling and blowing a lot. Didn’t hit a lot of bad shots, couldn’t quite get some putts to fall. Felt like I maybe played all right but just didn’t get the reward for it. But I can’t be too upset.

Herbert has a simple game plan for Sunday but knows it won’t be easy given what is on the line.

“I’m trying to stick to my own goals. If I can get to 20-under, I feel like it’s going to be pretty hard to catch, and if I am caught, someone has played really good golf and they probably deserve to win it. If I can stick to my own goals, hopefully holding a trophy or anything like that takes care of itself.

“The Irish Open is pretty cool and if you can win an event with Tommy Fleetwood and Rory McIlroy in the field, I don’t think anyone’s going to try to knock that out of your possession any time soon.

“So tomorrow is a massive chance, and obviously I think in time to come I’ll probably look back on it and realise it more, but at the moment, I’m trying to stay pretty focused on the moment and really feel like I just play my game and let that sort of take care of itself.”

Johannes Veerman of the USA will be harbouring hopes of a dream maiden title as he sits one shot back following a five-under 67, while South African Justin Harding is two shots further back on 12 under after a stunning 65 early in the day – the 35-year-old already has one win under his belt this season at the Magical Kenya Open presented by Johnnie Walker.

Former Ryder Cup players Tommy Fleetwood and Thomas Pieters lie six shots off the pace in a share of 12th position, while Cormac Sharvin is the leading home player – the Northern Irishman carded a 69 for a seven-under total, two ahead of Graeme McDowell on five under while Rory McIlroy carded a one-over par 73 for a four-under total.