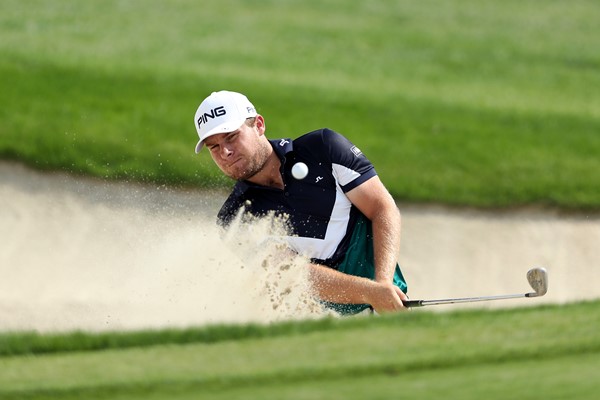 By Kent Gray
Ask Tyrrell Hatton for his favourite closing hole in golf and the 18th on Earth at Jumeirah Golf Estates most definitely won’t feature.

Last year his tee ball on the 72nd hole went for a swim and cost the Englishman the DP World Tour Championship by a stroke to countryman Matthew Fitzpatrick. Fast-forward to Friday at the 9th edition of the European Tour decider and a run in with a small beach a green side fronting the green cost the 26-year-old a slice of history.

Hatton stood on the tee -10 for his second round and needing a birdie to eclipse Justin Rose’s 2012 course record of 62. Sadly his long iron approach plugged high up in the side of the trap to the point where he could only advance his third shot a few feet further into the sand. A rushed fourth left well short and two putts later and Hatton signed for a 63.

He has a fried egg waiting for him on the 18th hole ? pic.twitter.com/0ZW5lgZ7tM

The consolation was the early clubhouse lead on day two at -9, a title contending advance of 39 places up the leaderboard following an opening 72. But the bogey was obviously irksome.

“Obviously if you said at the start of the day I would shoot 9-under, I would be over the moon,” Hatton said. “But that was a pretty bitter pill to swallow on 18. That hole seems to hate me. Hopefully one day I’ll actually play it well.”

“I was in-between clubs for the second shot and tried to take the shorter club and hit it harder and didn’t make a great swing. Then obviously you don’t expect to be plugged in the face in a bunker like that. So that was disappointing. But you know, overall, played great. Gave myself lots of chances. Putted lovely and it’s just nice to see some putts drop again.”

Hatton didn’t see the ball drop in what was the highlight of his round, an eagle on the 407-yard, par 4 5th.

“Yeah, a grip-down 9-iron into 5. I think we had about 144 yards just slightly into the wind and it pitched about two inches past the hole and I think just hopped back in. I didn’t see it drop; the second shot’s uphill. But nice to get a bit of momentum early on.”

Hatton won back-to-back at the Alfred Dunhill Links Championship and Italian Open in October, the former a successful title defence. On projected standings he’s overtaken Sergio Garcia for third place in the Race to Dubai standings and just hopes his putter continues to run hot after a different model failed to co-operate on Thursday.

“I was using a different putter, although it’s the same sort of shape I’ve been using. I think it was a slightly different weight and I wasn’t comfortable with it, and along with my own body not feeling too great with my back cramping up. It was sort of a long day yesterday.

“There was a little substitution with the putter from yesterday, so that seemed to work well. Putted lovely [today] and it’s just nice to see some putts drop again.

The course record is 10 under par.

Hatton is now 10 under with a par five to play! #DPWTC pic.twitter.com/osOliMIVR0

“Yesterday I was struggling with cramps in my back and a horrific blister on my foot. It’s just the blister now, so a spoonful of cement at dinner and I’ll be all right tomorrow.”