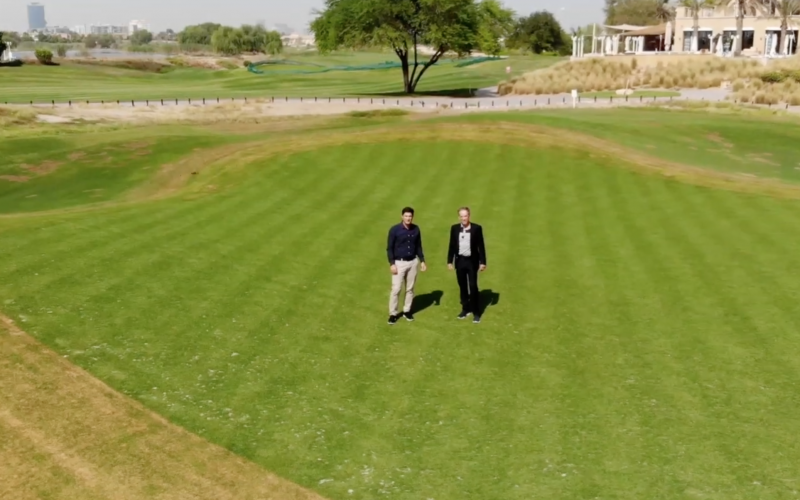 By Kent Gray
Arabian Ranches Golf Club is set to re-open on November 1 after a five-month renovation of the Dubai club’s greens that will return the championship layout to its glory days of the early 2000s, the club’s management company promise.

Troon International President Mark Chapleski is confident the makeover of the Ian Baker-Finch design, which began on June 1, will please and even surprise members and green fee players.

“…Anybody that has played it in the last 10 years will hardly recognise it. The green complexes are back to their original shape…it’s going to be awesome,“ Chapleski said.

“The greens look very healthy, they’re coming along well, we’ve done some other work on other parts of the golf course. It’s going to be a completely new experience. “

The practice putting green at the Emaar-owned property (which opened in 2004) has also been rebuilt while the driving range, turf nursery and the desert surrounds on most holes have been enhanced as part of the ambitious course improvement programme.

Like Chapleski, Arabian Ranches G.C. General Manager Elliott Gray is clearly happy with the progress as this series of social media posts highlight.

The Greens renovation at ARGC is progressing well, pictured below is the 9th green, some new lines on putts will be had! A big thank you to Sean Kinsley his dedication and commitment to this project has been second to none ! ?️‍♀️⛳️??‍♂️@skinsleygolf @troonint @RanchesGolfClub pic.twitter.com/EtlpqL2xR7

Progress is good, first 9 holes and putting green will be completed soon. We are excited to see the larger surfaces and what looks like to be a few new undulations ?️‍♀️⛳️??‍♂️@RanchesGolfClub @skinsleygolf @troonint @TroonGolf pic.twitter.com/rSMvQ0Ty9P

The first cut of front nine greens after the planting of sprigs in mid July. We are on schedule, thanks to Sean and his team for their passion and commitment . ?️‍♀️??‍♂️⛳️?☀️? @RanchesGolfClub @skinsleygolf @troonint @troonint pic.twitter.com/37K9nonmBu

There is a wee stripe appearing ladies and gentlemen! The second cut on our new greens completed today, and yes we are still very happy with the progress ?️‍♀️⛳️??‍♂️@RanchesGolfClub @skinsleygolf @IBFinchy @troonint @TroonGolf pic.twitter.com/5ULCfxsVqT

Starting to see the greens stripe up now, great cover of grass over the entire surface! Sean and the team working extremely hard to ensure everything is in place for re-opening. Today F9 greens verti cut and cleared, walk behind mowers to finish them off ?️‍♀️⛳️??‍♂️@RanchesGolfClub pic.twitter.com/y0E0bkCnES

Desert Golf, a division of Desert Group, completed the greens renovation two weeks ahead of schedule. The course was closed to pave way for a greens renovation due to the invasion of foreign grasses, which had affected the uniformity, appearance and smoothness of the greens.

“The Arabian Ranches greens renovation process entailed a comprehensive survey of all 18 greens, followed by excavation and the precise shaping of the subgrade of all the greens in order to mirror the final levels,” Desert Golf said in a statement.

“A consistent depth of USGA greens mix was then added and shaped to meet original design contours. Finally, the greens were planted with certified Platinum TE Paspalum sprigs, an environmentally sustainable, salt-tolerant turfgrass, which was refrigerated and shipped by air from the United States of America.”