The Great Divide: The clash between modern tour pros and golf course architects 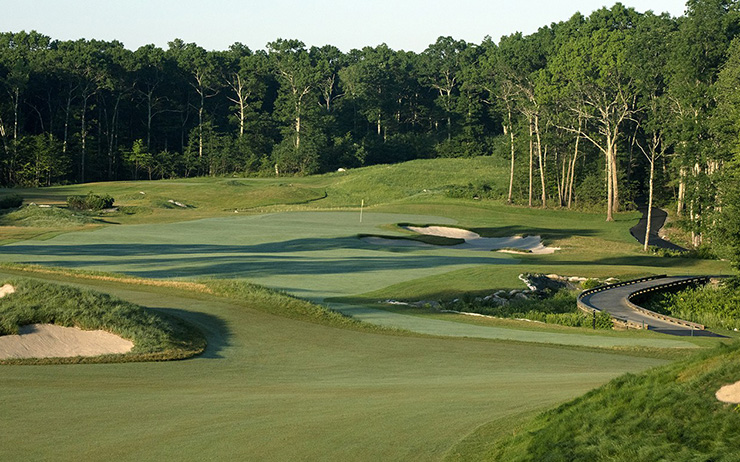 By Jaime Diaz
The rugged 12th hole at TPC Boston—imaginatively re-designed by Gil Hanse to the consternation of many competitors at the Dell Technologies Championship—consolidated a hard truth. Being a course architect, especially one who designs holes to be played by the best golfers in the world, is getting increasingly more difficult.

That’s because, even as most of the courses on the professional tours have been stretched to a near-breaking point, the game for the world’s best golfers keeps getting easier to perform (which is not in any way to say it is getting easier to win).

Through advances in clubs and balls, fitness, technique and agronomy, tour players keep hitting the ball farther and proportionately straighter, with less fear of a disastrous miss. They are leaving themselves shorter irons into greens (very often some kind of wedge), clubs designed to produce the combination of accuracy, height and spin that allows stopping power around the hole. It adds up to a lot of birdie chances inside 15 feet, the distance from which the vast majority of putts are converted.

Amid all this progress, the modern architect’s task is to find a way to fairly increase the challenge to the best players. In the process, he aims to reward skill through the bag, encourage more strategic options, introduce more variety in shot-making and club selection (as in longer clubs for approaches to par 4s) and make the game more interesting to play and to watch. Otherwise, golf at the highest level would likely devolve into a pattern of driver (or 3-wood) off the tee and wedge to 12 feet.

For the last several years, architects have tried to find ways to counteract the “bomb and gouge” style. Measuring the appropriate consequences and making the changes that enact them is what keeps designers up at night.

For the last several years, architects have tried to find ways to counteract the “bomb and gouge” style that has become the percentage way to play at regular tournaments on the PGA Tour, where rough is manageable and greens are not overly firm. Players now know that, in general, their chances are better from off the fairway with a short iron or wedge than from the short grass with a 5- or 6-iron. It means that all things being equal, a player would rather be a long hitter who’s a bit crooked than a short one who is generally straight.

I disagree with the idea that a long driver’s advantage should be neutralized by narrowing landing areas beyond 300 yards, bringing together more closely the area from which players hit their approaches. But there’s a good argument that to restore a balance of equitable skill, long hitters who don’t hit it straight should pay a stiffer price than they currently do.

Measuring the appropriate consequences and making the changes that enact them is what keeps architects up at night. In a souped-up game in which setups necessarily keep inching closer to the edge, it’s easier to go too far. Or at least be perceived to have done so, especially when the chief evaluators are players who would prefer not to change their playing style.

At TPC Boston, Hanse was trying to inject some variety into what has become known as a “bomber’s paradise.” Reasoning that a good course has ebb and flow, he decided that making the 12th a hard hole made sense early in the back nine, before a closing stretch that has traditionally produced a lot of birdies.

Hanse stretched the formerly 461-yard par 4 all the way to 511 yards and built a new, more contoured green. To keep tee shots from running down a hill toward the green, he ended the fairway at 330 yards, and at 305 yards, placed two deep “lobster pot” bunkers evoking the Principal’s Nose on the 16th at the Old Course at St. Andrews. Justin Thomas’ called the pair “so death.”

On a hole that in the past had left wedges and 9-iron approaches, Hanse wanted players who chose not to try to thread a longer tee shot past the fairway bunkers to hit a mid- to long iron approach into the green, something that has become rare for the tour’s longer hitters. In Friday’s first round, Dustin Johnson hit a 6-iron into the 12th, the longest iron he said he had hit into a par 4 all year.

Predictably, players didn’t like being asked to “lay up” on a 500-yard-plus par 4. Some refused, but rather than take on the bunkers, they hit drivers way left—over trees, and often into rough into the adjoining 13th fairway. Eventual winner Justin Thomas did this all four days, hitting 7-irons into the green, as did another younger bomber, Jon Rahm. They decided that missing the green would still leave them a better chance to save par than driving into the bunker and being left with a long third.

Hanse, the designer of the Olympic Course and highly regarded for his thoughtful work, absorbed the expected criticism and urged patience. Changes to a hole often cause initial discomfort (and arguably should), and a good golf hole by definition shouldn’t fully reveal its secrets immediately. “Once they figure it out, they’ll see there was sound thought put behind the design,” Hanse said of the 12th, which played to an average of 4.343 strokes, about a third of a stroke higher than it used to. 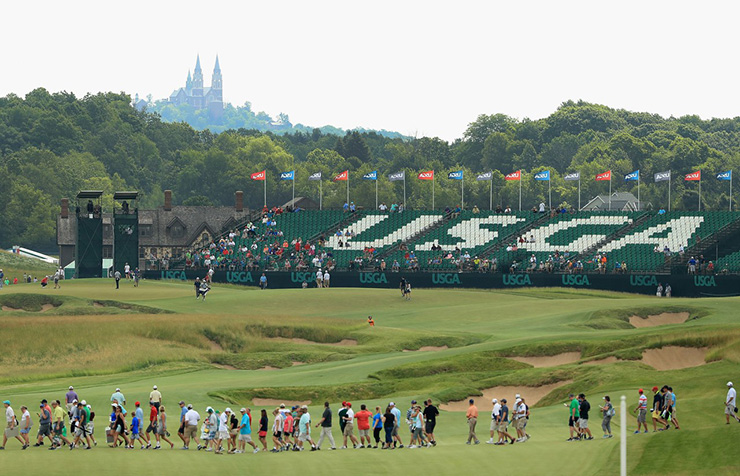 The controversy in Boston comes after two major championships in which the setups were questioned. At the U.S. Open, where as the “ultimate examination” the setup is expected to get closer to the edge than any other event, Erin Hills played easier than anticipated.

Because heavy winds that regularly whip along the Wisconsin plains never came, and rain did, fairways made wide to allow for the expected conditions gave the players too much room. The extra high rough that the USGA installed to punish the wildest wind-blown drives barely came into play, and even with the damp fairways, the record length of the course barely deterred the longer hitters, who regularly launched 340-yard blasts with relative impunity.

Perhaps in an unconscious response, the setup for the PGA Championship at Quail Hollow went the other way. On a vastly redesigned course, narrow fairways were bordered with new Bermuda rough that was extra thick and wet from rain, while new greens were overly firm and fast—and undulating—as SubAir systems dried them out. The result was a test that offered almost no tolerance for poor ball-striking, in a sense playing the role of U.S. Open for 2017. It was refreshing to see the best players truly tested, and the best strikers of the week were rewarded. At the same time, average tee-to-green play was too severely penalized, and the golf was often painful to watch.

Next year the U.S. Open is going to a Golden Age classic, Shinnecock Hills, artful in the extreme, but also shortish. It’s the kind of venue that is most at risk of being overrun by the modern game.

In the last few years, Bill Coore and Ben Crenshaw restored the course. The fairways were widened (up to 60 yards), the greens expanded, and trees were removed. Visually, the result was spectacular, and the club’s members have loved the changes.

The USGA, too, initially sang the restoration’s praises, but recently officials have reconsidered their original setup plans at Shinnecock. The fairway width—done to create more strategic angles and options—was deemed too wide (perhaps in the wake of Erin Hills). Native fescue rough is now being planted on the edges of the fairway to narrow them back down. The course won’t be as narrow as it was when it held the championship in 1986, 1995 and 2004, but it will be narrower than what was originally planned on for 2018.

Why? Increasing fairway width is a well-meaning concept intended to introduce more angles and shot-making options, as well as putting the driver back in the players’ hands. But it’s become apparent that on a fast-running vintage course that gives players plenty of room off the tee, drivers will get bombed into wedge distance, from where angles essentially become moot.

So that the art of Shinnecock can be brought out rather than overrun, the decision was made that long and crooked has to be punished.

What’s clear from Erin Hills, Quail Hollow, TPC of Boston and Shinnecock Hills is that the modern game is getting harder to fit into golf’s tournament arenas. And that a day of reckoning is coming.

Lucas Glover a winner again after ‘a long 10 years’

Lucas Glover was yesterday’s news a long time ago.