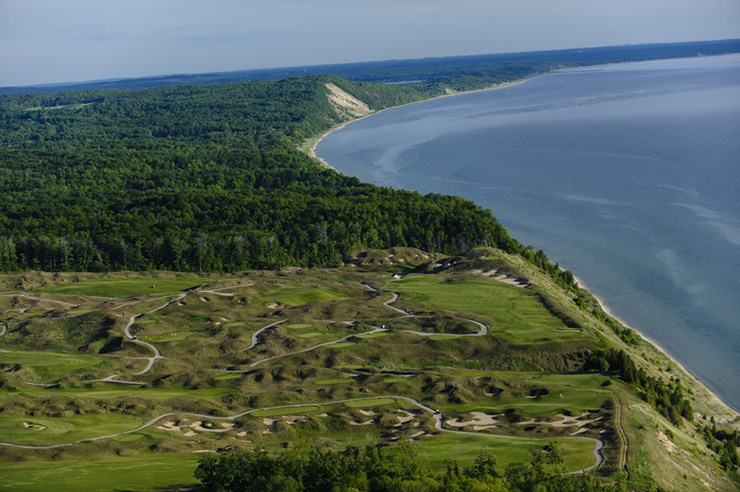 By Joel Beall
Normally, golfers don’t need to be warned to avoid water. Yet that’s the reminder issued at one of the country’s premier courses, following environmental concerns raised by a local paper.

Arcadia Bluffs, ranked 13th on Golf Digest’s America’s 100 Greatest Public Courses, sits above the shore of Lake Michigan, offering some of the most scenic views in the Midwest. Perhaps the best view on the course is at the par-4 12th, which snuggles up to the Great Lake.

And until this weekend, the course allowed players to tee one up into the blue yonder. “Go ahead and do it, everyone does,” read a website description of the hole. “Once you’ve launched a ball into Lake Michigan, on purpose, turn your attention to the native bunker on the right side of the fairway as it is your aiming point on the tee shot.”

This practice is not necessarily unique to Arcadia Bluffs; plenty of courses, be it written or not, have traditions of this sort. However, the Detroit Free Press took issue with it after sending a diver to collect golf balls off the 12th hole. The diver/photographer discovered 200 balls in an hour, which sounds like a great deal, although a sum that constitutes an afternoon at Pebble Beach’s eighth, ninth and 10th holes.

But, citing environmental impact, the Free Press raised its findings to the course, which promptly took down the description from its site.

“In the past, a sign posted at the 12th tee discouraged guests from this practice, however, we discovered this sign actually had the opposite effect as players actually hit more balls into the lake,” read a statement to the Free Press. “The vast majority of our guests do not hit golf balls into Lake Michigan. By not drawing attention to the issue, we believe that the incidents of hitting balls into the lake have decreased. We take our environmental responsibilities seriously.”

To be fair, it’s highly unlikely the golf balls were causing a problem. Or at least to the level that local government agencies are concerned:

“This is not something we would really spend much time on, simply from the level of effort that would go into overseeing this,” Teresa Seidel, the water resources division director for the Michigan Department of Environment, Great Lakes and Energy, told the Free Press. “Not that we are condoning anybody putting anything into waterways. But from a resource perspective, we can’t follow up on something like this. … Because of our limited resources, we have to prioritize issues of greater environmental concern.”

But let this serve as a reminder: The next time you’re at a course, try to keep your tee shot dry.