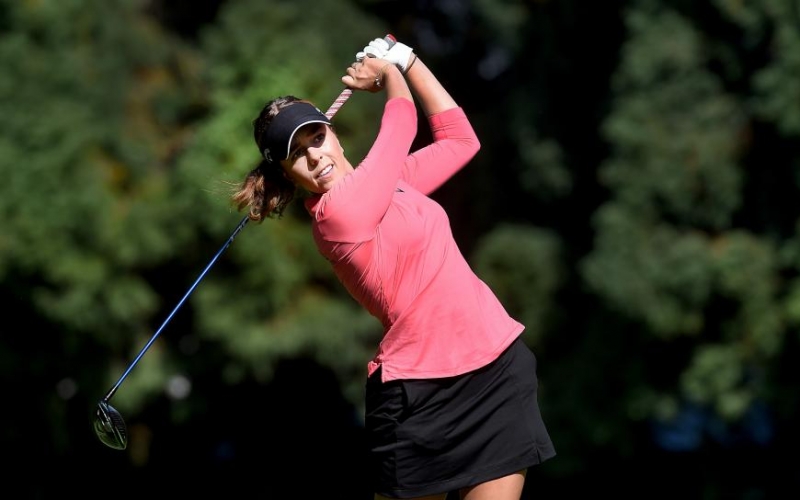 Steve Dykes
Georgia Hall hits her tee shot on the third hole during the final round of the 2020 Cambia Portland Classic.

By Keely Levins
Georgia Hall’s second LPGA Tour win didn’t come easy at the Cambia Portland Classic. The 24-year-old Brit saw Ashley Buhai charge from nowhere on Sunday, playing her last five holes in four under for a closing 65. And when Hall failed to get up and down for par on the 18th, the pair were headed to a playoff, tied at 12-under 204 in the shortened 54-hole event.

After the duo halved the 18th with pars on the first extra hole, they returned once more. This time, Hall made her up and down while Buhai failed to convert her own.

If only that was the most unusual circumstance to have taken place during a surreal week in Portland. When players arrived, they landed in smoke. The fires burning along the west coast of the United States have caused dangerous air conditions in many parts of California and Oregon, Portland not being an exception. The air quality was so bad, practice rounds were cancelled, as was Thursday’s first round. The smoke began to clear, the first round was played on Friday, but then a new set of natural obstacles arrived: play on Saturday was halted because of lightning storms in the area.

Through the ever-changing weather, Hall was able to record her first win in the United States. When she set out her goals for the 2020 season, winning in the U.S. was near the top of the list. Her first LPGA Tour win came in 2018 at the AIG Women’s British Open, but before that, she had other professional wins. She won on the Australian Ladies Professional Golf Tour, the Ladies European Tour Access Series (the LET’s development tour) and the LET.

In 2020, she won twice in July on the Rose Ladies Series, the women’s mini tour in the United Kingdom started and funded by PGA Tour star Justin Rose. Having proven capable of winning elsewhere, Hall, a standout in the 2019 Solheim Cup, knew it was time to win in the U.S.

“I won the British and I just wanted to win again really badly, especially in America,” said Hall, who closed with a four-under 68 in Portland. “I always knew it would maybe be harder, so for me to win it’s a relief that I’ve won in America and I can bring that confidence on to the next event.”