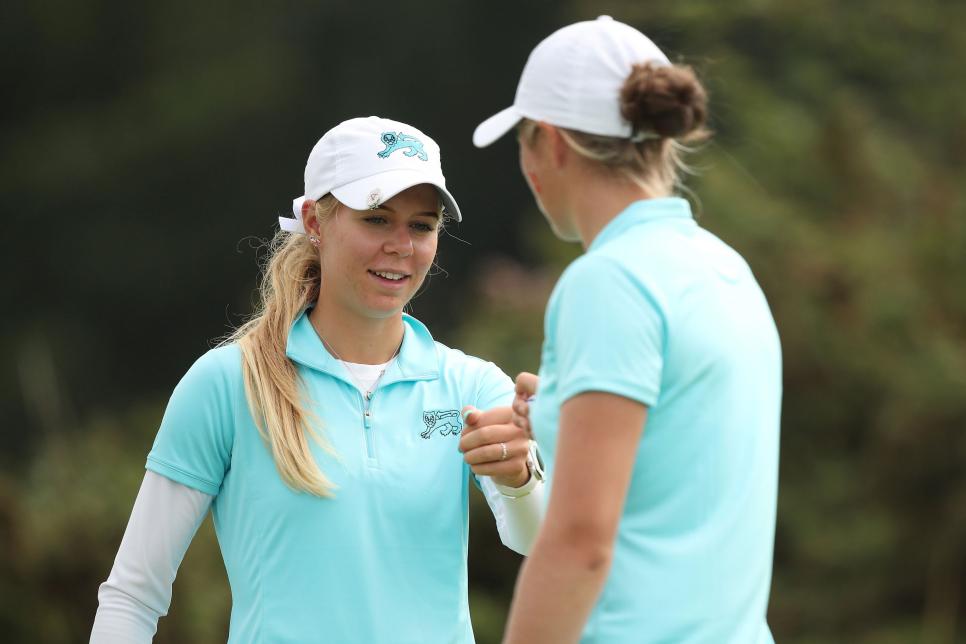 Jan Kruger/R&A
Annabell Fuller and Hannah Darling pulled out a win for GB&I in the afternoon fourball matches, helping the home side take a 4½-1½ lead Day 1 lead at the Curtis Cup.

By Ryan Herrington
The fear heading into the 2021 Curtis Cup was that it would look all too similar to what took place in 2018, when the United States ran away with a 17-3 victory over Great Britain & Ireland at Quaker Ridge. And Day 1’s results do auger another potential blowout. It’s just that the underdogs are the ones with the surprising upper hand.

Victorious in four of six overall matches—after winning only two of 20 three years ago—GB&I holds a 4½-1½ lead on Thursday at Conwy Golf Club in North Wales.

Despite the rally from Americans Rose Zhang and Allisen Corpuz in the final afternoon fourball match for a crucial first win, the U.S. walked away with the fewest points it’s earned on Day 1 since the Curtis Cup moved to a three-day format in 2008.

“Oh, just amazed,” GB&I captain Elaine Ratcliffe said of her reaction to the day’s outcome. “Not amazed, because that sounds dreadful. I’m just thrilled, thrilled with the result. Thrilled that they have played the golf that I know they can play.

“I’m kind of, I’m not shell shocked because I know they can play golf, but to have the points on the board that we have at the moment is brilliant.”

Fueling the notion that the Americans would have their way this week was the collective amateur ranking of the eight women wearing red, white and blue. Five on the roster sit among the top 20 in the World Amateur Golf Ranking, with three inside the top 10 (Zhang at No. 1, Rachel Heck at No. 2 and Corpuz at No. 9). In contrast, only one player on the GB&I team is inside the top 20 (Lauren Walsh at No. 14). The average American ranking is 31st (take out U.S. Women’s Amateur champ Jensen Castle’s 146th ranking and it’s 14.5). The average GB&I ranking is 44.125. 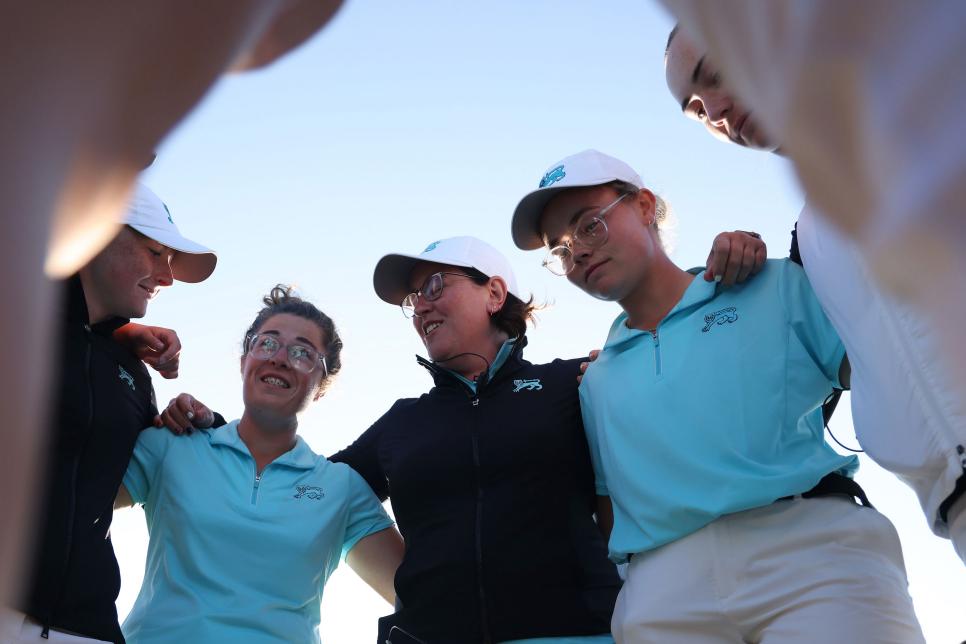 That said, the Americans hadn’t won the Curtis Cup on the road since St. Andrews in 2008, and their attempt to get off to a quick start by pairing Zhang and Heck, World Nos. 1 and 2, together in the opening foursomes match was foiled when they could only pull out a halve against Louise Duncan (fresh off her low amateur performance at the AIG Women’s Open) and Hannah Darling, the British Girls’ Amateur champion.

GB&I then won its two other morning foursomes to head into lunch with a 2½-½ lead that doubled when it claimed the first two matches of the afternoon fourball session. (Annabell Fuller, the lone holdover from the 2018, and Caley McGinty won in both the morning and afternoon.) And when GB&I’s Annabel Wilson and Emily Toy were 2 up with four to play against Zhang and Corpuz, the Americans emotions were low. But birdies by Zhang on the 15th and 16th wrestled the lead back, and then after losing the 17th hole, a par on 18 was enough to pull out a 1-up win.

“It was a huge point,” said U.S. captain Sarah Ingram. “Actually we talked about it last night that [former Curtis Cup captain] Martha Lang’s letter to us discussed how important each half point and point is. So it was really helpful to be able to go into tomorrow with a point and a half.”

A three-point deficit isn’t insurmountable, but it eliminates the margin for error in the coming two days. Only once since 2008 has a team that’s trailed after the Day 1 sessions come back to win the Cup (The U.S. trailed 3½-2½ in 2010 but came back to sweep all six matches on Day 2 and cruise to a 12½-7½ victory.

“I just want them to really know that they all played very well today,” Ingram said. “Actually, I’m not really sure how the second match [in the afternoon] went, I’m pretty sure they were around par or under par, but I know that the first match was five under par and the third match was three under par. So they played really well, the other team just played a little bit better today. But we have a long way to go, a lot of points out there to be had and I know that they’re going to come back fighting really strong.”