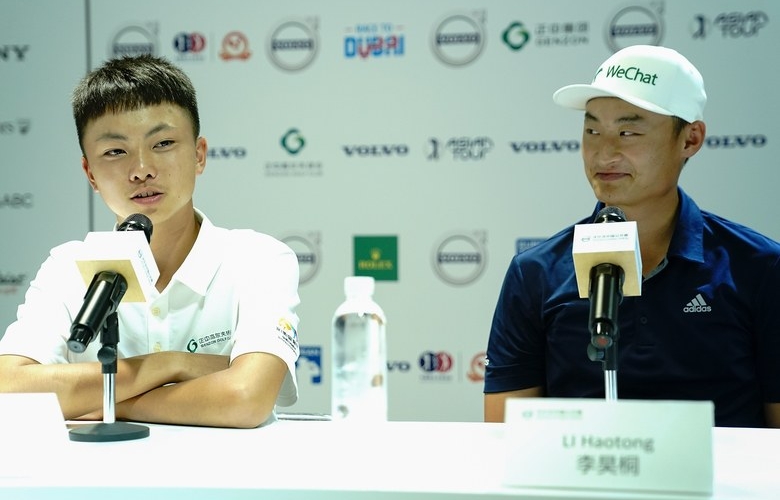 Lintao Zhang
Yang Kuang and Li Haotong of China attend a press conference during the pro-am prior to the start of the 2019 Volvo China Open.

The Chinese phenom fired a one-under-par 71 at the Volvo China Open, putting him in position to play the weekend in his Euro Tour debut. Kuang is currently in a tie for 69th place at Genzon Golf Club.

Kuang’s round included an eagle two on the par-4 14th along with four birdies. He also mixed in five bogeys, but we’ll excuse him. You know, because he’s FOURTEEN.

Kuang qualified for this event by winning the Volvo China Junior Match Play Championship in December. And he has already played in three PGA Tour Series China events, most recently making the cut two weeks ago at the Haikou Championship. But this is Kuang’s first crack at European Tour competition, not that it seemed to phase the youngster on Thursday.

Of course, Kang isn’t the first 14-year-old golfer from China to make noise. In 2013, Tianlang Guan made the cut at the Masters at the same age, but his career hasn’t taken off like many expected. Now 20, Guan is currently a sophomore on the University of Arizona golf team.

For now, Kuang is still concentrating on high school.

“Unfortunately, I don’t have a lot of time to practice as I have just finished my mid-term test in school and this week I only played two rounds,” Kuang said at his pre-tournament press conference. “I am still young, so school is still my main focus. On top of that, I can get 15-20 hours of golf every week.

“I know it may not be enough but I am still young and still have lots of potential to improve.”

Talk about an understatement.