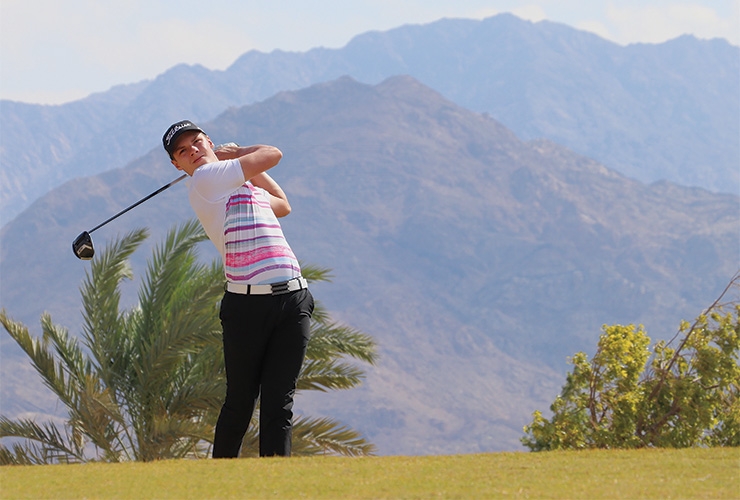 MENA Tour amateur order of merit leader Curtis Knipes stumbled to an 83 at Portmarmock to shockingly miss out on a place in the matchplay phase at the Amateur Championship. File pic courtesy MENA Tour.

By Kent Gray
It was a day to forget for those with Middle East connections at the 124th British Amateur Championship in Ireland on Tuesday.

Following a four-over 75 at The Island near Dublin on Monday, Rayhan Thomas needed something special in the second round of strokeplay qualifying to advance to the matchplay phase of the R&A’s premier amateur men’s event at the third time of trying. Sadly the region’s highest ranked player at No.14 in the world amateur rankings blew out to a 79 in his second round at Portmarnock to finish 219th in the 288-strong field at 11 over par.

The Indian 19-year-old’s Dubai colleague Josh Hill had little chance of advancing in the top 64 after an opening 82 at Portmarnock. The Trump Dubai 15-year-old at least improved with a 75 at The Island yesterday but still finish +14 for the championship in 256th place.

Even MENA Tour amateur Order of Merit leader Curtis Knipes had a horror Tuesday, falling from a share on 9th after the opening round to 179th place. After opening with a one-under 70 at The Island, the Englishman tumbled 169 places and well out of contention on Tuesday with an 83 at Portmarnock.

England’s Thomas Plumb and Dane John Axelsen shared top spot in stroke play qualifying at -4. Plumb was declared the leading qualifier on back nine count back after posting 71 in his second round at Portmarmock. The matchplay knockout begins today at Portmarnock.