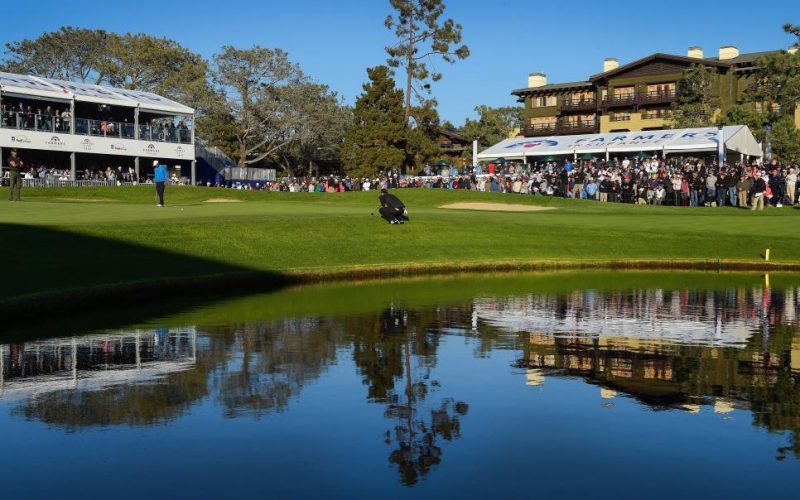 By Tod Leonard
On the eve of the 2020 Farmers Insurance Open in late January, the tournament’s executive director, Marty Gorsich, had every reason to be in a lively mood. He had an attractive field that included Tiger Woods. Corporate and ticket sales were booming. After a decade of trying to dig the event out of a deep financial hole, the operational finances were going to fall into the black.

But Gorsich, a forward thinker, was like the guy sitting on the beach in the warm sunshine while knowing a tidal wave was building at sea. The coronavirus pandemic was only a few weeks away from social and economic devastation in the United States, and Gorisch knew the business of sports would pay a heavy price.

“I’ve told my people,” Gorsich said in January, “that this will come down to BV and PV—before vaccine and post-vaccine.”

He could not have been more prescient. Nearly nine months after COVID-19 took its grip on the country, vaccines for the public are on the near horizon, but it will still be many months before sporting events look like they did before the pandemic. The PGA Tour and professional golf were able to return earlier than most to at least stage tournaments, but it’s becoming clearer that there still won’t be any sense of normalcy as the calendar turns to 2021.

The PGA Tour’s West Coast Swing—always a signal of the new golf season, even after the tour went to a wraparound schedule—will look like much of the circuit has since its return to play in June: made for TV, without the familiar buzz from the gallery.

On Monday, Gorisch and the Farmers Insurance Open—which frequently serves as Woods’ season opener—announced that they will not have any fans onsite at Torrey Pines when the tournament is played Jan. 28-31. That followed previous announcements of no spectators at the Sony Open in Hawaii (Jan. 14-17) and the American Express in La Quinta, Calif. (Jan. 21-24). The new year’s first event, the Sentry Tournament of Champions in Maui (Jan. 7-10), has said it will limit a small group of fans to a hospitality area. 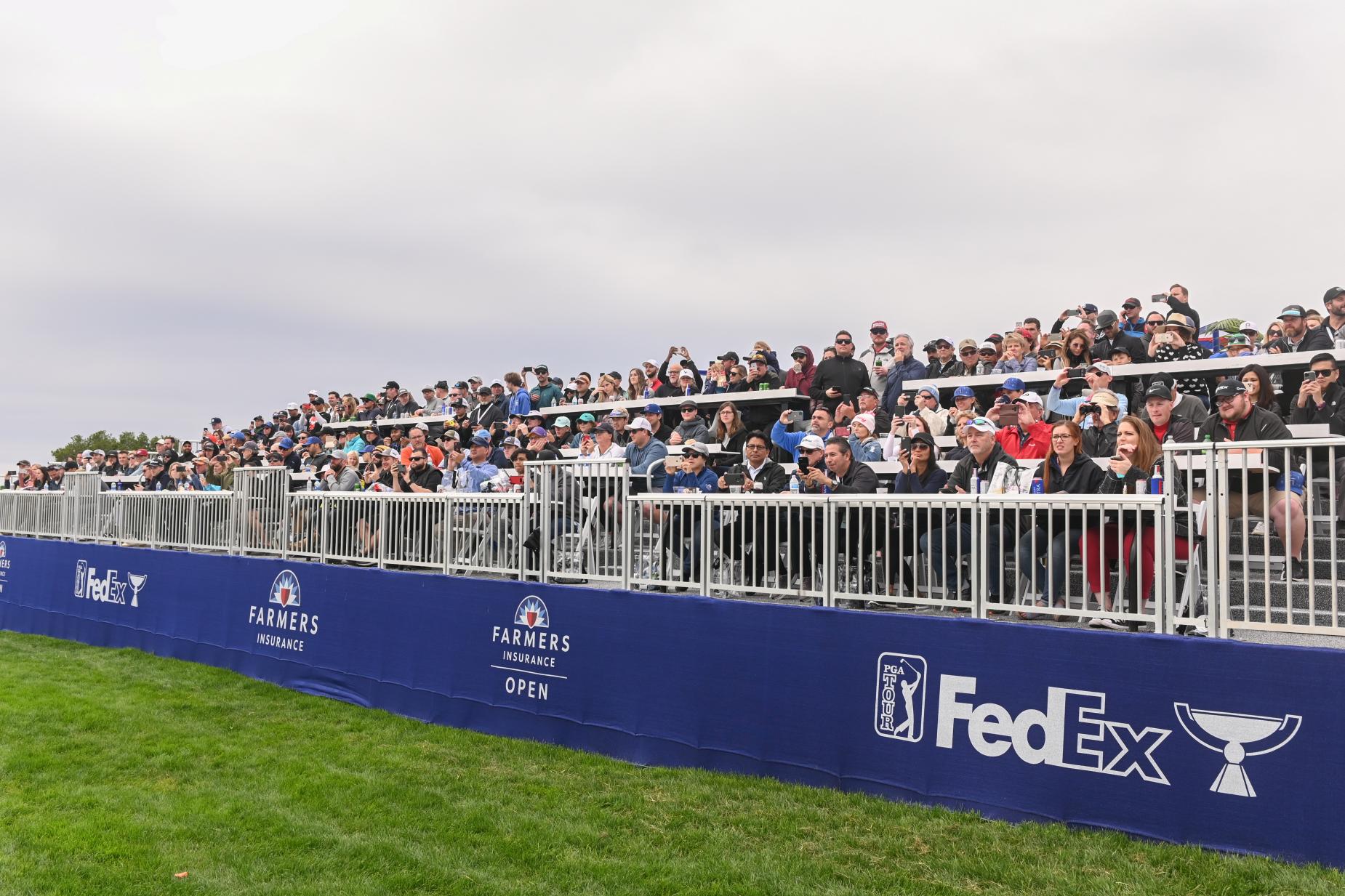 Ben Jared
Fans watch play on the 16th tee box during the final round of the 2020 Farmers Insurance Open.

The AT&T Pebble Beach National Pro-Am (Feb. 11-14) and the Genesis Invitational in Los Angeles (Feb. 18-21) have not made announcements about their 2021 plans, but it is highly unlikely that they would be able to allow fans, given that their cities are currently in the most restrictive of California’s COVID-19 tiers and coronavirus cases are at their highest levels in the state since the pandemic began.

The Waste Management Phoenix Open (Feb. 4-7) said in October that it would be far scaled down from its usual massive crowds, but Arizona also is seeing a steep rise in cases, and the Arizona Cardinals announced last week that they would not allow fans at their Dec. 6 home game after previously having a limited number at games.

In an interview with Golf Digest, Gorsich said not having fans and the revenue generated from hospitality and concessions will be “crushing” for the tournament financially, but there were no options.

“I feel like the journey we’ve been on for the last nine months … there are so many things you could see if you’re level-headed, and thinking with your head and not your heart, you could anticipate this,” Gorsich said. “We’ve been talking about a second wave for months.”

The blow of no fans will be lessened, Gorsich said, because the County of San Diego did give its approval last week for pro-ams to take place on Monday and Wednesday of Farmers week. “To not have pro-ams would have been another big hit,” he said. “Getting pro-ams was a big win for us.”

The Tournament of Champions, Sony Open and American Express also will have pro-ams, and it figures that Riviera and Pebble will, too, if their local governments approve.

At the Farmers, pro-am participants pay about $8,000 to play on Wednesday and $4,000 on Monday. Of course, the experience will be very different this year, with only the golfers, the professional and his caddie allowed on the grounds, though Gorisch maintains that it can be a more enjoyable and “intimate” experience. There are no in-person draws parties, and at Torrey Pines the amateurs will warm up in indoor simulators at a nearby hotel.

With a late start on selling pro-am spots and half of his usual participants coming from outside of San Diego, Gorsich isn’t sure what the response will be, but he also knows there is a pent-up demand for corporate entertainment.

“You get a little nervous about what the market will bear,” he said, “but the flip side is that there’s an increase of interest in playing golf and for these corporate people, there’s not a lot of experiences they can give their clients right now. You can’t take them to a ball game or a big steak dinner at Ruth’s Chris.

“We may not be able to provide everything we’ve given them in the past, but the reality is that we can provide something that is far superior to anything else people can access now.”

As with most tournaments that have been played since the tour restarted after a three-month hiatus, Torrey Pines will look very different. Last year, the Farmers built 300,000 square feet of hospitality, concession and operational tenting. This year, Gorsich said, that number will be 7,000 square feet, including moving volunteer and media centres to a nearby hotel. Media representation will be limited to about 40 people—down from 350 during a normal year. 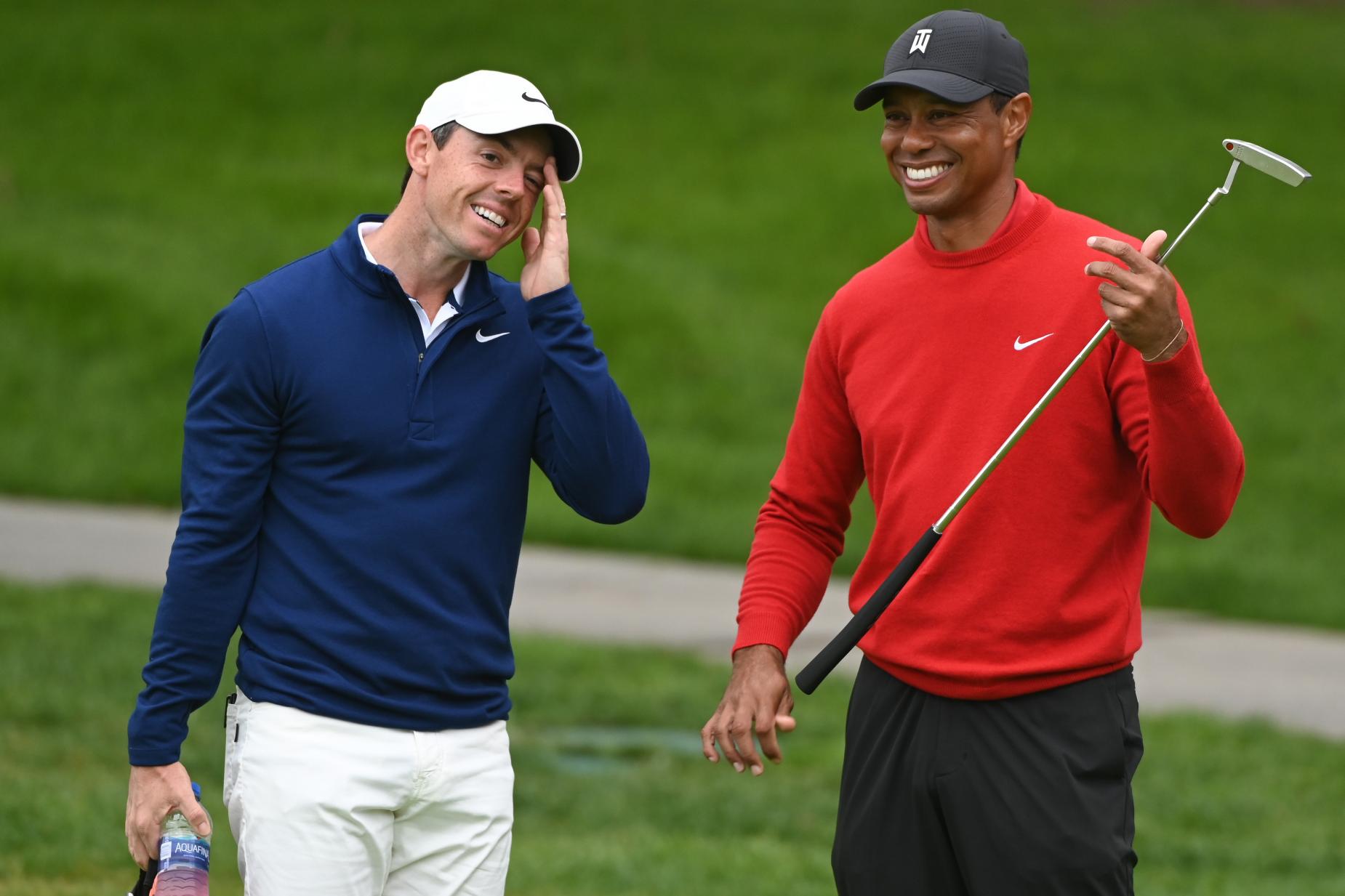 Ben Jared
Rory McIlroy and Tiger Woods shared laugh at the 2020 Farmers Insurance Open. The event hopes to have both back playing in 2021.

The volunteer force will be about 450, with many on the course acting as ShotLink workers or spotters. Gorsich said there will be an emphasis on spotting, given the deep rough featured at Torrey Pines, so as to avoid incidents such as the one Bryson DeChambeau suffered at the Masters when he couldn’t find his tee shot and suffered a penalty.

Torrey Pines, of course, has a more sizeable golf event scheduled for June—the U.S. Open. With that major in the offing, Gorsich is hoping to feature one of the Farmers’ strongest fields ever. He hopes that Woods, if healthy, will return to the event that he’s won seven times, and that fan favourite and San Diegan Phil Mickelson comes back. World No. 2 Jon Rahm is a past champion, and No. 4 Rory Mcilroy had a strong showing in 2020 with a T-3.

On Gorsich’s wish list are players who don’t normally come to San Diego: DeChambeau, Dustin Johnson, Justin Thomas and Brooks Koepka. But the hopes for some of them took a hit last week when it was announced that DeChambeau, Johnson and Mickelson have committed to the Saudi International, for which they receive hefty appearance fees, in the week after Farmers. Their absences also affect the Phoenix Open.