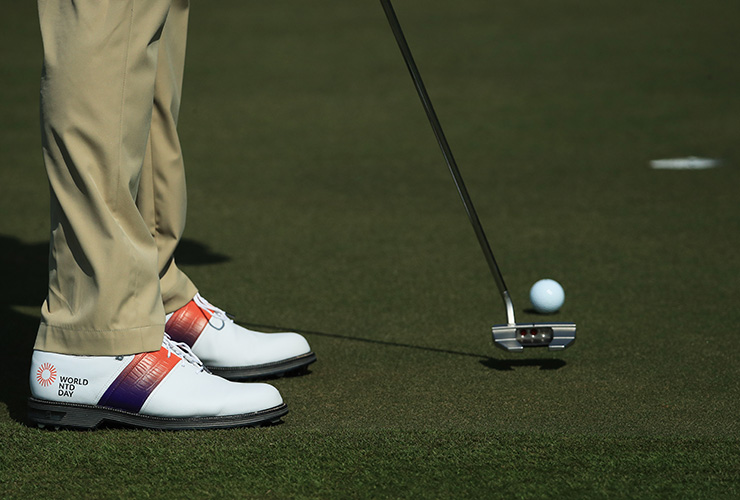 By Kent Gray
Justin Thomas wasn’t feeling it on Abu Dhabi Golf Club’s greens Thursday but the American’s debut round at the Abu Dhabi HSBC Championship was far from a good walk spoiled.

Thomas (73), Tyrrell Hatton (65) and Ian Poulter (71) all sported bespoke shoes in Thursday’s opening round in support of the “Reaching the Last Mile Fund’, the European Tour event’s official charity partner.

In partnership with the Crown Prince Court of Abu Dhabi, #EndTheNeglect initiative helped highlight World Neglected Tropical Diseases Day. The trio wore shoes featuring a range of designs in the colours of the charity with the slogan #EndTheNeglect.  Check them out:

The initiative to end river blindness delivers prevention and treatment across seven countries in Africa and the Middle East.

The shoes, designed by Soles for Sir, will be auctioned at charitystars.com with all funds raised going directly to the cause.

The UAE and its leadership have been committed to fighting NTDs for over 30 years. In 1990, the UAE’s late founding father Sheikh Zayed bin Sultan Al Nahyan made a personal donation of $5.77 million USD to The Carter Center’s efforts to eradicate the NTD Guinea Worm disease. Sheikh Zayed’s donation began a decades-long commitment by Abu Dhabi’s ruling family to disease eradication.

The UAE’s strategy for disease elimination is to help keep preventable diseases at the top of the political agenda, maintain progress made so far, raise funding levels, and work closely with global partners and multilateral initiatives to increase impact.