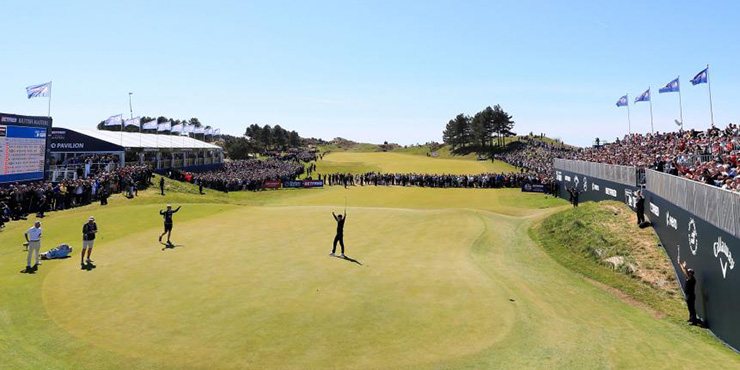 Marcus Kinhult celebrates holing a putt for victory on the 18th green during the 2019 Betfred British Masters. The tournament is expected to be the first the European Tour plays when it resumes its 2020 schedule in July. (Andrew Redington)

By John Huggan
As preparations continue for the return of the PGA Tour next month in the midst of the COVID-19 pandemic, things have been contrastingly quiet on the other side of the Atlantic. So far, 21 European Tour events (including majors and World Golf Championships) have either been postponed or cancelled. The British Masters at the end of July is, as it currently stands, the next event on the truncated schedule.

Still, things are happening behind the scenes. In a memo sent to all European Tour members on May 7 and obtained by Golf Digest, European Tour chief executive Keith Pelley assured his constituents that his team is “ensuring all the necessary safety protocols, including robust testing and hygiene processes, are in place in preparation for play. We also continue to work round the clock on all aspects of our schedule to provide you with as many playing opportunities as possible once it is safe to resume and we are permitted to do so.”

Pelley also promised to bring “definitive news on the schedule in the very near future,” one he claims will be “robust.”

On that front, however, there was less detail. But according to two sources with knowledge of the situation, the tour is preparing to begin its restart with a month-long United Kingdom-based “bubble” that includes the British Masters at Close House and continues with three more €1 million events at Forest of Arden, Hanbury Manor and Celtic Manor (all three of which have large hotels on-site to house players). The plan is expected to be announced in the coming days, according to the sources. At the time of publishing this story, the European Tour had not yet returned Golf Digest’s request for comment.

Rather than get into schedule specifics, the 784-word May 7 memo focused on administrative matters recently discussed and passed by the tour’s Tournament Committee.

All members’ 2020 categories, and their ranking within their category, will be retained in 2021 with related playing rights being protected to the absolute maximum possible in the 2021 season. “To put any member in a position where they feel they have no alternative but to play in certain events in certain countries to protect their livelihood, is not right,” Pelley wrote.

Similarly, it was felt unfair to disadvantage any member who might want to play in an event but who might not be able to due to ongoing travel restrictions. So this year, there will no longer be a minimum tournament requirement.

None of the above, it should be noted, is set in stone. “I wanted to provide this information today to give you some certainty for next year, even though there remains a great deal of uncertainty about many aspects of this,” Pelley wrote.

Money, inevitably, is also talking long and loud in the Canadian’s ear. One of Pelley’s “key principles” for the remainder of the 2020 season is the fulfilment of broadcast and sponsor/partner contracts. As a result, “all tournaments that take place will count towards the 2020 Race to Dubai with our intention being to crown a European Tour number-one and Race to Dubai champion at our season-ending event.”

Some things have not survived the cull, however. Perhaps most expensively, there will be no European Tour Qualifying School this year, an event that raised nearly £2 million in 2019. And there will, understandably, be no promotion from the Challenge Tour.

In counterbalance, a need to recognize “exceptional performance” on the both the European Tour and Challenge Tour during the season will be in place. A number of spots will be held each week in 2021 tournaments for the highest-ranked players not otherwise exempt on both the final 2020 Race to Dubai and Challenge Tour rankings.

The full implications of these measures remain unclear in these uncertain times, but it is obvious that going forward the European Tour is going to look very different from what has so far been the norm. As Pelley previously intimated to his members, luxury items like courtesy cars and plush player lounges are likely to disappear. As a result, it would be naive to imagine that Pelley will not be subject to condemnation from at least some of his constituents.

“It does look a lot like Pelley is covering his tracks with regard to the schedule,” says one tour insider, who asked not to be identified. “Having said that, he can’t be making big promises and looking like a mug later on when he can’t deliver. Where he does deserve criticism is in the fact that he is, at heart, a marketing guy. And marketing guys spend money, which is what he has done. £850,000 went on re-branding the tour for example [over the past few years]. When you look at how desperate they are now, that looks like extravagance.”