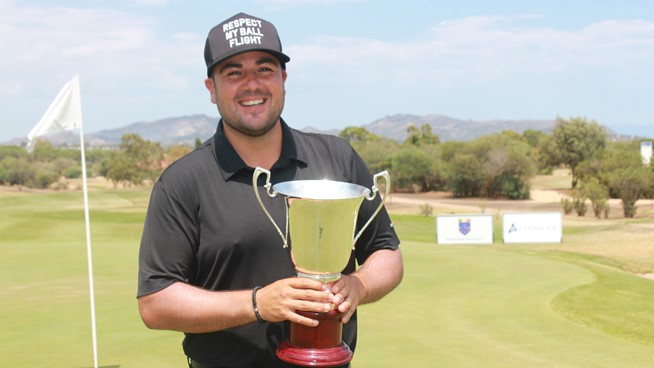 Courtesy European Tour – Joel Sjöholm never imagined it would take him 10 years to win a pro title and was relieved when he achieved it at July’s Italian Challenge Open.

By Kent Gray
With his trademark plus fours and penchant for extravagant colours to match, Joel Sjöholm doesn’t exactly present as a golfer looking to fly under the radar. But that is exactly what the 32-year-old Chile-born Swede is hoping for as he eyes a return to the Middle East this month for the final fortnight of the Challenge Tour season.

Sjöholm is on the cusp of a return to the European Tour for the first time since 2013 after capturing his maiden professional title, July’s Italian Challenge Open, after nearly 10 years in the play for your mortgage ranks.

A beloved character in the UAE where he was once attached to Atlantis, The Palm Dubai, Sjöholm must finish inside the top 15 on the Challenge Tour money list to secure a main tour card for 2017-18. He is currently  19th after worryingly slipping eight spots following a missed cut at the Kazakhstan Open and nearly repeating the unwanted weekend off at the Challenge de Espana where he finished T-63 and banked just €560. But he plans to play the remaining four events of the season, two of them in China. before returning to the UAE for the 2nd Ras Al Khaimah 2017 Golf Challenge (Oct. 25-28) and the season-deciding NBO Golf Classic Grand Final at Almouj Golf in Muscat (Nov. 1-4)

The normally media-friendly former Georgia State University star initially declined overtures for an interview for our October issue, politely promising full disclosure only once the potentially career reviving season is done. He relented slightly, or more accurately had his arm-twisted to front a wider media gathering at Jumeirah Golf Estates on Sunday, but was again economical with his crystal-ball gazing.

“I need to dig deep to get back on the European Tour and until I get there I don’t really want to talk too much about it,” Sjöholm told Golf Digest Middle East before elaborating on Sunday. “I want it so much but I just have to be careful not to want it too much, not to get too far ahead of myself.”

Sjöholm said he was still lerning how to be more ruthless when he gets into position down the “stretch on the back nine Sunday”. A key part of that process has been learning to be more focused on and off the course as he admitted he had failed to live up to his own high expectations as a “golfer or a person”. Indeed, he admitted he had “never really regarded myself as a professional golfer” despite a decade in the pro ranks.

“I want to be more cocky on the course and more humble off it. It’s a narrow line for me.”

The desire not to jinx anything is understandable after a run of lean years bouncing between the tours. Sjöholm has career earnings in excess of €1.1 million in Europe but nearly €840,000 was banked in a three year run on the main tour from 2011, including his career best collect of €412, 376 in 2012 headlined by enjoyed four top 10s, one of them a €185,185 payday for a T-4 finish at the Alfred Dunhill Links Championship.

The €48,000 Sjöholm won in Sardina in July was certainly a timely boost, eclipsing in one cheque the prize-money he’d earned in six of his previous seven years on the Challenge Tour.

But it’s more what the win did psychologically, not to mention on the Race to Oman standings where he lept 93 places up to fifth at the time. The now world No. 485 had missed three successive cuts leading into Is Molas Resort but closed with a 65 to overcame a two shot deficit and win by four from overnight leader Neil Bradley (Scotland) and Chase Koepka, the younger brother of U.S. Open champion Brooks.

Often typical of a player bouncing around tours, Sjöholm only got into the Italian event on a sponsors invite.

“It feels amazing,” he said afterwards. “I never thought when I was 10 years old that I would have to wait until I was 32 before I earned my first victory as a professional. It is close to being the best thing that has ever happened to me. Obviously having children and getting married will always be the most special thing, but this is pretty incredible.”

So to, we suspect, will be the interview when Sjöholm hopefully boomerangs back on the European Tour. The dictaphone is poised.