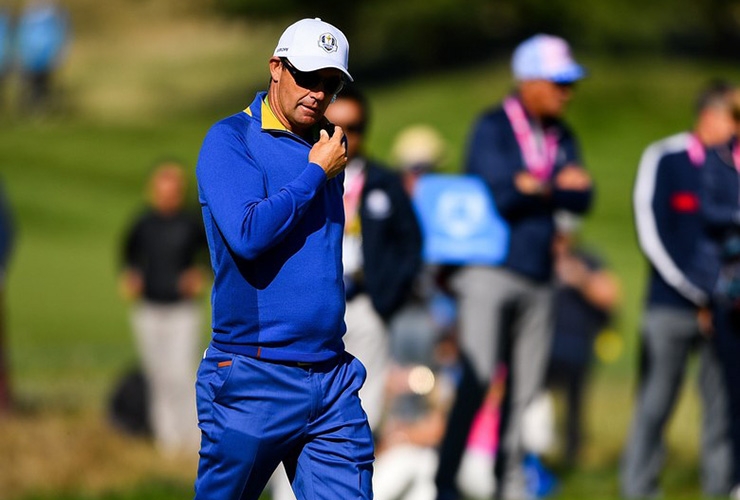 Ramsey Cardy/Sportsfile via Getty Images)
Pádraig Harrington during the singles matches at the Ryder Cup 2018 at Le Golf National in Paris, France.

By Dave Shedloski
Padraig Harrington made his Ryder Cup debut in 1999 at The Country Club in Brookline, Mass., which, despite the outcome, he said, “Still goes down as probably the most electrifying week I’ve ever had on a golf course.” But it was an incident at the 2004 matches at Oakland Hills Country Club near Detroit that best illuminates how he’ll carry out his duties as European captain when the 43rd Ryder Cup is contested next September at Whistling Straits in Wisconsin.

“I remember with Bernhard Langer, he sat there at the evening meeting after the first day’s play,” Harrington recalled, “and nearly the first words at the meeting—it was at a boardroom table—and he turns around and says, ‘Now, we’ll have nobody laying up into the hazard on No. 5 tomorrow.’ I was the only one who had laid up into the hazard that day.”

The three-time major winner went on to describe Langer’s hands-on approach as a captain, and though Harrington believes his style might be a mixture of the nine captains he has served under as a player or vice-captain, in the end, he figures to most emulate the laconic German leader who guided Europe to a record-tying nine-point win.

Like Langer, Harrington will have to formulate a plan to retain the cup that Europe recaptured in the previous outing. It’s likely to be a much stiffer challenge with the Americans ready for payback after a devastating seven-point setback at Le Golf National outside Paris—the second-largest defeat the U.S. team has ever absorbed.

That challenge now is roughly a year away. As part of the occasion, Harrington and U.S. captain Steve Stricker met Tuesday at Whistling Straits in Haven, Wis., to offer their thoughts on the next edition of the biennial matches, scheduled for Sept. 25-27.

A 15-time winner on the European Tour, including two Open Championships and a PGA Championship, Harrington has played on six of those teams, compiling a record of 9-13-3, and he has been a vice-captain for the last three matches, including that overwhelming performance in France.

RELATED: We are one year from the 2020 Ryder Cup so here are 8 extremely premature predictions for Whistling Straits

Asked what worked so well for his side last year, Harrington, 48, was careful in his reply, and then summed up his answer by saying, with a wide grin: “As you can see, I’m really trying to avoid anything that actually gives away what exactly happened behind the scenes. I’ve got to say, it was really a quality team.”

It’s too early to determine what the two teams will look like—and the Americans first will compete in the Presidents Cup this December in Melbourne, Australia, under captain Tiger Woods—but with a year to go, Harrington, who still competes on the European Tour and the PGA Tour, is feeling it is time to gear up on his preparations.

“We kind of turn a corner soon,” the native of Dublin, Ireland, said. “From now on, I think it’s going to turn more to my time with the team, my time getting to know the players and understanding what’s going on. I’m hoping from now on, it will be much more of what people perceived of what the captain’s job is of just, you know, watching his players, getting an understanding, getting a feel for what my captaincy … how I want my captaincy, what I want it to be like.

“It’s going to get more into the real Ryder Cup stuff, the stuff that I would be certainly more interested in, and the stuff that will hopefully make me a better captain when it comes around to the event in a year’s time.”

If it sounds like Harrington relishes digging into details, you’re not wrong. Guy Kinnings, the European Ryder Cup director, called Harrington “a deep thinker” who knows what it takes to prepare as a player in big events, be it majors or the Ryder Cup.

Who was the deepest thinker of all of Harrington’s predecessors? Langer, naturally. Again, not a bad leader to emulate. See Oakland Hills.

“I’d be more of the Bernhard Langer style of captaincy than the warm and fuzzy Ian Woosnam style of captaincy or Sam Torrance,” said Harrington, who admitted he wasn’t trying to bring new ideas to his role. “I will try and be the guy to put the arm around the shoulder, but I will definitely be more on the Bernhard Langer style of being practical, and try to be organised and give the guys as much help as I can.

“As the away captain, you are presented with certain options, the only options. Mostly about my captaincy would be just managing my team, the nine players and then the three captain’s picks. When I have that team … it’s managing their expectations during the week for what they are going to see and the ebbs and flows of the event.”

Harrington has seen it all, starting with his rookie year in 1999 when he thought he had secured the winning point after beating Mark O’Meara, only to see Justin Leonard sink a miracle putt on the 17th green during a stunning comeback.

Nothing is likely to surprise Harrington next year at Whistling Straits. Europe might be defending in America, but its captain, who, by the way, has competed in all three PGA Championships on the Straits Course, is likely to find footing on solid ground.