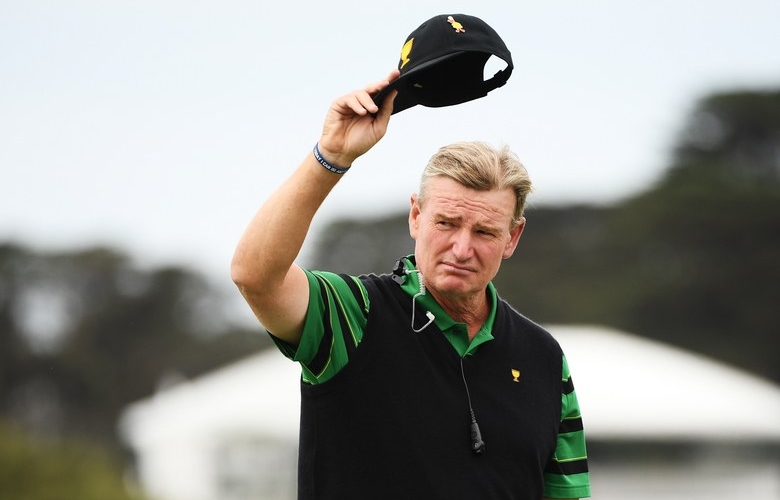 International’s captain Ernie Els acknowledges the crowd after they were defeated 16-14 following Sunday Singles matches on day four of the 2019 Presidents Cup at Royal Melbourne on December 15, 2019, in Melbourne, Australia. (Photo by Quinn Rooney/Getty Images)

By John Huggan
MELBOURNE — In hindsight, always the clearest view of all, the 13th Presidents Cup started to go wrong for the International side late on Saturday evening. On the 18th green in the last match of the fourth session, Byeong Hun An stood over a seven-foot, two-inch putt that would give his team a three-point edge. But it wasn’t to be. Not the South Korean’s best effort, the ball missed low and left.

So it was that the United States, deeper, stronger and more experienced top to bottom, had only a two-point deficit to overcome in the 12 singles of the fifth and final session of play. It didn’t look like enough. It didn’t feel like enough. And in the end, it wasn’t enough.

International captain Ernie Els actually had mixed feelings at that stage. On the plus side, his team had achieved a pre-match target: 10 points by Saturday night. But nagging at the South African was a feeling that the 10-8 advantage should have been bigger, never mind An’s missed putt. Els’ mind went back to Friday’s play when, already up 4-1, the Internationals were ahead in all five foursomes. A 9-1 lead—what would have been a “knockout blow,” according to Els—loomed.

“That was probably the difference,” the four-time major champion said of what turned into a 6½-3½ scoreline. “We had so much momentum. We had so much going for us. But at the end they won the 18th hole twice and halved it once. That’s 2½ points, and we came up short by 1½.

“I wouldn’t say we totally lost momentum, but it was, to me, a bit of a blow,” Els said. “The team didn’t react in that way, which I was really proud of. But to me as captain—and I didn’t reveal it to the players—I felt we had them right in a headlock, and we didn’t quite finish it off. There’s not many times when you get a team like that [all 12 Americans are ranked among the world’s top 24] under the pump like that. It was great, but it could have been unbelievable.”

Still, looking forward, things appear a lot more positive from an International point of view. Els’ team contained seven rookies and was overall the youngest ever in Presidents Cup history. Only four won’t see their 30th birthdays again. So the future looks bright, with the likes of Sungjae Im, Abraham Ancer, Cameron Smith, Joaquin Niemann and An all likely to be better players two years hence, when the 14th Presidents Cup takes place at Quail Hollow.

“We gave it a hell of a go, and we came mightily close to winning and upsetting one of the greatest golf teams of all time,” Els said. “If you look at their records and where our guys are at the moment, they are going places. We have major champions up here [on stage]. I can only see them all heading upwards in a big way.”

There was, however, also a hint of discord amid Els’ pride at how well his men had played and how optimistic he is for the future of the International side. Unlike the Ryder Cup, where the two teams are administered by the PGA of America and the European Tour, the Presidents Cup is a creation of the PGA Tour. As such, making the rules and setting the guidelines are matters for commissioner Jay Monahan and his staff.

In other words, the biennial contest between the U.S. and the Internationals is a bit like a World Series in which both teams are owned by one man—and he plays favourites. Els was clearly reluctant to say too much on the subject or speak too much out of turn, but his frustration with how things are done behind the scenes was evident.

“It’s hard to explain, but we need to be separate. That’s a long process. I don’t think it will happen very soon. But the Ryder Cup works because the Europeans do their own thing and the U.S. do their own thing. We’re trying to do it under one umbrella, under the tour’s office, under their roof. There’s a lot of things that clash.”

Indeed, it is well known that Els’ immediate predecessor, former Open champion Nick Price, was forced to argue long and hard for a reduction in the points available in the Presidents Cup. And this year the cosmopolitan Internationals for the first time had more of a common cause. Playing under a common badge, a shield-like image adorned all of their bags and clothing. Which is great. But permission for that change had to come from the PGA Tour’s Policy Board.

The bottom line? “Us against us” is a lot less interesting than “us against them.” And until that basic problem is addressed, the Presidents Cup—in which the U.S. now owns a dominant 11-1-1 record—will only occasionally be either as interesting or competitive as it’s older, trans-Atlantic brother.