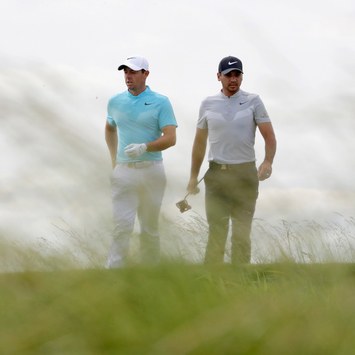 Any minute now, the U.S. Open will begin. So far it has been a nice walk in the sun. Soon it becomes an exercise in high anxiety. Today I heard an amateur speak of winning the thing. Any minute, that amateur will pray to God that he might hit even one shot semi-straight. This is the big leagues and children should mind their manners. Consider, for instance, the cases of Rory McIlroy and Jason Day, the world’s No. 2- and No. 3-ranked players.

Major champions both, both missed the cut here and missed it badly, McIlroy with 78-71—149, Day with 79-75—154. This on days when Erin Hills treated competitors as kindly as it is likely to treat them. From here on, especially if the sun stays bright and a nice breeze dries the place, Erin Hills will be a bear. The fairways will firm up, allowing drives to run into tall fescue that promises punishment. The greens will firm up and refuse to accept shots they so far have embraced. On those firm and fast greens, we will see if our heroes are brave enough to run putts at cups cut in places chosen for their perils.

In two rounds, even before conditions and circumstances transform Erin Hills from charmer to scourge, the golf course established its bonafides. If any player had a complaint about the layout and/or set-up, it was done in private. Erin Hills, though barely a decade old, seems to have been accepted as a fit and proper U.S. Open venue. Even on his way out, McIlroy praised the place for its demands as well as its simple, sprawling beauty.

“The golf course is great,” he said. “It’s a big, big golf course, with long rough and all that stuff, but it lets you play.” 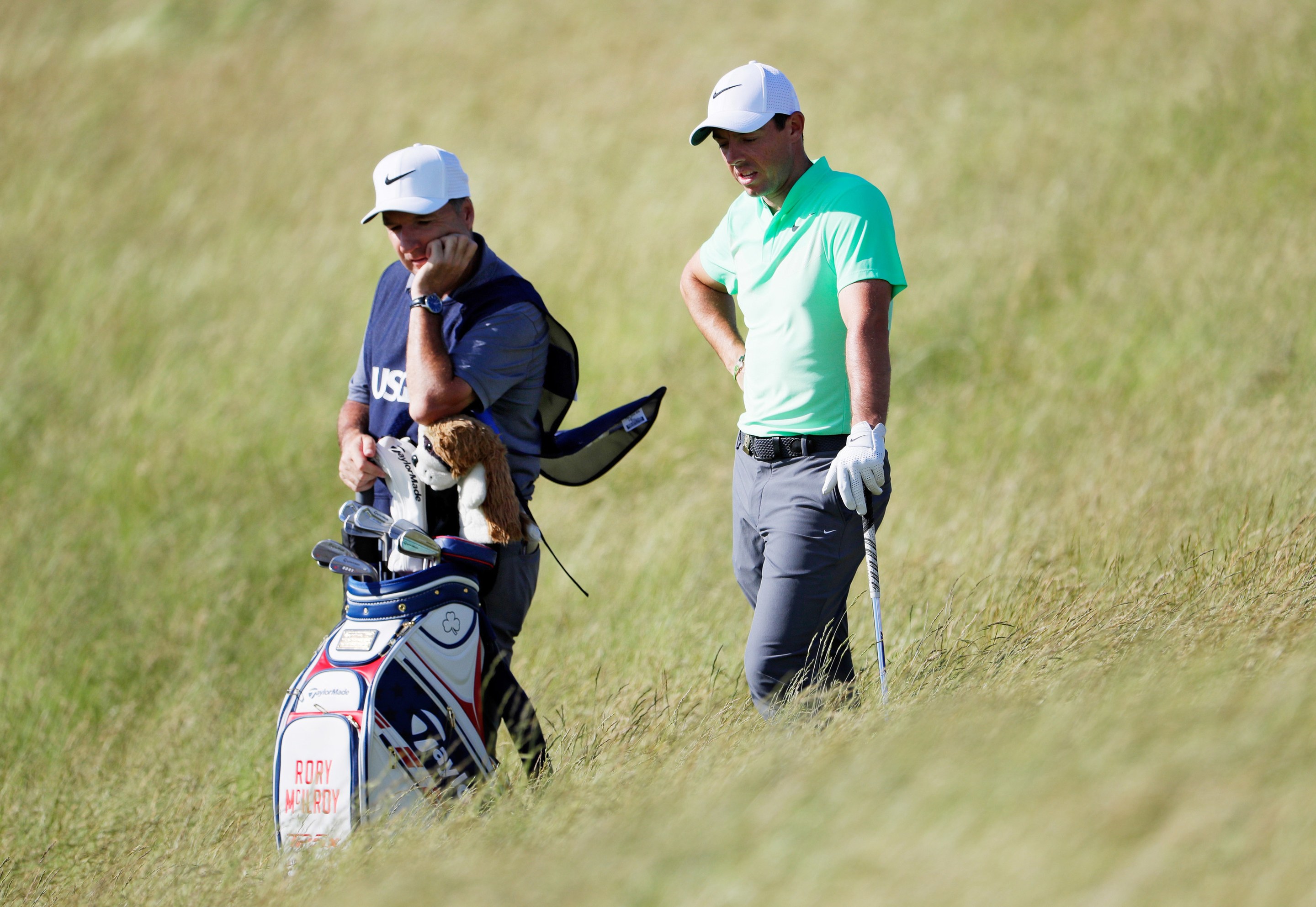 So what happened that McIlroy and Day will be among us watching on television this weekend?

Day said the Erin Hills fairways were just too wide.

This takes some explaining since ordinary folks prefer acres of room for error.

Traditional U.S. Open fairways come with hourglass-narrow passages squeezed between bunkers and penal rough. But not here. Seen from tees, most of them elevated, the Erin Hills fairways present no problems. The bunkers are largely unreachable, many of them 320 yards toward the distant horizon. The landing areas are big as all outdoors. We mortals like the idea of being in play if we happen to spray a tee shot, oh, like, y’know, 50 yards off-line.

But Day said, “The biggest thing about this course is that the fairways are massive.”

Hmm. Yes. They are generously wide and forgiving. How, exactly, is that a problem?

Because Day is no mere mortal but a major champion and 10-time winner on the PGA Tour, he likes, even needs, the hourglass-figure challenge of most Open fairways.

“When you’re trying to aim at a target usually at a normal golf course, with normal width fairways,” he said, “there’s some pressure into hitting the fairway because it is a lot narrower than we have out here. And I think, with everything so large, your target is larger and your misses get more extreme.” 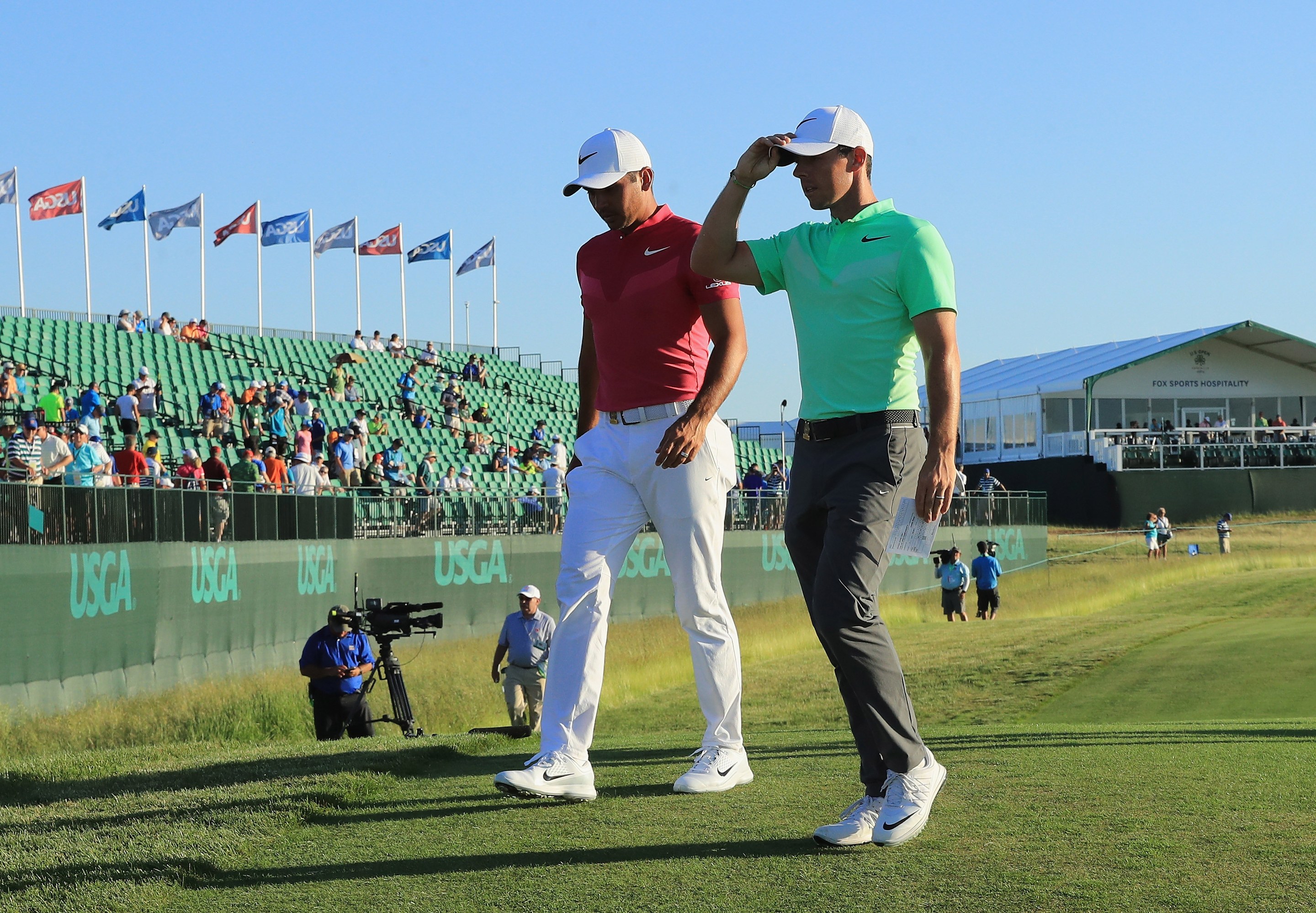 Numbers suggest the extreme nature of Day’s misses. He hit 9 of 14 fairways in the first round, 8 of 14 today. The 11 misses mean he often sprayed drives into Erin Hills’s tall fescue. Or, as he put it, “I was in the hay too much.”

McIlroy began this Open full of confidence. He saw the wide fairways as path to victory. They played to his greatest strength as perhaps the game’s best driver, longer than anyone who hits it straighter and straighter than anyone who hits it longer. He was even so bold – no one becomes a four-time major champion by being shy – as to say the generous fairways helped him because they would force lesser drivers to press for distance.

And then he stepped to the first tee on the first day of the U.S. Open.

And the game’s best driver hit four of 14 fairways.

The U.S. Open happened, as McIlroy himself said: “Everything was in good shape. But you never really know until you put a card in your hand and you’re under the gun a little bit. And some of the weaknesses and flaws that are in my game at the minute showed up over the last couple of days.”

McIlroy finished Friday’s round – hitting 10 fairways — on a spectacular run with birdie putts on the last six holes, none longer than 12 feet. He made four of them.

Alas, he said hello when it was time to say good-bye.

So his plans now?

“This is not your typical U.S. Open set-up,” McIlroy said. “But I’m a big fan. I think it’s going to produce a really good winner. … I’m looking forward to how it unfolds over the weekend.”

And Day’s plans for the weekend?

“I’ll get to sit in air-conditioning,” he said, “and watch the guys tear it up.”