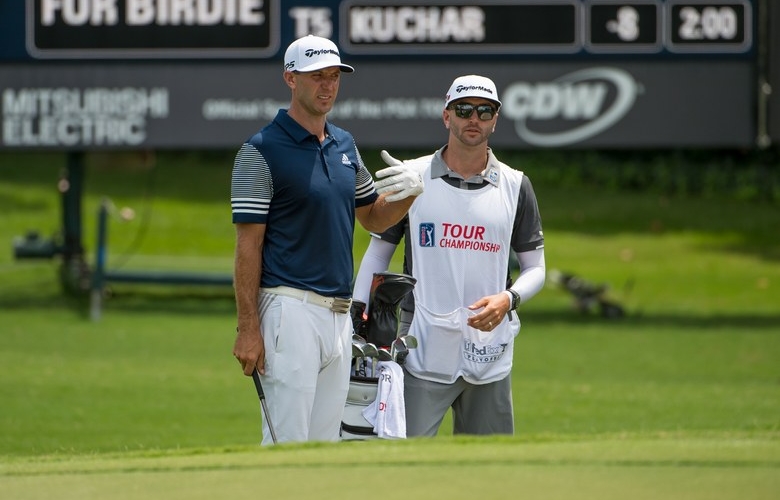 By Joel Beall
ATLANTA—You’re forgiven for thinking the hand on the “Don’t give a damn” metre was low Saturday morning. Even in the heat of Sunday afternoons, Dustin Johnson’s complexion exudes disinterest, so starting his Saturday 15 shots back of the lead—coupled with the last-day-of-school ambience that permeates this tournament—well, there was a question if Johnson would show up to the first tee in flip flops.

Yet there he was on the range more than an hour before his tee time in humidity so oppressive it made golf’s coolest customer sweat. For nearly 40 minutes, Johnson smacked wedge after wedge, each shot conferring with coach Claude Harmon III and the adjacent TrackMan, never happy with the result or the numbers the machine produced.

“You got to get them ahead,” Harmon said to Johnson about his hands, visibly demonstrating the position Johnson was in and where he needed to be.

Johnson nodded, hearing the answer he already knew. He’s been hitting just 67 percent of greens 125-to-100 yards since the U.S. Open (versus the tour 74.39 percent average). Under 100 hasn’t been much better, ranking 82 out of the 124-player Northern Trust field, and T-30 in this category last week at the BMW Championship.

More wedges to a pin that sits just over the lake that separates the practice tee from the range followed, none quite to Johnson’s liking. He pulled out the driver to the delight of the crowd, but bashed just three pearly whites into the ether before going back to his wedges. This was a man on a mission.

Eventually, he departed to the first tee, where he launched a 308-yard drive to the left side of the fairway, the perfect angle to Saturday’s back right pin. He was left with a shot that he had just practised for the previous 80 minutes.

Johnson took an easy, abbreviated backswing and fired. It was a mis-hit, amplified by a right-to-left wind, leaving Johnson 30 yards away from the flag. Johnson looked at his wedge, then up to the sky. 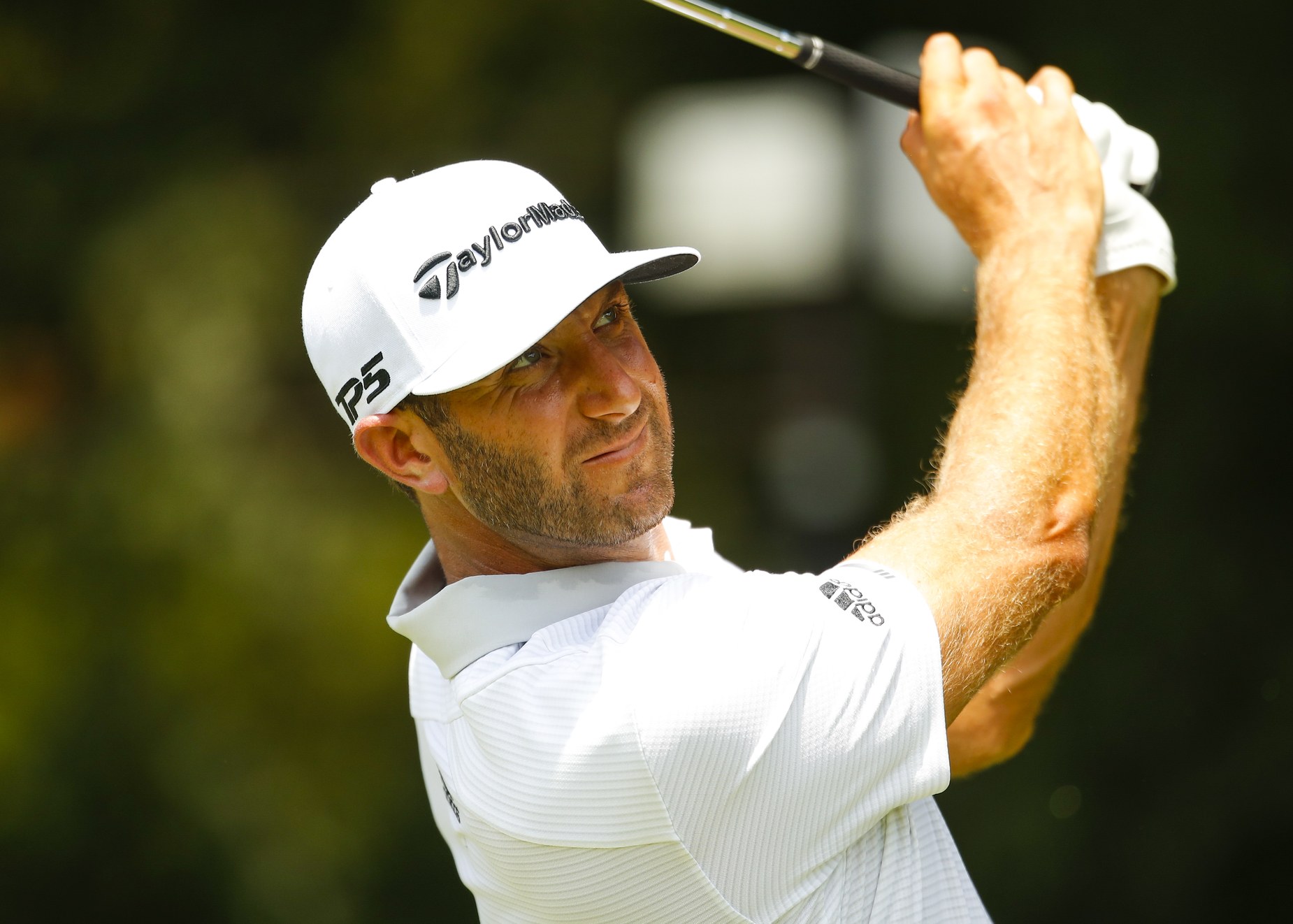 Dustin Johnson is the No. 2 player in the world. At the moment, the gap between him and No. 1 Brooks Koepka seems like a galaxy.

That’s not how the season started. Johnson displayed his usual dominance, posting seven top 10s in his first 10 starts in 2019. That included a tour de force display at the WGC-Mexico, only Rory McIlroy coming within 10 shots of Johnson’s 21-under score. It was his 20th career victory, becoming just the fifth player in the past 50 years to reach that benchmark before 35. If that wasn’t enough, Johnson joined just Tiger Woods, Jack Nicklaus and Arnold Palmer as the only guys to win in each of their first 12 tour seasons.

Also in those top 10s: a T-2 at the Masters and a solo runner-up at the PGA. The latter was almost history; a Sunday charge, aided by Koepka mistakes, turned a seven-shot deficit to one with four holes to play. But Johnson bogeyed the 16th and 17th at Bethpage, and parred the final hole when he desperately needed birdie. He would fall two short of Brooks.

“I’m very pleased with the way I played, and where my game is at,” Johnson said that Sunday in Long Island. “I gave it a run. That’s all you can ask for.”

Johnson expressed hope for Pebble Beach and Royal Portrush, asserting both were tailored to his game. On the way out, someone asked Johnson if he or Koepka was the best player in the world.

No one told him: with his second Wanamaker in hand, Koepka had knocked Johnson from the top spot.

Johnson has done nothing in the ensuing months to challenge Koepka’s throne. While Koepka made valiant charges at the U.S. Open and Open Championship and added a WGC title to his ever-expanding résumé, Johnson has gone sideways.

Since Bethpage, Johnson has zero top 10s, the longest stretch without a top 10 in a decade. He was earmarked as a favourite at Pebble, with two wins and eight top 10s at the AT&T Pro-Am, along with his strong 2010 U.S. Open that was sunk by a shaky Sunday. Instead he was an afterthought, going quietly with a T-35. He barely made the cut at Portrush, finishing T-51.

Those struggles have been pronounced over his last nine rounds. Leading through 36 holes at Liberty National Johnson stumbled on the weekend, a 74 and 73 dropping him to T-24. He was 67th out of 69 players in strokes gained/approach at Medinah, finishing 22 strokes (T-57) behind winner Justin Thomas.

East Lake beckoned as an elixir. He had placed sixth or better four of his last five appearances, and with the Bermudagrass rough longer than usual this year, Johnson’s prowess out of the thick stuff (25th in rough proximity) should have made him in a contender.

That’s not how the proceedings in Atlanta have played out. 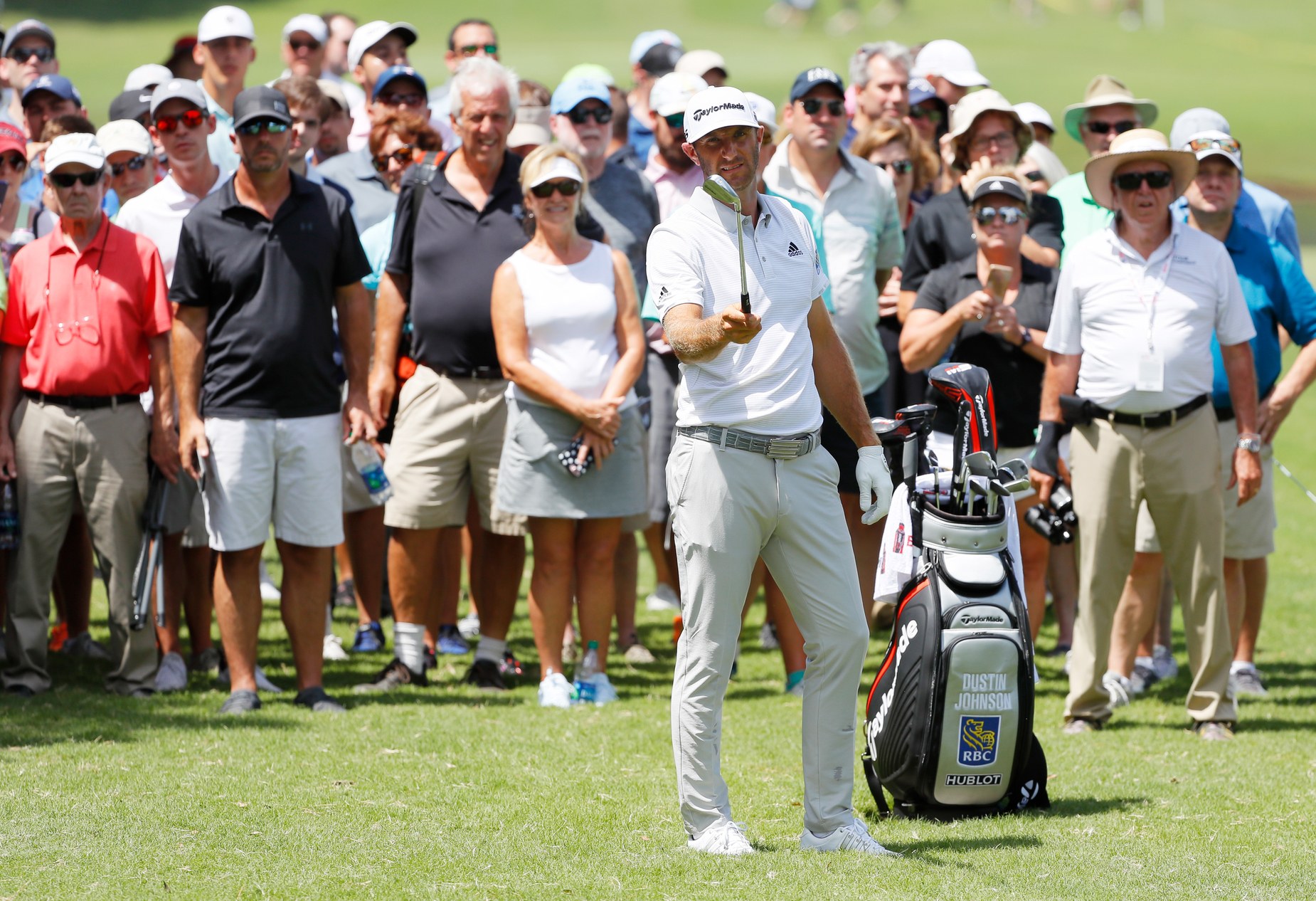 He started out with a 73 and 72 at East Lake before ejection on Saturday. He followed his opening bogey with seven pars, but bogeyed three of the next four holes and plunked one in the water on the 15th. The final damage was a five-over 75. While he’s leading the tournament in sg/off-the-tee, he is 29th in sg/approach and 30th in sg/putting. Only Lucas Glover is lower on the leader board; subtract the staggered start, Johnson has the worst score of the week.

Slumps, even to the stars, happen. (See Spieth, Jordan.) If anything, Johnson’s dry spell underlines how ridiculously consistent he’s been for the past 10 years.

Conversely, Johnson is completing his Age 35 season. Phil Mickelson and Justin Rose have shown players can age gracefully into their late 30s, and though many view DJ through a basher-only scope, he’s proven to be much more.

His prime, however, is no longer an open-ended notion.

That this slide is coinciding with Koepka’s rise—becoming the player Johnson was perceived to be—could be happenstance. Still, as the sirens blew on Saturday afternoon halting play, it felt like something more. Koepka, entering East Lake’s regal, majestic clubhouse, fighting Rory McIlroy, Justin Thomas and Xander Schauffele for $15 million for a cap to his Player of the Year defence. Johnson, in the parking lot, packing up his courtesy car.

Johnson will be back tomorrow. He’ll be working once again on the range hours before the leaders, out of the spotlight. And for the first time in years, working to get back into it.

This new Tour Championship wasn’t perfect, but it worked

Play suspended for the day at East Lake, Justin Thomas leads by one as marathon Sunday awaits

Appreciate Rory McIlroy’s season for what it is, instead of what it’s not

The Tour Championship, its evolution and why Justin Thomas leads by two before a shot is struck