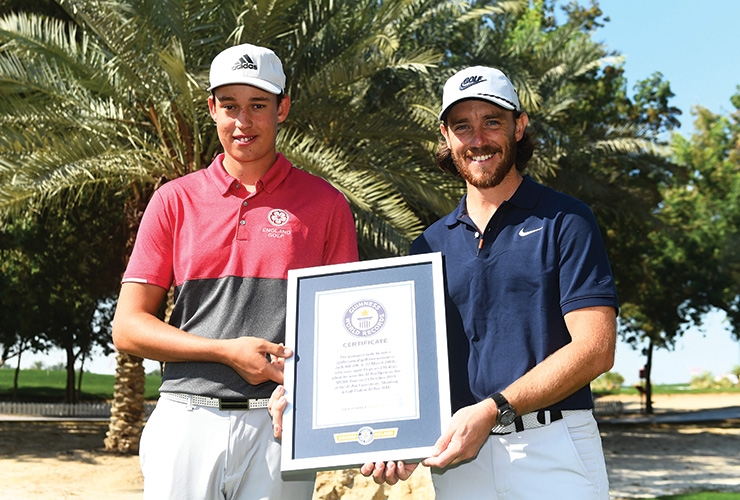 Josh Hill of England (L) poses with Tommy Fleetwood (R) after being presented with a Guinness World Record certificate for being the youngest male to win a professional golf tournament aged 15 years and 210 days ahead of the Abu Dhabi HSBC Championship. (Photo by Tom Dulat/Getty Images)

By Kent Gray
You might think beating world No.1 Brooks Koepka in a partial practice round would make Josh Hill’s European Tour debut an unqualified success already but the 15-year-old Dubai amateur is clearly only getting started.

The MENA Tour poster boy will play the first 36 holes of the Abu Dhabi HSBC Championship in the company of Masters champion Charl Schwartzel and rising Austrian star Mattias Schwab but doesn’t want the dream to end on Friday.

“It’s already been a success but just achieving what I want to achieve will make it a better success.”

They’re fighting words from a kid yet to sit his GCSEs but Hill is determined to eek everything out of the week of his young life so far. He’s handling all the attention with his usual deadpan demeanour.

“I actually feel more comfortable than I thought I would. I thought I’d turn up and everybody would be looking at me thinking ‘what are you doing here?’ But everyone’s just said really nice things. So I feel comfortable and can’t wait for Thursday.”

Whatever happens, Hill will never forget beating the world’s best player over eight holes on Monday. The lanky teen even managed to stripe a couple of drives past Koepka.

“On average I was 10 yards behind him but I did put it past him on a couple of holes, so that was good. Drove it past on 5 and 9, but he hit a bad drive there. [Still] I can officially say I’ve outdriven the world No 1, at least once,” Hill said.

“It was a great experience, obviously. Playing with the world No.1 you learn a lot of things. See how he practices, because I wasn’t sure if I was doing it wrong. It’s basically the same.

“He says he probably goes at four to five pins a round but the world No.1, you’d think he’d go at everything. Obviously I knew that before, but nice to
have it confirmed.”

Now the focus is putting those lessons into play before the biggest galleries he’s ever experienced, crowds that include his grandparents who have flown out from Spain.

“I’ve just got to concentrate on the golf, really. I can’t worry about what everybody else is doing around me. Just when I get on that first tee, to when I get off, just trying as hard as I can and see where that leaves me.

“I’ve watched Mattias before, at the Turkish Airlines Open, so quite excited to play with him. And obviously Charl has won a major, so to play with a major champion, it’s going to be a great experience on Thursday and Friday.

“Yeah, the week’s getting better and better. It’s just going up and up. I just hope it does keep going up on Thursday and Friday… and Saturday-Sunday.”