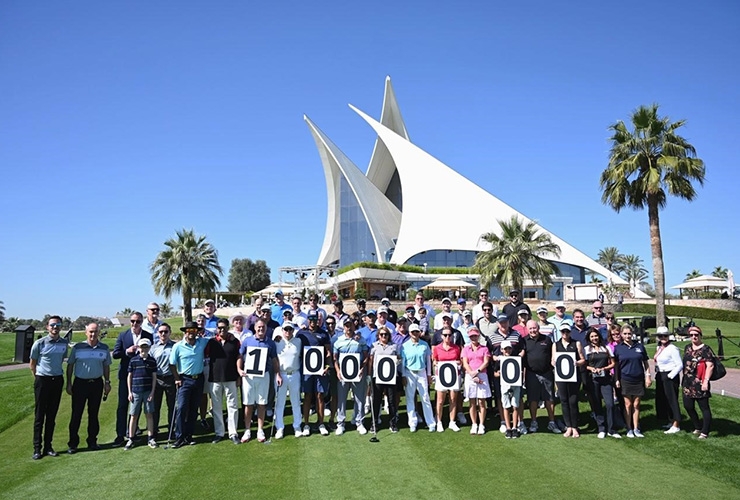 By Kent Gray
Dubai, UAE: If you’ve ever played the championship course at Dubai Creek Golf & Yacht Club, you now belong to a far from exclusive club.

The one million milestone was marked during the club’s annual Captain’s Day on January 18  where the traditional ‘drive-in’ by incoming captains Saeed Malik and Lianne Scatterty signified the start of the new season.

“Congratulations to all the Members and colleagues at Dubai Creek on this incredible milestone of 1,000,000 rounds played on the championship course,” Bjorn said.

“Today, the course remains the centrepiece of one of the most recognised golf resorts in the region and I am incredibly proud to have been part of the design process and contribute to the club’s reputation around the world.”

The ‘Creek’, as it is affectionately known, is one of the most influential courses in the Middle East as well as one of the most recognisable with its dhow sail-shaped clubhouse and tough holes hugging Dubai Creek.

It has twice hosted the OMEGA Dubai Desert Classic with Englishman David Howell and Argentina’s Jose Coceres winning the 1999 and 2000 editions respectively. The 6th hole is one of four hugging Dubai Creek.

In 2015 the course played host to the Icons Cup which featured a host of legendary names from a multitude of sports playing a Ryder Cup-style world v USA match captained by Darren Clarke and Fred Couples respectively.

Dubai-based amateur sensation Rayhan Thomas holds the Creek course record, a 10-under par 61 which featured a world record-equalling nine consecutive birdies during the second round of the MENA Tour’s Dubai Creek Open in September 2017.

“Over the years, the club has welcomed generations of families and friends and has hosted the best players in the world to enjoy the challenging layout and extensive facilities the club has to offer,: said Dubai Golf CEO Chris May.

“On behalf of everyone at Dubai Golf I would like to extend my warmest congratulations to the members and guests of Dubai Creek Golf & Yacht Club over the years on this historic milestone, and here’s to the next 1,000,000 rounds.”