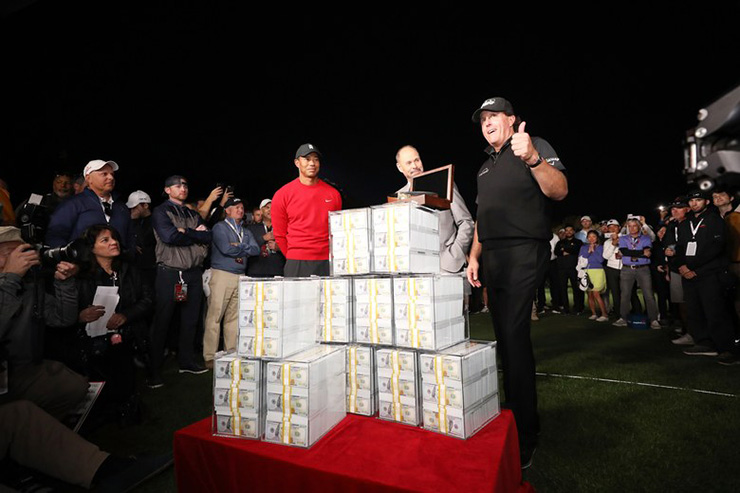 LAS VEGAS, NV – NOVEMBER 23: Phil Mickelson celebrates with the winnings after defeating Tiger Woods as Ernie Johnson looks on during The Match: Tiger vs Phil at Shadow Creek Golf Course on November 23, 2018, in Las Vegas, Nevada. (Photo by Christian Petersen/Getty Images for The Match)

By Stephen Hennessey
Turner Sports announced its viewership numbers from last Friday’s match between Tiger Woods and Phil Mickelson at Shadow Creek, and though the early returns are impressive, the most startling number is the amount Turner might’ve lost on a processing snafu.

In an interview with the Sports Business Journal, Turner president David Levy said there were 750,000 unique video views logged, and 55 million minutes consumed on B/R Live for “The Match.” But the glitch that made the pay-per-view event free to watch potentially cost Turner a $10-million total, according to SBJ.

“We are in this for the long haul,” Levy said. “We don’t have all the facts and figures, but based on early indications, the total audience for the match surpassed expectations across all of our platforms.”

Minutes leading up to The Match, the company lost the ability to process payments, so Turner decided to make viewing the match free for anybody who tried to purchase it. And subsequently, those who purchased The Match through cable providers Comcast and Spectrum were issued a full refund. Turner had reportedly paid $10 million for the event’s broadcast rights.

However, with the strong likelihood that the Tiger vs. Phil match will be the first in a series of matches between the two icons, as well as other tour players, the sentiment that the match was a successful experiment for Turner is not surprising. If it can also retain rights to broadcast subsequent matches, it seems like a win for the company. And Levy said Turner sold sponsorships to AT&T, Audi, Rolex, and Capital One, which sponsored the match, which was unexpected revenue to recoup the losses of the subscriptions. “All the sponsors want to come back,” Levy told SBJ. “They all were extremely happy with the event and the coverage.”