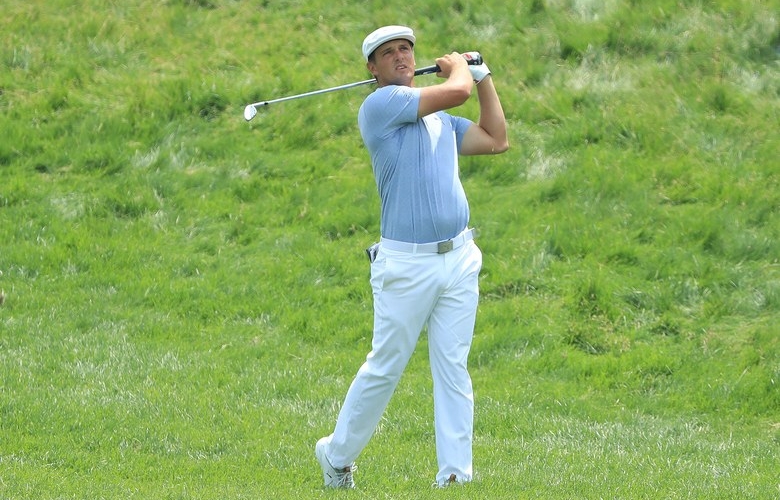 DeChambeau plays a shot on the first hole during the final round of the 3M Open at TPC Twin Cities on July 07, 2019 in Blaine, Minnesota. (Photo by Sam Greenwood/Getty Images)

By Keely Levins
Bryson DeChambeau and Brooks Koepka got headlines for their slow-play discussion at Liberty National last Sunday. Earlier in the week DeChambeau drew criticism for a series of long pre-shot routines during the Northern Trust, and he was passionate in his response. Things got a little more interesting when DeChambeau allegedly told Koepka’s caddie that if Koepka—who has been outspoken about the pace-of-play problems on the PGA Tour throughout the season—had an issue with him, then he should come and talk to him about it to his face. That statement, obviously, sounded like DeChambeau was picking a fight with one of the biggest dudes on tour. Interesting strategy.

Koepka and DeChambeau were guests for Pat Perez and Michael Collins’ SiriusXM PGA Tour Radio show, Out of Bounds, on Tuesday night to discuss the incident.

“People acted like the two of y’all were going to fight,” Collins said on the show.

“Let’s be honest, we know who would win that fight and it’s not me,” DeChambeau said. “Let me tell you right now he’d kick my ass.”

“We do know that,” Perez said.

The four guys diverted from the hilarious thought of DeChambeau attempting to fight Koepka to have an in-depth conversation about pace of play on the PGA Tour. Here are some highlights:

Guys who are slow don’t even know they’re slow.
Koepka made the point that a big reason it’s hard to fix slow play is because a lot of slow players have no idea they’re the culprits. He suggests players go watch tape of themselves.

“The guys who are slow have to figure out they’re slow,” Koepka said. “Go watch yourself, go figure it out and really realize what you’re doing.”

For change to happen, guys need to be penalised.
All three tour players agreed on this point, with the best way being to give stroke penalties for infractions on a type of shot clock.

“I’m all about penalizing,” DeChambeau said. “I’ve got no issue with penalizing people who are taking over their allotted time.”

Ready golf would fix some issues.
“I’d never be on the clock if I played ready golf, but sometimes I hit it farther than the guys I’m playing with, so I have to wait for them,” DeChambeau said. “It’d be a great representation of how golf should be played.”

One major issue with ready golf, Perez said, would be TV. If players are hitting whenever they’re ready, it might be tough to get cameras set up in time to capture shots.

Perez and Koepka could play a very quick two-ball.
On ShotLink, the amount of time it takes for players to hit each shot is recorded. Perez is very proud of his spot as the second-fastest player on tour.

The PGA Tour isn’t the only issue—college golf has a slow play problem, too.
“That s— was even slow for me,” DeChambeau said.

Though slow play is far from being solved, at least the conversation is happening, with constructive ideas about how to fix the issue being brought up by prominent players. And perhaps more important, DeChambeau has demonstrated the self-awareness to know what he’d be getting into if he ever tried to come at Koepka.