David Toms gets emotional after first win in three years 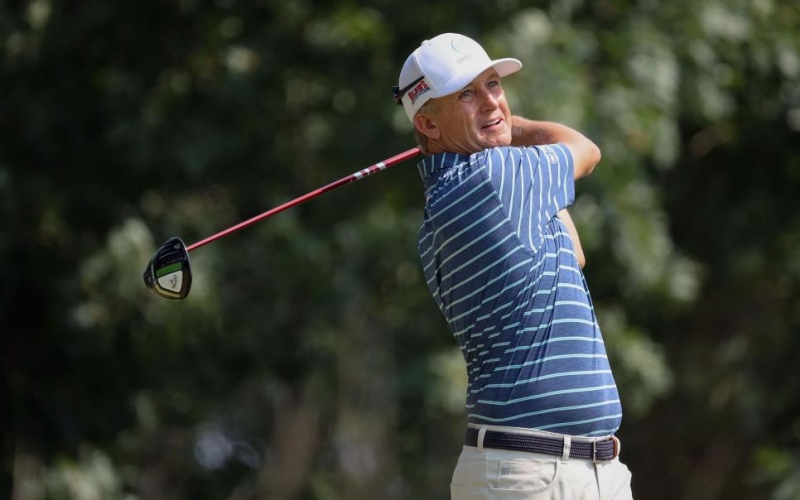 Dilip Vishwanat
David Toms hits a tee shot on the second hole during the final round of the Ascension Charity Classic.

By John Strege
A golf course with a pedigree that almost demands a quality winner received one in the PGA Tour Champions’ inaugural Ascension Charity Classic on Sunday, when a man with a PGA Championship and a U.S. Senior Open on his résumé prevailed.

David Toms, whose 13 PGA Tour victories include a PGA in 2001, defeated Dicky Pride on the first playoff hole at Norwood Hills Country Club in St. Louis, site of Ben Hogan’s 1948 PGA Championship victory, the second of his nine career majors.

It also was the site of the Greater St. Louis Golf Classic in 1972 and ’73, won by World Golf Hall of Famers Lee Trevino and Gene Littler. And to boot, another Hall of Famer, Kathy Whitworth, won three straight LPGA events there.

Toms shot a five-under-par 66 on Sunday to cap 10-under 203 total, a number that was matched when Pride made a 20-foot birdie putt on the 18th hole to send it to a playoff. Returning to the 18th, Toms won with a tap-in par, while Pride missed the green and left his 20-foot par putt an inch short.

“I still work hard. It’s tough,” an emotional Toms said in the wake of his first victory since winning the Senior Open in 2018. “Guys prepare every week. They play great. It means a lot, obviously. It means a lot. I felt good all week here. It felt like a PGA Tour event with the crowds and everything, the buildout.

“I was worried early in the week. The golf course was really soft and with the zoysia fairways it was playing crazy long. It just got faster and faster, and I started driving the ball really well. My speed was better today with the putter, too. I didn’t make everything, but I felt good over it, which is key for me.”

Toms emerged from a leader-board logjam with birdies at 12 and 13 to get to 10 under and a one-stroke lead that held up until Pride pulled even on the last hole of regulation. A PGA Tour Champions rookie at 52, Pride already has a victory on his record, at the Mitsubishi Electric Classic in May.

“It was a good week, but it was a bad playoff,” Pride said.

The good-week sentiment was widely shared. A course awash in history was rewarded with a strong winner as well as a remarkable performance from St. Louis native Jay Haas, who at 67 shot his age by holing a 15-foot birdie putt at 18.

“That’s a pretty cool way to finish off the week,” said Haas, who finished one shot out of the playoff in a tie for third with Woody Austin. “I’m pleased. It’s such an easy place to play. Airport’s right here, hotels, baseball games, fans are great. There’s so many positives here in St. Louis.. I told somebody I wish it was 15 years earlier when I was a little more in my prime, but I’ll be back next year. So hopefully this is a long-running event.”