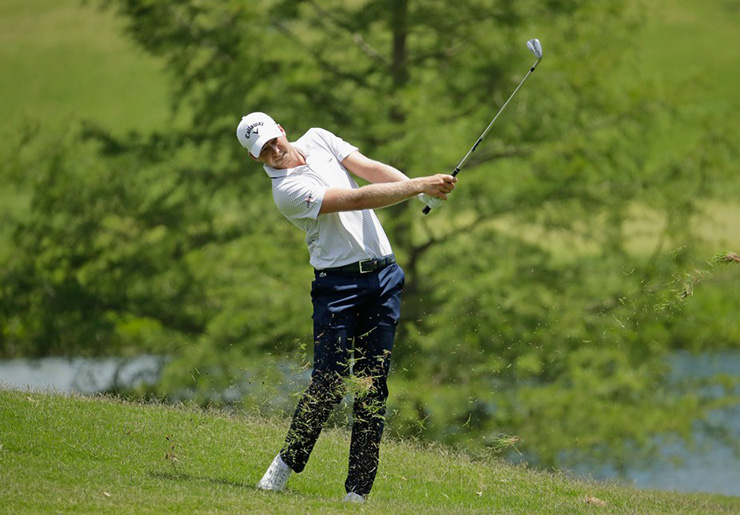 Daniel Berger plays his shot on the first hole during the final round of the FedEx St. Jude Classic. (Photo by Andy Lyons/Getty Images)

Daniel Berger, who grew up in South Florida not far from Nicklaus, has never been lacking in the mental side of the game, specifically when it comes to confidence. His father, Jay, is a former pro tennis player, and as a teenager Daniel worked the range at The Dye Preserve, where he was exposed to several pro golfers, including Steve Marino, whom he competed against (and sometimes beat) despite Marino being 13 years his senior.

Sunday, Berger got his second career win on the PGA Tour, successfully defending his title at the FedEx St. Jude Classic, where he closed with a pair of 66s on the weekend at TPC Southwind to win by one over Charl Schwartzel and Whee Kim.

Phil Mickelson, meanwhile, finished three strokes back. Tied for the lead on the back nine, Mickelson twice found trouble on the par-4 12th and went on to make triple.

Two years ago, it was Berger who was in contention for a win and found a hazard in the final round, rinsing his tee shot at the par-3 17th at the Honda Classic at PGA National in a playoff loss to Padraig Harrington.

“You’re wondering if you let that one go by,” Berger reflected, “will you ever be in this position again?”

A lot of players would have been scarred by the experience. Berger got his first win the following season, a little more than 12 months later, and beat, among others, Mickelson.

With numbers like that, and an inherent borderline cockiness to go with it, it’s no wonder Berger would give it right back to one of the biggest needlers in golf in Mickelson.

During a Sunday rain delay in Memphis in 2016, Mickelson sarcastically asked Berger if any rookie had been named Rookie of the Year without having won a tournament, something Berger managed to do in the 2014-’15 season.

Berger, meanwhile, has long referred to Mickelson by his full first name, Phillip.

“He says only his wife calls him that,” Berger recalled the 2016 conversation on Saturday. “I can’t call him that until I win on the PGA Tour. But I still call him that anyway. I don’t care. It is what it is.”

A day later, the two ran into each other in scoring after Berger closed out the victory with a four-birdie, no-bogey round.