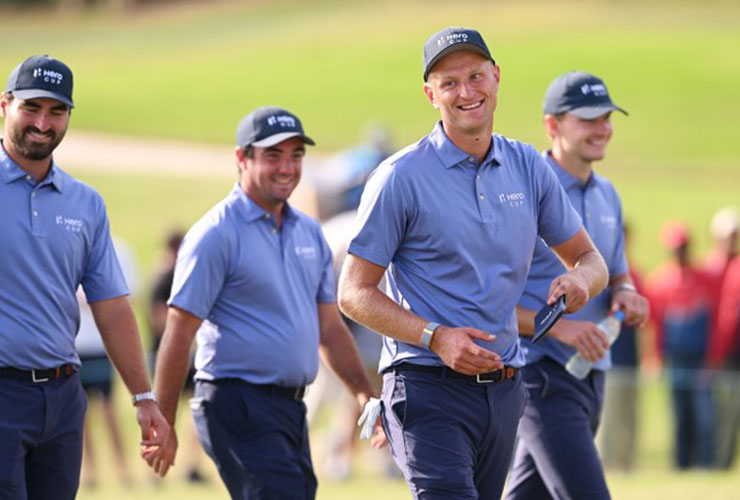 The momentum shifted throughout Sunday’s singles session at Abu Dhabi Golf Club, with GB&I’s decision to front-load in a bid to overturn their two-point deficit appearing to pay off as they made a strong start, before Continental Europe built up commanding leads in some of the later matches to turn the tide in their favour.

With 12.5 points already in the bank for Continental Europe, Poland’s Meronk sank his birdie putt from more than 30 feet on the 18th green to seal the deal.

Francesco Molinari’s team won six of the day’s 10 matches, with the other four going GB&I’s way.

The Italian said: “Amazing, amazing. I can finally relax — the last couple of hours have been tense after finishing my game.

“But yeah, it’s been great all week, super happy for the guys. Like I said all week, it’s been very, very easy leading them and being a captain for them.”

Molinari struck the first blow as he finished strongly to beat Shane Lowry 3&2 in a high-quality top match which could have gone either way.

It was then GB&I’s turn to put some points on the board as Tommy Fleetwood beat Thomas Pieters 3&2 and Tyrrell Hatton thumped Antoine Rozner 5&4.

But with Continental Europe boasting healthy advantages in many of the remaining matches, GB&I had a mountain to climb if they were to reach the 13 points required to secure the win.

Their hopes rested on the tight matches in the middle, with Séamus Power only one down against Nicolai Højgaard with two to play and Callum Shinkwin tied against Meronk in the closing stages of their contest.

Irishman Power had a chance to tie his match at the 17th but missed a seven-foot putt to guarantee the impressive Højgaard half a point and move Continental Europe one step closer to victory.

Matt Wallace closed out a 2&1 win against Thomas Detry to secure a third point for GB&I, but things then started to unravel as Sepp Straka eased past Ewen Ferguson, winning 5&4, and Højgaard beat Power 1-up to make the score 11.5-9.5 to Continental Europe.

Victor Perez inched his side closer to the title with a 4&2 win against Jordan Smith, holing a fantastic putt to clinch the victory.

Robert MacIntyre gave GB&I something to cheer as he enjoyed a comfortable 5&3 victory over Alex Noren but it was only a matter of time before Continental Europe got over the line, as Meronk headed to the 18th with a one-hole lead over Shinkwin.

And they did so in Match Six as Meronk produced fireworks on the last to win by one hole.

Guido Migliozzi then beat Richard Mansell 4&3 in the anchor match to finish things off.

Meronk was delighted with his contribution. He said: “I didn’t hole a lot of putts today so it was great to have this final putt on the last. With the team all around me, a special feeling.

“Winning as a team is just much more fun because you have these guys supporting you, playing with them and just being as a team — it’s just more fun and it’s more enjoyable for me, for sure.”