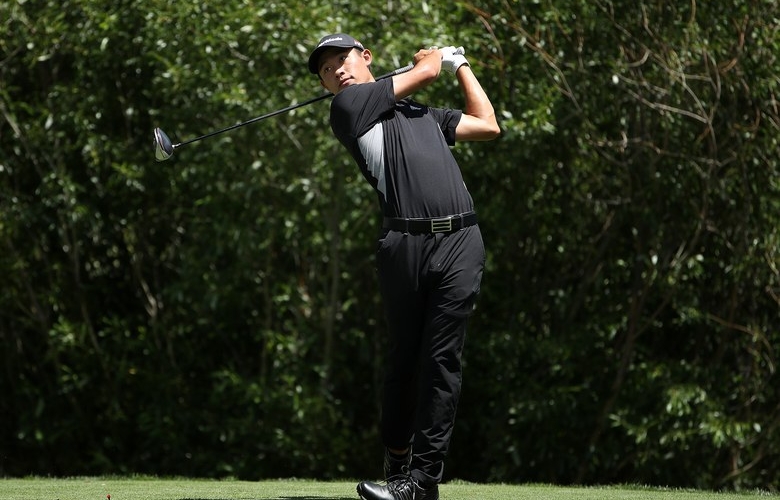 RENO, NEVADA – JULY 28: Collin Morikawa of the United States during the final round of the Barracuda Championship at Montreux Country Club on July 28, 2019 in Reno, Nevada. (Photo by Christian Petersen/Getty Images)


By John Strege
Impatience has become the hallmark of this iteration of the next generation in professional golf, represented by a trio of players determined to prove that the future already has arrived.

Collin Morikawa, 22, emphasised the point previously made by Matthew Wolff by birdieing the final three holes at Montreux Golf & Country Club in Reno to win the Barracuda Championship in only his sixth start as a professional.

Victory was still a few minutes away in this tournament that employs a modified Stableford scoring system and Troy Merritt had an eagle chip at 18 that had he made it would have won the tournament, but it slid past the hole.

“Speechless,” Morikawa said, explaining his reaction. “My heart was beating really fast. To be in that position is something I wanted to do all summer.”

“I think the gates are open,” he said.

Morikawa turned professional in June, at the conclusion of his college season at Cal-Berkeley, and made the cut in each of his six starts. He tied for second in the inaugural 3M Open, losing only when the 20-year-old Wolff holed an eagle putt from off the green to win in his third start as a professional. Morikawa followed with a tie for fourth in the John Deere Classic in his next start, then won in Reno.

Hovland, meanwhile, is the reigning U.S. Amateur champion who must wonder when his time will come. Only 21, Hovland tied for 12th in the U.S. Open, turned pro and has made the cut in each of his four PGA Tour starts and finished in the top 20 in the latter three of them.

Morikawa was hovering a few points off the lead for much of the day, then elevated his game over the final five holes. He birdied the 14th by making a seven-foot putt, birdied the par-3 16th with a 237-yard 6-iron to the front fringe, then holing a 10-foot putt. On the par-4 17th, he holed a 29-foot birdie putt that gave him the lead.

“When I hit it it was definitely firm, but I knew it was a good putt,” he said. “I knew when I hit it was dead centre. It felt good to make that putt, but obviously, it wasn’t over. I knew I had business to do on 18 and I hit three good shots and was able to tap in for a birdie.”

“I’ve been knocking on the door the past month or so and the game’s felt really good,” Morikawa said. “I think when I got to hole 13, the par-5, I kind of got out of my rhythm. I didn’t trust my shots, and I knew I was still in it. It took me a couple of holes, but once I got to 16 I hit a really good shot. Just believed in myself and was able to hit some good shots and come through.”

Coming through, that too is the hallmark of this, the next generation.