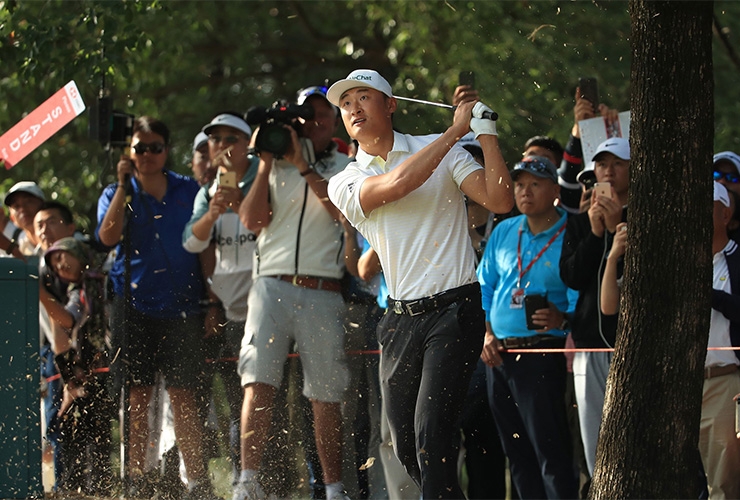 By Ryan Herrington
A week after Hideki Matsuyama contended at the Zozo Championship in his native Japan, Haotong Li has similar aspirations at the WGC-HSBC Champions in China. The 24-year-old jumped to the Day 1 lead on Thursday at Sheshan International Golf Club in Shanghai, shooting an eight-under 64 to pull one stroke ahead of France’s Victor Perez.

Li birdied three of his first five holes and made the turn after starting on the 10th tee at five under. A bogey on his 10th hole, the par-4 first at Sheshan, was followed by an eagle and birdie on his next two holes. An eight-foot par-saving putt on his final hole left him leading after a round for the first time on the PGA Tour.

The solid start was welcome for Li, who has struggled with his ball-striking in recent months. The five-time European Tour winner has missed the cut in four of his last seven tournaments dating back to July and seen in place in the World Rankings fall to 59th from 35th in April. After switching to a new set of irons this summer, Li said he returned to an old set earlier in the week.

Li has had success playing in his home country, winning five worldwide tournaments in China, including the European Tour’s Volvo China Open in 2016. In six previous starts at the WGC-HSBC, his best finishes were a T-7 in 2016 and a T-11 in 2018. His previous low round at Sheshan International was a 66.

“Obviously it would be great joy for Chinese golfers and Chinese golf fans to have a Chinese player winning a WGC-HSBC Champions here in China, but for the next three days, anything could happen,” Li said. “So I don’t want to think too much about it. I just want to focus and concentrate on the upcoming three days because anything can happen. I just wanted to do a good job to keep this momentum going.”

Defending champion Xander Schauffele is among a group of four that are two shots off the lead in a tie for third. His six-under 66 comes despite the fact he’s been fighting the flu and struggling just to keep his voice. Schauffele didn’t play a practice round, sitting out the pro-am on Wednesday.