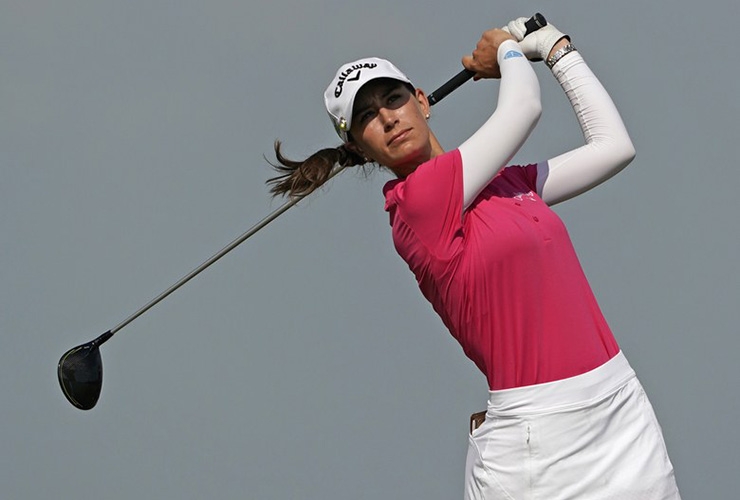 Chuck Burton/Getty Images
THE COLONY, TX – OCTOBER 06: Cheyenne Knight tees off on the second hole during the final round of the Volunteers of America Classic golf tournament at the Old American Golf Club on October 6, 2019 in The Colony, Texas.

By Keely Levins
Entering this week’s Volunteers of America Classic, LPGA rookie Cheyenne Knight knew she was in jeopardy of losing her tour card. The former University of Alabama All-American was 114th on the money list and needed a top-five finish in this, the final full-field tournament of the LPGA season, to get inside the top 100 and avoid a return to the LPGA Q-Series. That’s a big ask for any LPGA player, particularly a 22-year-old who had missed nine cuts in 2019 and whose best finish of the season was a T-29.

But Knight did the unlikely at Old American Golf Club in The Colony, Texas. With a closing 66, after earlier rounds of 66-67-67, Knight wound of the winner by two strokes over Jaye Marie Green and Brittany Altomare.

Though the final result sounds like a somewhat comfortable victory, Sunday’s play was closer than that would lead on. The leader board had been tight throughout the tournament, and the back nine in steamy Texas was no different. Knight, Altomare and Green separated themselves from the rest of the field, but weren’t able to separate themselves from one another until the final hole.

While Knight was on the 16th hole, Altomare, playing in the group ahead, birdied the 17th to take a share of the lead at 17 under. Knight made her par on 16, and on the short par-5 17th, matched Altomare with a birdie of her own to retake the outright lead. All the while, Green hovered two shots back.

Walking to the 18th tee, Knight’s concerns about keeping her card had been overtaken by thoughts of whether she could hold on for her maiden win. Finishing in the top five was as good as guaranteed; now she needed to focus on how to finish off the victory.

Knight hit the fairway and caught a break when Altomare up ahead made bogey, her approach going through the green and her notoriously hot putter failing to help her convert a must-have up and down. Once Knight hit the green with her approach (albeit more than 30 below the hole), and Green missed the putting surface, she could relax—slightly. A nice lag and quick two-footer later, the native of Aledo, Texas, was crying as friends sprayed her with champagne and her parents rushed on the green to hug her. Surprisingly, she had just become the first Alabama player to win an LPGA title.

“I’ve always dreamt of a putt to win an LPGA event. I said when I got my card that this was the event I was most looking forward to and who would have thought this helped me like secure my card,” said Knight, who’d played in this event, a little more than an hour from where she grew up, as an amateur in 2016. “It’s just been such a good learning experience because I thought I was planning on going back to Q-School and with this win, it just means everything knowing that I can persevere and knowing that I’m strong enough to do anything.”

Knight finished with a 33 on the back nine. That’s a number that holds great significance to her, as it was the one her late brother Brandon, wore as a high school football player. Brandon was killed in a car accident in 2008 when Cheyenne was 12, when his vehicle was struck by a drunk driver.

“I think I had a second caddie out there, and I know he’s watching in heaven, just so proud of me,” Knight said.