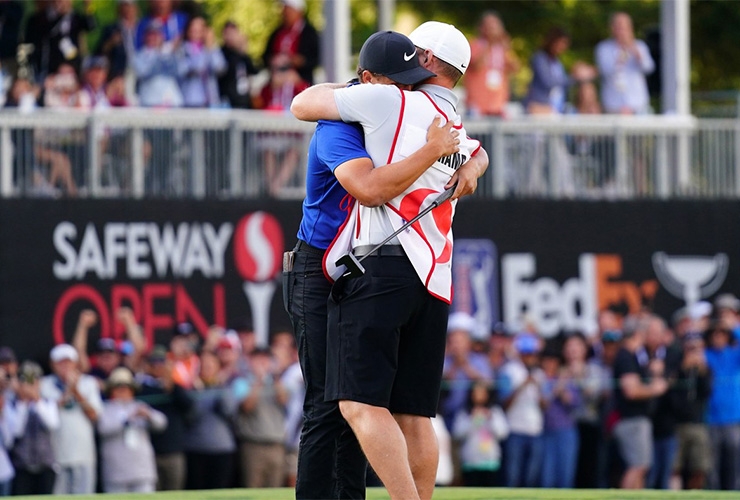 Cameron Champ plays with a stoicism that suggests an old soul observing the mandate to act like you’ve been there before. But even where he is inclined to spike the ball, on this day, in this place, was not the occasion.

Champ won the Safeway Open in Northern California wine country on Sunday. Hold the sparkling wine, however. But not the tears. He won with the heaviest of hearts and his mind frequently drifting to home, to Sacramento, 65 miles northeast.

His grandfather, Mack Champ, Papa, as Cameron calls him, “the greatest man alive,” is in hospice, battling Stage 4 stomach cancer. “I got a video of him sitting up and watching,” Cameron’s emotional father, Jeff, said.

Champ, 24, carried a three-stroke lead into the final round and victory appeared imminent for most of the day. Then Adam Hadwin closed with three straight birdies, forcing Champ to hole a four-footer for birdie at 18 to win at the Silverado Resort in Napa.

When the putt dropped, the final stroke in a three-under-par 69, Champ briefly raised both arms, and moments later tearfully embraced his father, who unabashedly wept, too.

“With everything going on with my family, with my grandpa, I wasn’t even sure if I was going to play,” Cameron said. “It was going to be a last-minute deal. We weren’t sure how we were going to hold up. He does good, enjoys the days, but sometimes he’ll mention he’s kind of done, he feels like he doesn’t want to fight anymore.” 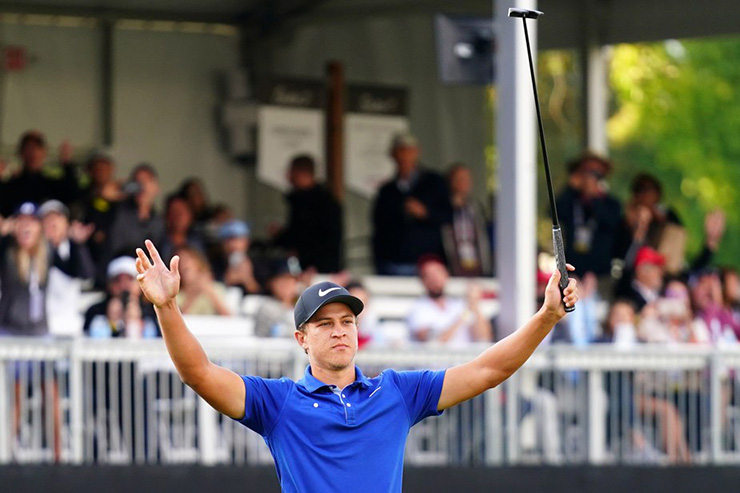 Yet he wanted Champ to play, and, well, “I don’t know if it was meant to be, but to win here, no matter if I win no more tournaments, 10 more tournaments or whatever it may be, this will be the greatest win of my golfing career, for sure.”

Mack introduced Cameron to the game as a 2-year-old swinging a plastic club in Papa’s backyard in the Sacramento suburb of North Highlands. In the ensuing years, the two of them were inseparable and often as note at Foothill Golf Center nearby.

“From age 2, I spent more time at Grandpa’s and Grandma’s house than I did my house, it felt like,” Cameron said. “I remember when I was younger, my parents worked, and Grandpa and Grandma would pick me up, I’d go hang out there all day, jack it around the backyard. We could hit it over the house and it would fall directly into the backyard, so we just hit them back and forth, Wiffle balls. I think it just started from that.”

Papa was a decent player himself, though with a homemade swing, “a caddie swing,” Jeff called it, but the lessons he imparted on Cameron probably had more to do with life than golf. Cameron has a tattoo, “Proverbs 3:6,” his grandparents’ favourite verse: “In all your ways submit to him, and he will make your paths straight.”

“He’s someone I want to be one day, someone I strive to be,” Champ said. “He’s been a huge influence. To be so loving and passionate about others than himself and loving the game of golf and then teaching his grandson, giving me the chance as a kid to love the game and to be able to be sitting here with y’all.”

Mack often told Champ that “it’s not where you’re from, it’s where you’re going.” Maybe he knew something. Cameron’s destiny seems to be stardom. He has won twice in his first 33 PGA Tour starts, one of only 21 players in history with two victories in a similar span at the outset of their careers. 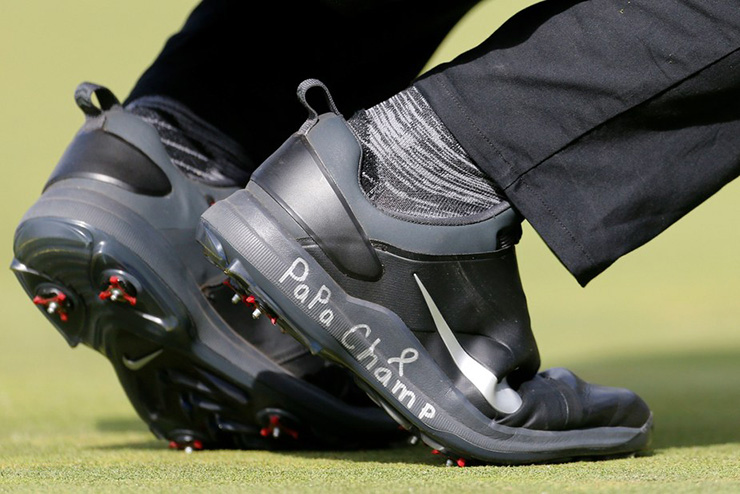 Champ wrote an inscription for his grandfather, Mack, on his shoes at the Safeway Open (Jonathan Ferrey)

Cameron is a home-run hitter who arrived right on cue, as the game had transitioned to one of power. It paid off at a critical time on Sunday, with Hadwin having tied for the lead. Champ had bogeyed 17, shortly before Hadwin birdied 18.

Champ hit his drive on the par-5 18th hole 369 yards down the middle, leaving him an 8-iron, albeit a long one, 198 yards to the hole. He was unfazed that he hit it only 188 yards and was left with a 43-foot pitch to a green sloping away from him. He hit it to four feet and calmly holed the putt.

“I knew on 18 that if I can put a good drive in the fairway, it would give me a good chance,” he said. “I’d have a pretty easy birdie if I can just hit the green. Obviously I hit it just short and got up and down.”

Champ, incidentally, had written “Papa Champ” on his shoes and his golf glove. A year before, on Instagram, he called Papa “the man I look up to for his wisdom and positivity no matter what goes on in my life on and off the course. Your strength and sacrifice gave me the opportunity to play the game I love and I can never thank you enough.”

Maybe not, but on an emotional day that in fact was meant to be, Cameron, thanked him plenty.