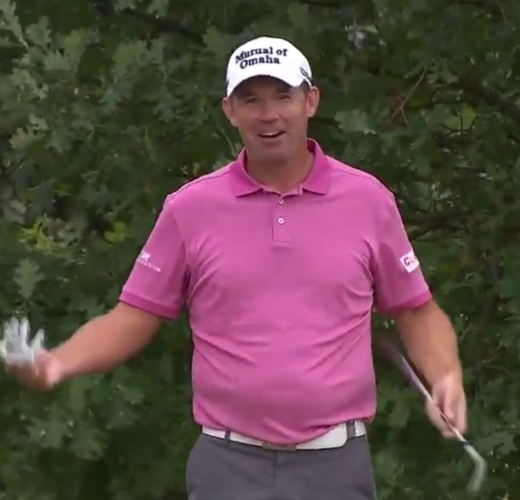 By Christopher Powers
During Saturday’s third round of the European Tour’s D+D Real Czech Masters, Padraig Harrington really had to go. It’s a situation we’ve all faced on the golf course before, when there is no bathroom in sight and you can’t hold it in any longer. Depending on the layout of wherever you’re playing, it can be tough to find some privacy. For Harrington, he also had to deal with a pesky cameraman at Albatross Golf Resort.

Following a run of four birdies in five holes, Harrington noticed a few trees off the 11th fairway, a perfect spot to relieve himself. So he bolted over as if there was a sale on wacky golf contraptions that could be purchased for three easy payments of $9.99. As he made his way there, he turned around and noticed a cameraman following his every move, leading to this hilarious staredown:

“Go away!” is right. Let the man take a leak in peace!

While it would seem like a creepy move to try and film someone going to the bathroom, you’ve got to hand it to the European Tour broadcast, which always delivers. Whether their broadcasters are dropping F-bombs live on air or their cameramen are jingling change to piss off Patrick Reed or attempting to catch guys peeing, the Euro Tour continues to be the best broadcast in golf. Harrington went on to finish in solo second thanks to weekend rounds of 65 and 69, by far his best result worldwide this season.