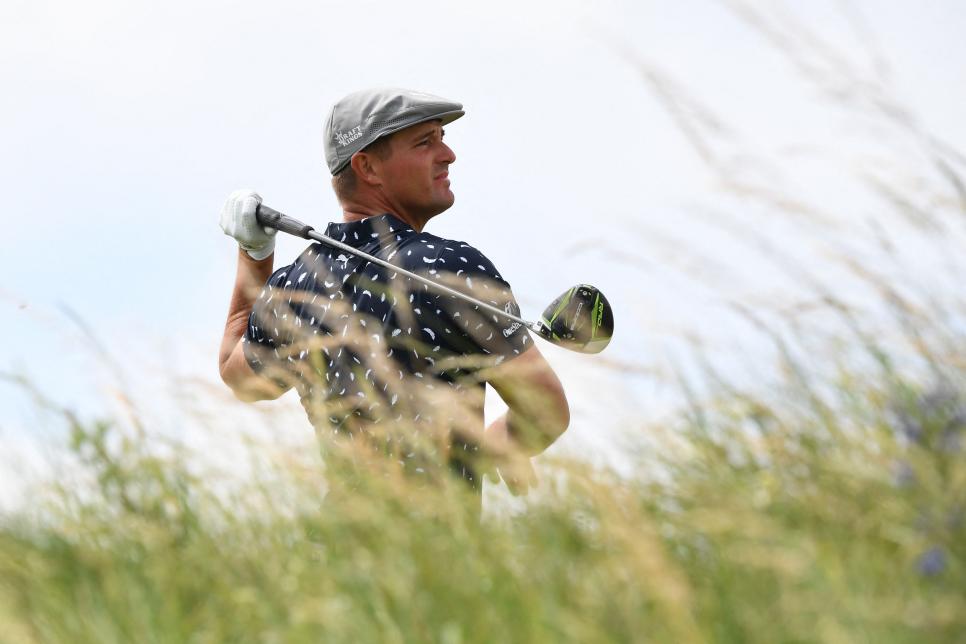 By Christopher Powers
Bryson DeChambeau is a notorious complicator of matters, most often after a poor round. It’s never just “I played bad,” but rather, the equation was off, there were too many variables he was not adequately prepared for, his quadratus lumborum wasn’t working, etc., etc.

But after a one-over 71 in which he hit just four of 14 fairways, DeChambeau took a page out of the book of his good buddy Brooks Koepka, summing up the day in a short but sweet manner.

“I said it yesterday or a couple days ago. If I can hit it down the middle of the fairway, that’s great,” he said. “But with the driver right now, the driver sucks.”

The driver sucks. Rarely, if ever, does DeChambeau go the facts-only route, which was extremely refreshing to hear after watching him attempt his “hit-it/find-it/ hack-it-out” strategy at Royal St George’s. He simply said what we all saw and what we we’re all thinking—the driver sucks.

That’s not to say DeChambeau can’t turn it around or his strategy can’t work in this event. Like he said, if he straightens the driver out, there is no reason he can’t put up a low one on Friday and thrust himself back into the mix. As Louis Oosthuizen’s opening-round 64 proved, there are plenty of birdies to be had. DeChambeau has also overcome bad first-round performances in majors plenty of times before, like when he shot a five-under 67 following a Thursday 76 at the 2021 Masters, or when he bounced back with a Friday 69 after a first-round 73 at Torrey Pines last month.

For that to happen, though, the driver needs to stop sucking, which he, of course, expanded on as only he can.

“It’s not a good face for me and we’re still trying to figure out how to make it good on the mis-hits. I’m living on the razor’s edge, like I’ve told people for a long time. When I did get it outside of the fairway, like in the first cut and what not, I catch jumpers out of there and I couldn’t control my wedges.

“It’s literally the physics and the way that they build heads now. It’s not the right design, unfortunately, and we’ve been trying to fix it, just haven’t had the results yet.”

UPDATE: 2:30 p.m. ET — Cobra tour operations manager Ben Schomin, who caddied for DeChambeau at the Rocket Mortgage Classic, responded to DeChambeau’s complaint in an interview with Golfweek. “Everybody is bending over backwards. We’ve got multiple guys in R&D who are CAD’ing (computer-aided design) this and CAD-ing that, trying to get this and that into the pipeline faster. (Bryson) knows it,” Schomin said. “It’s just really, really painful when he says something that stupid.”

Schomin also said, “It’s like an 8-year-old that gets mad at you. They might fly off the handle and say, ‘I hate you.’ But then you go. ‘Whoa, no you don’t.’ We know as adults that they really don’t mean that and I know that if I got him cornered right now and said, ‘What the hell did you say that for,’ he would say that he was mad. He didn’t really mean to say it that harshly. He knows how much everyone bends over backwards for him, but it’s still not cool.”

UPDATE: 6:15 p.m. ET — DeChambeau took to social media later on Friday to apologise for his comments.