Brooks Koepka not in the field at the WGC-HSBC Champions, status of his knee injury remains unclear 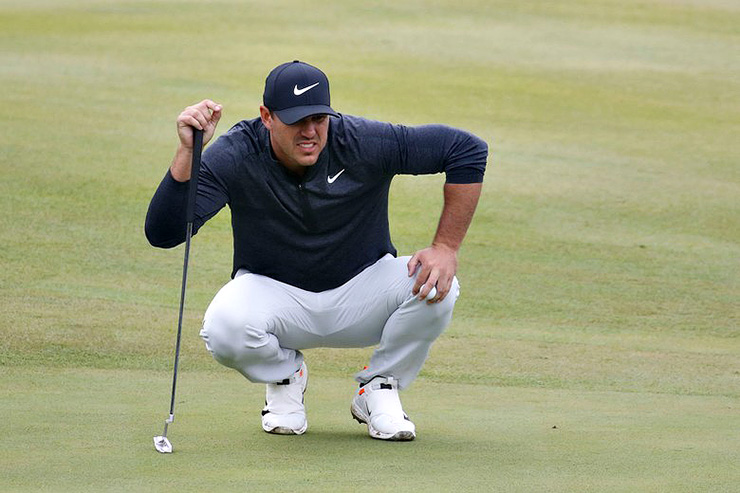 Brooks Koepka during the second round of the 2019 CJ Cup @ Nine Bridges. After the round, he withdrew from the tournament saying that he aggravated his left knee slipping on wet concrete. (NurPhoto)

By Ryan Herrington
It’s unclear the extent of Brooks Koepka’s knee injury, but it’s severe enough to keep him out of another PGA Tour event he originally had planned to play. The No. 1 ranked golfer in the world was not listed among those who will be competing at the WGC-HSBC Champions in China next week when the initial field was released on Friday.

Granted, it was a longshot that Koepka would make another flight back to Asia for the tournament after aggravating his left knee while slipping on wet concrete during the CJ Cup @ Nine Bridges two weeks ago in South Korea. Doctors advised Koepka to return to the United States for further testing, so he withdrew from the CJ Cup after the second round and flew home to Florida. At that time, he also announced that he would miss this week’s Zozo Championship but left the WGC-HSBC up in the air.

Koepka underwent stem-cell treatment in August to repair a partially torn patella tendon in the left knee after finishing tied for third at the Tour Championship. He returned to compete in the Shriners Hospitals for Children Open, missing the cut after rounds of 70-71, and said prior to the CJ Cup, where he was the defending champion, that the knee felt good, although more stem-cell treatment might be in the offing.

Suffice to say, Koepka’s status moving forward is a curiosity among many people not just part of the four-time major winner’s inner circle. None more so, perhaps, then U.S. Presidents Cup team captain Tiger Woods. Koepka was an automatic qualifier for the American team that will compete in December at Royal Melbourne. When asked prior to the Zozo Championship about Koepka, Woods said he’d been in contact with him and was hopeful that he’d be able to return in time to compete in Australia.

“We’re just waiting to see what the surgeons say and see what his protocols will be going forward. That’s something he’ll keep me abreast of going forward,” Woods said. “He’s getting other opinions about where his knee is and what his options are. I went through the same thing with my knee and my back. You want as many opinions as you can before you decide which road you want to go down.”

Earlier in the week, Koepka’s management team told multiple media outlets it had no more information about the injury.

Suffice it to say, Woods knows from bad knees after coming off surgery on his own left knee in August as well. Given that there are still more than six weeks until the competition, Woods sounded content to wait to see what might happen with time.

“There’s no hurry, you are part of the team,” Woods said he told Koepka. “Now you have to figure out what’s best for your career and your knee. If you decide you can play, great. If you can’t, I totally understand and we’ll cross that bridge when it comes.”

Forecasting the outcome of golf tournaments is a foolish endeavour, which is why "this is Bryson DeChambeau's week" claims were met with plenty of scepticism.