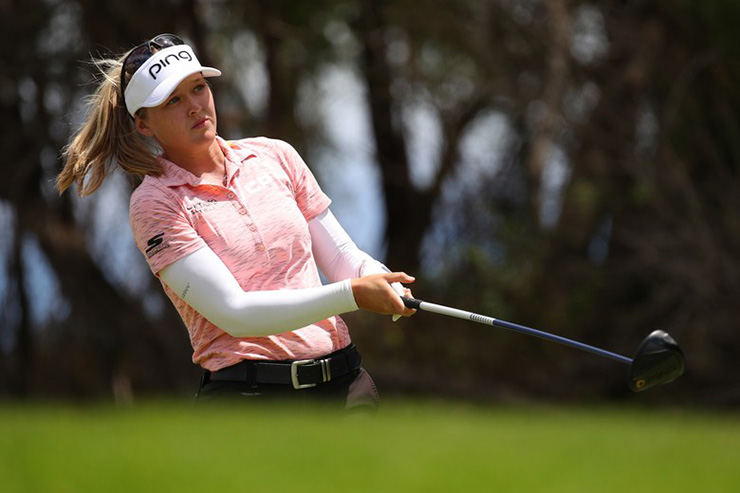 KAPOLEI, HAWAII – APRIL 21: Brooke Henderson of Canada watches her drive on the fifth hole during the final round of the LOTTE Championship at Ko Olina Golf Club on April 21, 2019, in Kapolei, Hawaii. (Photo by Gregory Shamus/Getty Images)

By Keely Levins
On a windy Sunday in Oahu, Brooke Henderson’s steady round of 70 was plenty to secure the trophy at the LOTTE Championship. A pack of players were close to Henderson at the start of the day, including Nelly Korda, who was tied with Henderson at 14-under. But the difficult conditions kept Korda and other notable players over par (two of whom where former World No. 1 Ariya Jutanugarn and four-time LPGA winner Minjee Lee). Henderson’s two-under 70 left her finishing the tournament at 16-under, winning by four over Eun-Hee Ji.

The win was a milestone in a few ways for Henderson. She defended her title, having won this event in 2018. Winning at Ko Olina Golf Club this year marks her first win of the season and the eighth of her career. The number is significant in that it ties her with Sandra Post, Mike Weir and George Knudson as the Canadians with the most LPGA or PGA Tour victories. Henderson hits this benchmark before turning 22.

“It’s really amazing to even be mentioned in the same sentence as Mike Weir, George, and Sandra,” said Henderson. “This week was really special. I always love coming to Hawaii. Last year was such an incredible week for me, to be able to hoist that trophy for the first time…To get the win, eighth career win on the LPGA Tour, is just surreal and really amazing.”

Henderson is known for her length off the tee — thanks to her long, John Daly-esque takeaway — and her driving was solid throughout the tournament. But it was her second-shot stat that helped her cruise to victory with all of those pars. On Sunday, she missed only three greens.

At the end of the event, after the trophy ceremony, the winner of the LOTTE Championship gets a very public hula lesson from a group of pros. Henderson and her caddie, sister Brittany, were new to hula last year. As for this year, Henderson warned everyone before the dance that she hadn’t practised since being introduced to it last year, and that her hula dancing could still use a bit of work. The way her golf game is peaking right now, it’s easy to forgive her hula abilities.