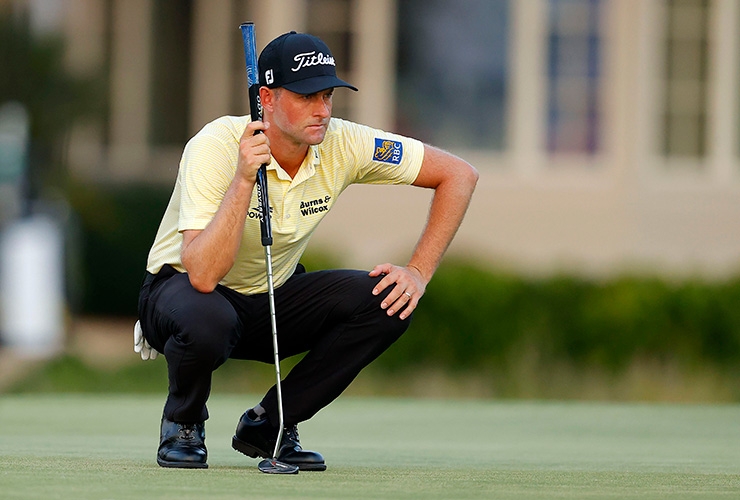 By Shane Ryan
HILTON HEAD ISLAND — From a distance, you could just make out the muted yellow of Webb Simpson’s shirt as he prepared to tee off on the 18th hole Sunday. Beyond that faded bit of colour, he was little more than a silhouette against Calibogue Sound. He’d looked even smaller a moment before, when he buried a putt on the 17th green that could have been a few inches, for all I knew, but was in fact just shy of 18 feet. The growing darkness could be blamed for the flattened perspective, partly, but mostly it was me. I had gambled wrong, and was overlooking the 16th green where Abraham Ancer had just failed to make a birdie putt that, as it turned out, he couldn’t afford to miss. I shifted my gaze Sound-ward, and watched as Simpson raised his putter to acknowledge a small smattering of applause. Birdie or par?

One beat, two beats, three beats. The scoreboard flashed -22 next to Simpson’s name. A two-shot lead. Time to leave Ancer behind.

On a leader board packed as tightly as the one we saw this Father’s Day, where at one point before an unexpected and mightily annoying rain delay 37 players were within three shots of the lead, every swing of momentum can seem monumental. There are surges and counter-surges and breakaways and fade-outs, and all of them take on a critical magnitude for roughly 30 seconds, and then cease to matter forever. I joined Tyrrell Hatton and Ancer in the final group on the 10th hole, and immediately lost all perspective. A thunder delay had halted play for almost three hours, and now dusk was looming, lending the scene at Harbour Town Golf Links an ultra-gothic air (and with the eerie Spanish moss hanging everywhere, it was already pretty gothic), which might have further skewed the sense of proportion and reality.

RELATED: 5 takeaways from the final round at Harbour Town

At that point, it looked like an improbable two-horse race might be developing. Ancer and Hatton, both at 19 under, led their closest challengers by a shot, and their approaches on the 10th green displayed a style clash that seemed appropriate for an imminent duel. Ancer hit a low screamer, slicing through the unbearably thick air, while Hatton’s rose and rose and seemed to hover, almost gloating, over the massive live oak over which it had soared. Both balls stopped about 15 feet from the hole. Both men missed their birdies.

Thank God for the electronic leader boards. There’s no gallery, but the leader boards are still there for the players, and without them there would be no sense of where anyone stood. At the same time, the names are like ghosts, floating forward and backward, immaterial but real nonetheless. The miracle of live televised golf is that it confers omniscience on the viewer—you see everything, at all times, more or less. On the course, without video, the names and numbers are only suggestions. By the 12th hole, you could read the data—Koepka in at 18 under, Simpson, Joaquin Niemann, and Michael Thompson on the course at the same score, Ian Poulter and Daniel Berger at 17 under with enough holes left to do damage—but if you wanted to know how they got there, or where they were going, you had to invent that story yourself. It almost gives the invisible players more power; they’re not quite human, and therefore capable of anything.

A tight approach on that 12th green gave Hatton a nine-foot birdie putt, and he made it to become the first player to break the 20-under threshold. On the next tee, a woman on the balcony of a home across the street, unaware of the golf tournament, yelled “Marty!” and then exploded in peals of laughter, as though the search for Marty was the most delightful escapade of her life. It bothered Hatton, who hit his tee shot into a bunker, took an ill-advised risk and hit his second shot straight into the leaves of a live oak, then nearly rescued himself with a brilliant pitch from the hard ground. Hatton squatted above the bulkheads on the edge of the green in an attempt to divine the terrain’s secrets, but failed to make his par putt. A fall from paradise. Back to 19 under.

On another scoreboard, the ghost called Webb Simpson had moved to 19 under. Niemann to 19 under. Thompson out of the mix.

Ancer and Hatton kept making pars, and the idea of a mano-a-mano finish grew less realistic. This was not a static course, and the players below them would not remain politely in the distance. 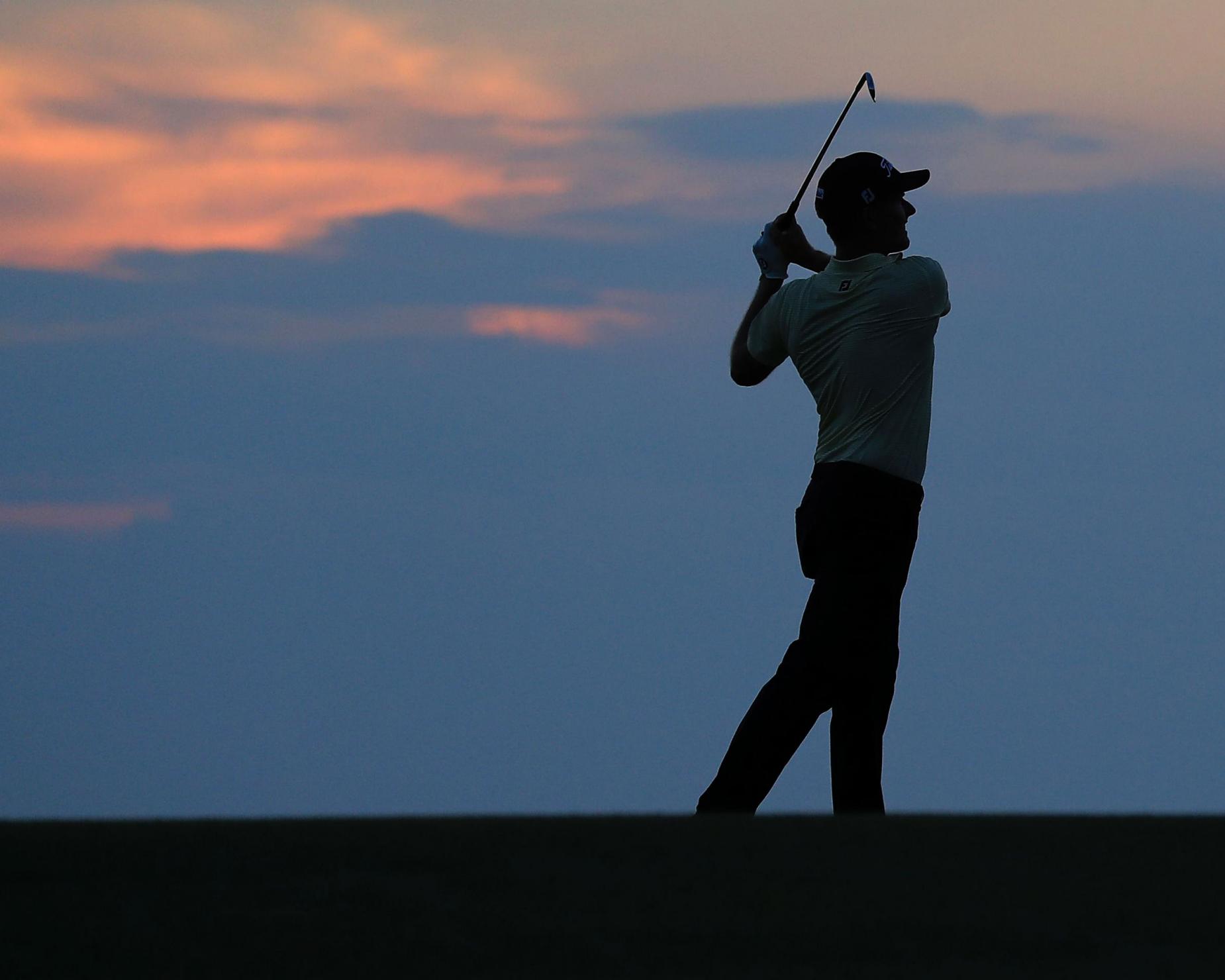 Sam Greenwood
Webb Simpson plays his second shot on the 18th hole during the final round of the 2020 RBC Heritage.

The lone par 5 on the back nine, the 15th, remained, and I ran ahead to catch a glimpse of Simpson.

Garcia and Berger to 18 under. Niemann—my God—to 20 under.

Simpson reached the 15th in two, and when his struggling partner, Ryan Palmer, managed to hit his approach beneath a flower pot, it was clear we’d be there for a while. As an entire fleet of birds squawked in collective desperation, and the first fingers of darkness came through the trees, I took stock. At the start of the day, I’d guessed that 21 under would be the winning score, but imposing a finish line like that is deceptive; it’s not real, and the individual players, all of them under great pressure, have to actually get there.

A simple two-putt for Simpson, and he joined Niemann at 20 under. He walked away, back into ghost form, and Ancer came behind him and made a birdie to join him at the mythical number. Now, with three of them there, there was no going back. Brian Gay, 72-hole record holder with a 20-under 264 total of his own en route to a win in 2009, was about to be erased from history.

The sun was a great orange ball now, but a few heroic trees blocked it out from Hatton and Ancer as they took their approaches on 16, facing east into the Sound. It didn’t help Ancer; Hatton birdied to join the group at 20 under, but the leader board said that Simpson had reached 21 under. A 15-footer on 16, it turned out, and now as I looked toward the water, I watched him raise that putter and bury what would turn out to be the winning 18-footer on 17. Three birdies in a row, and the cluster was broken.

It shouldn’t have been a surprise. All Simpson had done all week, from Thursday’s start to Sunday’s close, was drop every kind of putt the course could put in front of him. 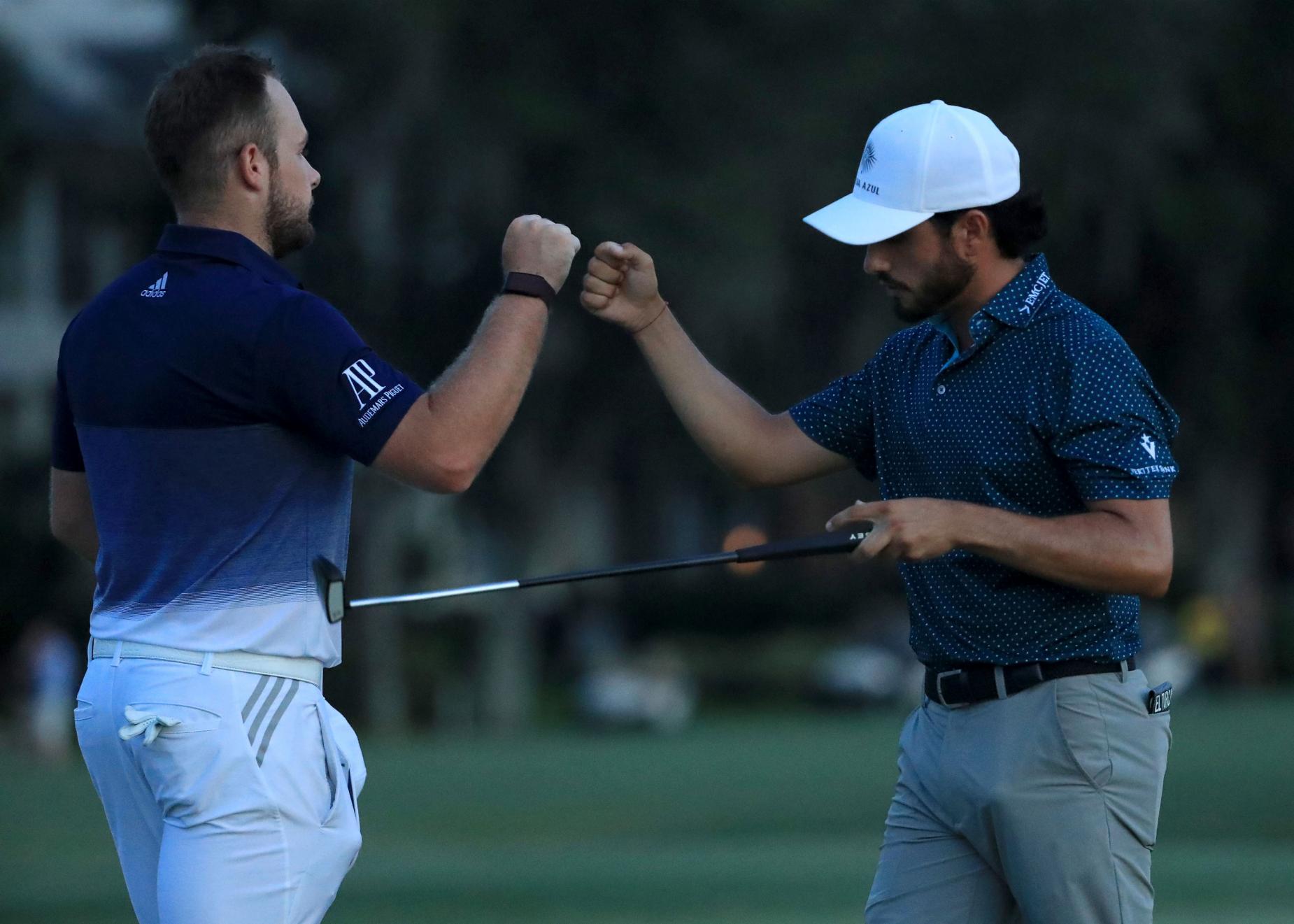 Streeter Lecka
Tyrrell Hatton and Abraham Ancer bump fists after finishing on the 18th green during the final round of the RBC Heritage.

The CBS cameras showed where Simpson’s drive on 18 landed, safely in the fairway, and rising in the distance as we moved toward the green, the ships’ masts, the TV tower and eventually, because we were under the oaks on the right side, the lighthouse. He played it safe, an easy two-putt par as the official 8:33 p.m. sunset time came and went, and though Ancer made birdie on 17, he couldn’t do it again to force the playoff.

In the remote press conference, wearing his new red tartan blazer, Simpson, 34 and now a seven-time PGA Tour winner, reflected on the endless surges and endless swings. He affirmed that he was aware of the leader board ghosts, and that the odd scenario altered the tactics of his endgame, if only subtly.

“It’s both staying in your own lane, worrying about yourself, but also you’ve got to know what’s going on,” said the father of five, who had won on Father’s Day eight years ago in claiming the U.S. Open at Olympic Club. “I think, had I not looked at the leader boards, I would have thought 20 was enough, but I’m looking there on 12, I looked at the leader boards, and then the next leader board, maybe we have one on 13, but I was just amazed tons of guys were shooting low scores and making birdies. So that made me … not change a whole lot, but just attack a little bit more and make sure that all my putts were getting to the hole. I left a couple putts short on the front, but I made sure I didn’t do that on the last seven holes.”

There’s no way for a golfer to plan when he makes his allotment of birdies, but there is such a thing as a sense of the moment. Simpson broke away, when nobody else could, because he knew that Harbour Town in the summer, without the wind, couldn’t contain anyone for very long. On a day that in a pre-COVID-19 universe would have been the final round of the U.S. Open at Winged Foot, this was decidedly not a U.S. Open Sunday. There was no such thing as coasting to victory, pressure or no pressure. The surges would come to the very end, boldness would win, and Simpson was good enough and smart enough to ride the final wave.