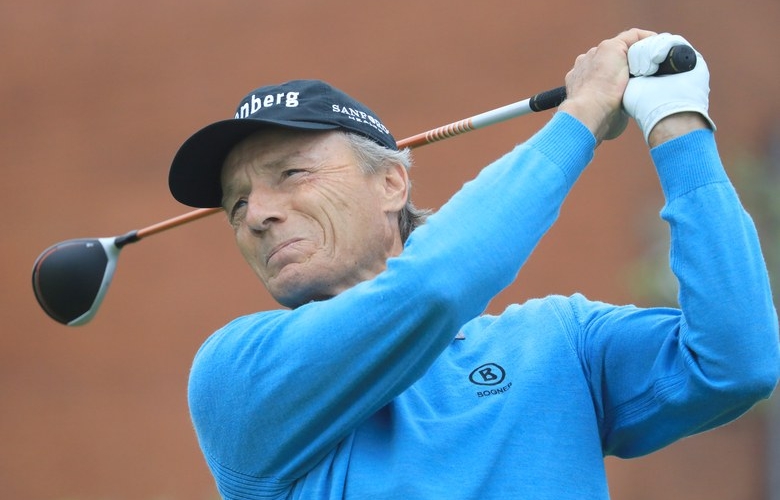 Langer in action during the final round of the Senior Open presented by Rolex played at Royal Lytham & St. Annes on July 28, 2019 in Lytham St Annes, England. (Photo by Phil Inglis/Getty Images)

By John Strege
The end for Bernhard Langer has to be out there somewhere, but where? Who can tell? Langer stubbornly will not allow it to get close enough that it can be definitively identified.

So it was on Sunday, a month shy of his 62nd birthday, that he again quelled any notion that his better days are numbered by winning the Senior British Open for a record fourth time.

On a cold, rainy day at Royal Lytham & St. Annes, Langer erased a three-stroke deficit with a front-nine of four-under-par 30, shot a four-under-par 66 and won by two over Paul Broadhurst.

“I love holding this trophy,” Langer said. “It’s a beautiful one. I never got to hold the Open Championship trophy, but this is the next best thing and I’m very blessed to have won four of these now.”

Early in the week, Langer spoke of having been hindered recently by mental mistakes, which could have been construed as an unwelcome concession to age. His three previous starts—ties for 30th, 24th and 34th—also suggested the years finally were beginning to take a toll.

“I just need to avoid these silly mistakes,” he had said. “I make one or two silly mistakes a day, and you can’t do that, and that costs you four, six, eight shots a tournament. So I’ve got to be going back to being rock-solid where you just don’t make those mistakes and get the lowest score possible.”

He was successful in doing so on an exceedingly difficult day for golf on England’s west coast. His only errors were in execution, a few errant shots that led to two back-nine bogeys.

“I did eliminate them, yeah,” he said of the mental miscues. “It wasn’t mental today. It was just a couple of bad swings. My mind was working 100 percent. I didn’t make any mental error all day long.”

At the outset of the round, Langer trailed Broadhurst by three, but a bogey-free front nine allowed him to make the turn leading him by one and Woody Austin and Doug Barron by two. A birdie at 13 put him up three and he holed a 50-foot birdie putt on 14 to increase his lead to four.

“I was trying to have a good attitude, which is not easy when you see the forecast,” Langer said.

But even on a miserable day, if it’s the Senior British Open, the sun tends to shine on him. In his 12 starts in the championship, Langer has finished in the top two in half of them and in the top four in eight. Only once has his finished outside the top 10 and that was a tie for 12th.

The victory was his second of the year, extending his streak to eight straight years with multiple senior wins. It was his 11th senior major championship, and the 40th win of his senior career.

Clearly, the end, as it relates to his productivity, remains elusive and not yet visible even on the horizon.

Eds Note: After a brilliant second round 69 to make the cut on the number, Dubai-based amateur Steven Kelbrick produced weekend rounds of 78-74 to finish T-76 of the 79 players to make the cut.