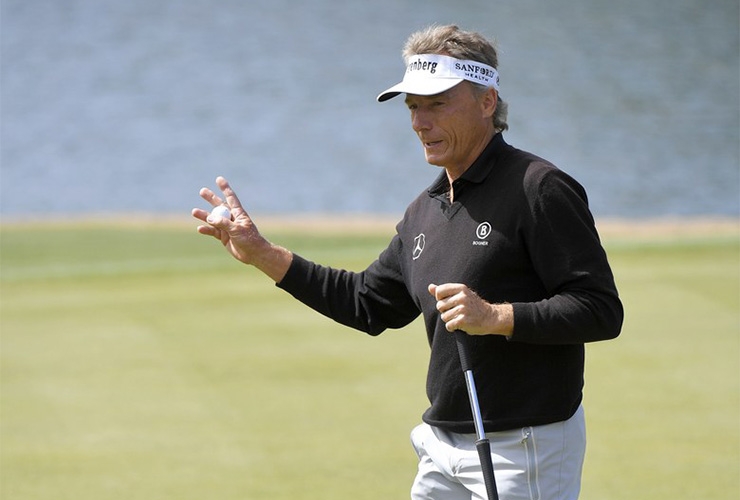 TUCSON, AZ – MARCH 01: Bernhard Langeracknowledges the gallery on the third green during the final round of the PGA TOUR Champions Cologuard Classic at Omni Tucson National on March 1, 2020 in Tucson, Arizona. (Photo by Stan Badz/PGA TOUR via Getty Images )

By John Strege
No one is ageless, of course, but at what point it is evident in golf is a moving target, and Bernhard Langer continues to move the target more than most.

Langer, 62, won the Cologuard Classic at Omni Tucson National in Tucson, Ariz., on Sunday. He started the final round trailing by four, then shot a seven-under par 66 to win by two over Woody Austin.

It marks the 14th consecutive season the World Golf Hall of Famer has won on the PGA Tour Champions, and a record that only a few years ago seemed unapproachable suddenly is in play.

The victory was Langer’s 41st on the senior tour, second only to Hale Irwin’s 45 career victories. And there is no indication that this victory will prove to be an aberration. In four starts this year, Langer has finished tied for sixth, tied for fifth, tied for third and first.

First, but not his last.

Langer hit every fairway, 14 of 14, in an eight birdie, one bogey round that included a chip-in birdie at the seventh hole and an 18th-hole bogey. The German native completed 54 holes in 18-under par 201. Austin had the second-best round of the day, a seven-under 66. Thirty-six hole leader Brett Quigley, pursuing a second victory in this his rookie year on the PGA Tour Champions, stumbled to an even-par 73 and tied Rod Pampling for third.

Langer ranked it among his finest rounds as a senior. “It was very much up there, certainly the first 17½ holes,” he said. “That six-iron at the last wasn’t a lot of quality, but up until then a lot of quality shots. Really good driving all day long, and good putting. All in all, extremely happy.

“I still feel if I can play my best I have a chance to win out here, but I have to play my best I can’t play at 80 per cent. Too many good players out here.”

As for Irwin’s record, four wins to tie still represent, at age 62, an uphill climb for Langer, but he is not unaware of it. “I don’t really think about it,” he said, “but I get reminded of it just about every week out here.”