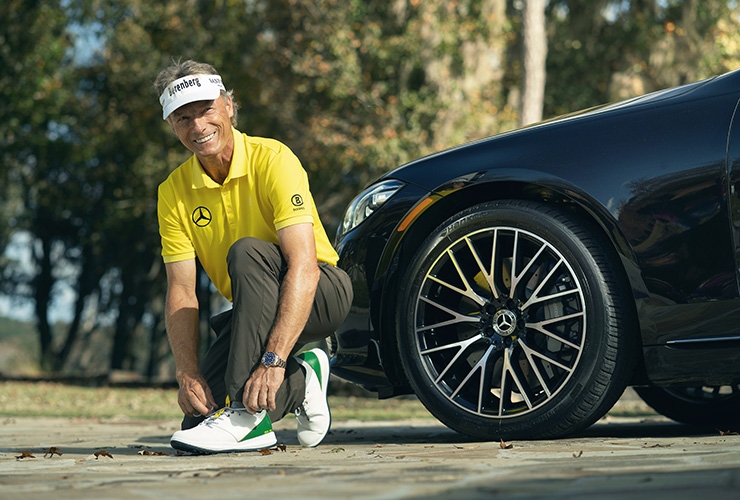 By Robin Barwick
Bernhard Langer has a special perspective as he prepares to play in the Masters for the 37th time this week. Not only is he the oldest golfer in the field at Augusta National, the German star is also the only player this whose personal history in the tournament reaches back to 1982.

“It is a two-sided coin. On one side I can’t believe I am now the oldest player but on the other side I am very grateful that I am still competing at this age, which not many people can do.

“I was sitting next to Larry Mize a couple years ago at the Past Champions Dinner. We were saying that 20 or 30 years ago we were two of the youngest guys at the dinner, looking up to the older guys, and that it won’t be long before we are the old guys, with the young guys maybe looking up to us. Maybe we have arrived at that point already.”

Langer earned his Masters debut as the winner of the European Tour’s 1981 Order of Merit, and aged 24 at the 1982 Masters he was the first German golfer to tee up in the storied tournament.

“It was great to finally play at Augusta and to compete against all those huge names we constantly heard about: Jack Nicklaus, Arnold Palmer, Lee Trevino, Gary Player, all these names we looked up to. There were times when Europeans were too much in awe of them. Once I played against them more often I realised I could be as good as any of them on any given week.”

Langer missed the cut in 1982, having never played on greens as fast or as undulating as the famous putting surfaces at Augusta, yet just three years later he slipped his arms into the winner’s Green Jacket for the first time.

“I learned my lesson the first time around in 1982,” recalls Langer, “when I three-putted 11 times in 36 holes to miss the cut by one. I was enjoying a great year in 1985 and I felt like I belonged here, like I was one of the best players in the world and that I should have a chance of winning the Masters. I spent a lot of time studying the course and in 1985 I think I only three-putted once over 72 holes.”

Langer has not lost the knack of scoring low. He shot 64 on Sunday, in the final round of a PGA Tour Champions event in Phoenix, to finish in a tie for fifth, so brings confidence to Augusta, Georgia.

“I almost shot my age,” says Langer. “I came just one short again. I feel my game is in good shape. I have had days recently when I have putted quite well and then other days when I have missed the odd putt and I wish I wouldn’t miss any of those four or five footers. Even one or two of those misses are too many. But my game is close. At Augusta, I need to focus on my iron game and on my putting from 10 feet and in.

The next appointment for Langer, after this conversation, is at Augusta National Golf Club – for the first time since the 2019 Masters – to begin his tournament preparations in earnest, and that means making the slow drive up Magnolia Lane on Masters Monday.

“It is always a special feeling no matter what day of the week – or what time of the year – to drive up Magnolia Lane,” says Langer. “Not just that but I am driving a wonderful Mercedes-Benz. I always drive myself to the golf course and to drive up Magnolia Lane in a Mercedes-Benz feels like you have made it and you are on top of the world. It is always the start of an exciting day ahead.”

Bernhard Langer on the Champions Dinner: ‘Tiger gave a speech that was very emotional’