Australian amateur Jack Trent, a UNLV junior, had a week to remember in his PGA Tour debut 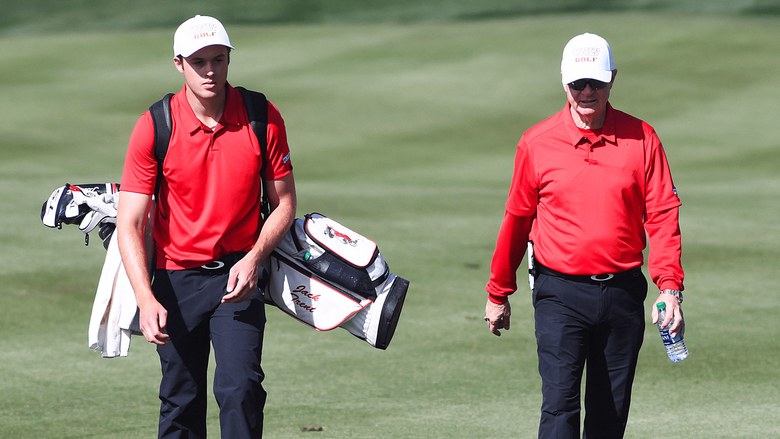 By John Strege
A week that began on a note so high suggested that the days to follow would be something of a letdown for Australian amateur Jack Trent. Instead, his week only got better.

Trent, 20 and a junior at the University of Nevada Las Vegas, threatened to finish in the top 10 in the Shriners Hospitals for Children Open at the TPC Summerlin in Las Vegas, his first PGA Tour event.

“I mean, you wish for it,” he said, “but it’s not something I’m trying to go for. Definitely exceeded my expectations. My goal at the start of the week was have a successful week, be four really solid rounds. I think I did a little more than solid, so I’m really happy right now.”

Trent closed with a three-under-par 68 on Sunday, a round that concluded with his making a double bogey, his worst hole of the week. He was tied for 11th when he arrived at the 18th hole and when he putted out for 6, he fell to a tie for 26th at the time and ultimately tied for 29th.

Still, he completed 72 holes on golf’s strongest tour in 14-under 270 and was among the tournament leaders in strokes gained/putting.

“I guess it just shows that if I play my game and keep my head down I can not only make the cut, but make a lot of birdies and play with some really good players,” he said.

Trent, who is from Brisbane, Australia, was given an exemption into the tournament by virtue of his victory in the prestigious Southern Highlands Collegiate in March. He had defeated Texas star Cole Hammer in a playoff. He was 202nd in the World Amateur Golf Ranking before the Shriners.

His week began with his playing a practice round with fellow Aussie Adam Scott, among his role models growing up and a man who played college golf at UNLV.

“The first time I met him I was 10 years old,” Trent said on Sunday. “I was about half his size, asking for his autograph. Now I’m hitting shots with him.

“That was a special moment. I think I was more nervous on the first tee with him than at the tournament. Really super guy, really chill, relaxed, easy to talk to. Beautiful swing as well. He made it really easy and comfortable for me starting off the week.”

Scott recalled his own experiences in his youth, playing with those he had admired from afar.

“Getting to play a practice round with someone you’ve looked up to is a great experience,” Scott said. “I tried not to get in his way too much. I don’t know his game and I don’t know him that well, so I was just observing a lot.

“He’s a big, strong kid, like every kid who comes on tour seems to be. Hits it a long way. Soon as you get a really good understanding of your own game like that you can really compete at the tour level quite quickly, as we’ve seen with some the kids out of college last year.

“So if he’s in this tournament, he’s doing a lot of right stuff. He just has to stick at it.”

It helped that Trent was playing a course with which he was intimately familiar. He moved to Las Vegas after his sophomore year in high school, attended Palo Verde High and had a membership at the TPC Summerlin for a year-and-a-half.

“It’s kind of like my new home town after I moved here from Australia,” he said. “A lot of familiar faces, a lot of members from the club, family and friends. It means so much to me. To put up a good performance for them makes it all worthwhile.”