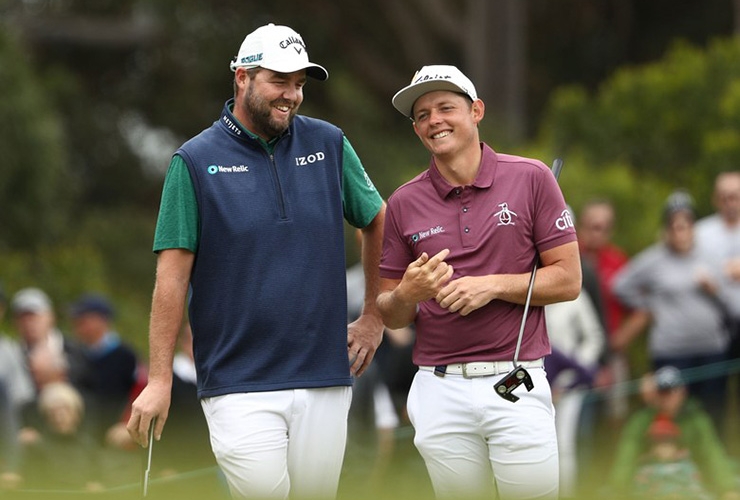 Marc Leishman and Cameron Smith of Australia talk during Day 4 of the 2018 World Cup of Golf, played at The Metropolitan in Melbourne. (Robert Cianflone/Getty Images)

By Brian Wacker
The sun was shining while the palm trees swayed in a steady breeze as a small squall blew through Waialae Country Club on Tuesday afternoon. Five thousand miles away, Australia could have used the rain as the country continued to burn.

Since the wildfires Down Under began in Queensland and New South Wales last September—fueled by a long, intense drought—nearly 20 million acres have been scorched, according to multiple reports. At least 25 people have died, more than a half-billion animals have perished and scores of residents have been forced to flee their homes.

Among them was Cameron Smith’s uncle, who fled Tumbarumba, a small town about 300 miles southeast of Sydney, to Smith’s home in Florida a few days ago after losing his house, tractors, horses, “just everything, really,” according to Smith.

The ongoing tragedy, of course, is personal for Smith and many of the Australians on the PGA Tour. It’s why the 26-year-old is pledging $500 a birdie and $1,000 per eagle this week at the Sony Open. Countryman Marc Leishman is doing the same, and his Begin Again Foundation will match every donation made up to $5,000.

“Everything is so dry it’s hard to see it getting better,” Leishman said.

Their donations are a start.

Golf is a sport with deep pockets and can have a significant impact, which is why the Presidents Cup, run by the PGA Tour and held last month at Royal Melbourne, will kick in as well. Tour officials have committed to match whatever donations players make at this week’s Sony Open, up to $125,000. Smith and Leishman were both members of the International team at Royal Melbourne.

“It’s just devastating for the families,” said Leishman, who figures he has about 15 family members still in the country, all safe—for the moment, anyway. “Firefighters and people risking their lives to save homes and other people’s lives, animals as well. … You feel kind of helpless.”

In the wake of Hurricane Dorian, which devastated the Bahamas last September, a number of players and powerful figures in the game came together to raise millions for that island nation. It will likely take years for parts of the Bahamas to return to normal. That money makes a difference.

In Australia, the fires aren’t expected to stop anytime soon; it’s only the beginning of the fire season there. Flames have hit every state in Australia, but New South Wales and Victoria—home to Sydney and Melbourne—are in the worst shape.

While Sydney and Melbourne are currently safe from the fires, coastal areas between the two cities have been hit hard, particularly in the south. Victoria is under a state of disaster and New South Wales a state of emergency.

Which is why help continues to pour in from all directions.

Golf can and should continue to get on board, too.

LPGA stars Jessica and Nelly Korda, whose father Petr won the 1998 Australian Open in tennis, have promised $150 for each birdie and $300 for every eagle they make during the LPGA’s two opening events of the 2020 season in Florida. Others will likely follow suit, too. Some already have.

Other Aussies in the field at Waialae this week—Matt Jones, Cameron Davis, Cameron Percy and Rhein Gibson—have offered to make donations as well.

“It’s an uphill battle,” Leishman said of the disaster.

Every little bit of aid helps.

“So much is lost, you don’t know what to do,” Smith said. “I’m just trying to help in every way. It’s not that much, but if everyone helps in a small way it can turn into a big help.”