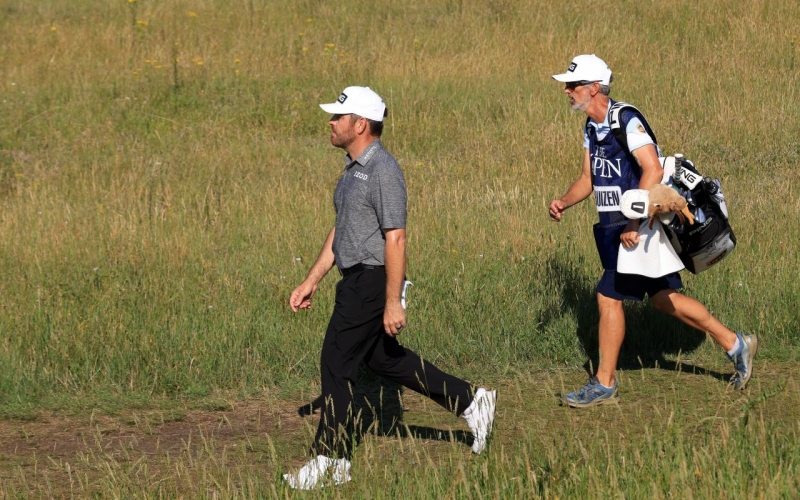 Chris Trotman
A T-3 finish was Oosthuizen’s 10th top-10 finish in a major since his win at the 2010 Open, leading to more questions he doesn’t enjoy answering.

By John Huggan
SANDWICH, England—The signs were there early and kept on coming. The final round of the 149th Open Championship was never destined to end with Louis Oosthuizen as “the champion golfer of the year.” Ahead by one shot standing on the first tee, the 38-year old South African lapsed into the sort of soporific mood that has too often characterized his play on Sunday in major championships. This eventual tie for third place alongside U.S. Open champion Jon Rahm was Oosthuizen’s 10th top-10 finish—and his eighth in the top-three—since he made off with the claret jug at St. Andrews 11 years ago.

It is a record that would surely provoke pride in the vast majority of players, even amidst the inevitable disappointments. But the signs were there earlier in the week that the farmer boy from Mussell Bay near Cape Town was growing tired of the “Why haven’t you won a second major?” narrative. His naturally quiet charm never quite ebbed away, but there were hints of mild irritation if you looked closely. There was a little bit of eye-rolling and one or two whispered sighs before he responded to questions.

So it was that, after shaking the hand of Collin Morikawa on the 18th green and signing the card that showed his closing one-over par 71 was at least four-shots too many, Oosthuizen beat a hasty retreat from Royal St. George’s without uttering one more word publicly. There was only, maybe 90 minutes later, a brief message on Twitter:

Well I do know one thing, the fans at @TheOpen are second (or third) to none. Thank you for the incredible support this week, and congrats to @collin_morikawa who played with class and grit today. Well done mate 👏🏼 #TheOpen pic.twitter.com/BZdhY8xFG8

It was just the sort of message one would expect from such a classy competitor, one blessed with maybe the most admired full swing in professional golf. Although that unofficial title now has some competition from the new Open champion.

Anyway, Oosthuizen’s overnight advantage lasted only until the fourth, where the first of his three bogeys drop him into a tie with Morikawa on 11-under par. Another lapse at the par-5 7th, where he ‘thinned’ his third shot from one greenside bunker into another en route to a bogey six, saw the 2010 Open champion lose the lead for good. By the turn he was four shots behind and destined to finish that way despite birdies at the short 11th and the long 14th.

Clearly, there wasn’t much about this round that could possibly console a man who has now come close without winning in three consecutive major championships. But Morikawa gave it his best shot with some kind words for the man with whom he had shared the last two rounds.

“These are the first few times I played with Louis,” said the now two-time major champion. “He is an outright amazing player and person. I hope I get more pairings with him because he’s just a great guy to play with. It’s nice to see another guy just stripe it down the middle. I mean, when I watch him play and hit his drives, I’m like, ‘Wow,’ I want to hit it like that.

“Yeah, Louis is consistent, he really is. He’s going to keep knocking at these doors, and I’m sure he’s going to knock a few more down. He’s just too good. He just had an unlucky break on seven. We were in the middle of the fairway and he makes bogey, and just had a couple other bogeys. Louis is a great guy, an amazing person, and I was very lucky to have the pairing with him the final two days.”

Oosthuizen’s feelings on that subject—and others—are for another day. Stay tuned, though. As Morikawa said, he’s too good for this latest disappointment to be the end of him as far as majors are concerned.