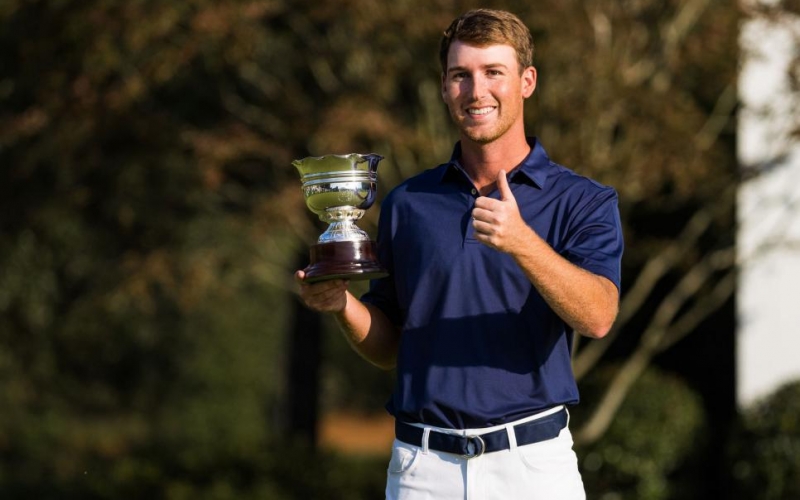 Ben Walton
Andy Ogletree holds up the low amateur trophy after finishing T-34 on Sunday at the Masters.

By Ryan Herrington
Andy Ogletree announced on Thursday that he is turning professional, five days removed from earning low amateur honours at the Masters after finishing T-34, the same place as U.S. Open champion Bryson DeChambeau. Where Ogletree will make his official debut is unknown, the 2019 U.S. Amateur champion noting during Masters week that he’ll be seeking sponsor’s exemptions into PGA Tour and Korn Ferry Tour events at the start of 2021.

“My amateur golf career was an absolute blast and last week at the Masters is the perfect way for it to end,” Ogletree said on Thursday. “I’ve had so much fun, met so many great people and have so many incredible memories, but it’s time for me to test my game at the next level, against the best of the best.”

To turn professional in golf requires no formal paperwork; you simply declare yourself a pro. Perhaps just in case, however, Ogletree did offer this handwritten declaration on social media.

I’ve been looking forward to this moment my whole life. Happy to say that I am officially a professional golfer ✅ pic.twitter.com/cKfRvD4yOH

Suffice it to say, being a pro golfer is something Ogletree has dreamed about for a while now, all the way back to this paper he wrote for elementary school in February 2008 … when he was just 9 years old growing up in Union, Miss., population 1,988.

The students at Union High School were allowed to take their phones to class last week to watch Ogletree playing his first two rounds at Augusta National. The younger kids reportedly got to watch TV in class, too.

Ogletree ends his amateur career with an impressive list of accomplishments. In addition to winning the Havemeyer Trophy at Pinehurst in August 2019, Ogletree played on the victorious 2019 U.S. Walker Cup team at Royal Liverpool. He was an All-American his last two seasons at Georgia Tech and was recently No. 4 on the World Amateur Golf Ranking. He’s expected to play Titleist equipment and wear Peter Millar apparel

“The game has taken me to so many special places already,” Ogletree said. “I cannot wait to see where it will take me in the future.”