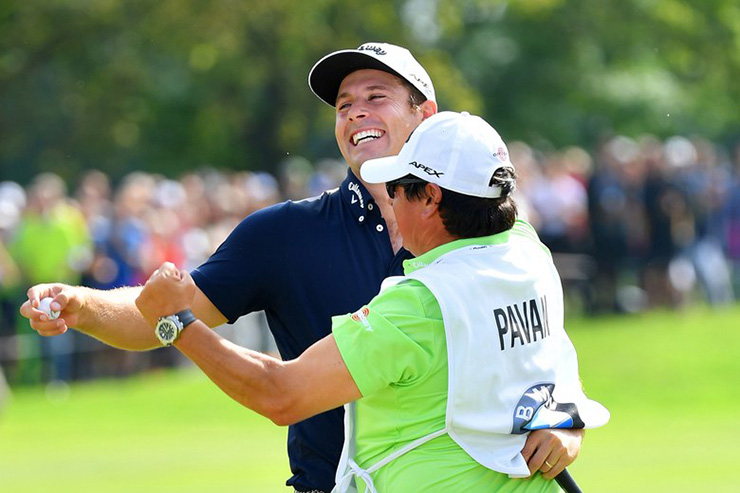 Andrea Pavan celebrates with his caddie on the 18th green after his victory during a playoff at the 2019 BMW International Open. (Stuart Franklin/Getty Images)

By John Huggan
The closing hole on the Golfclub Munchen Eichenreid course is a 568-yard par 5 that doglegs sharply right-to-left around a water hazard. As such it is not a hole that suits Andrea Pavan. Not up to hitting driver, the 30-year-old Italian used his trusty 3-wood from that 18th tee six times during the BMW International Open and not once was able to reach the distant green in two shots.

All of which now matters not at all. With an unlikely birdie on his “bogey hole,” the former Texas A&M golfer (he was a member of the 2009 NCAA winning team) beat Matt Fitzpatrick on the second hole of their sudden-death playoff to claim his second European Tour title.

It came down to this: After hitting his tee shot way right into rough, Pavan half-smothered his next shot into the long grass on the other side of the fairway. The lie was better than expected though, and from there Pavan struck a wedge to less than three feet. When Fitzpatrick was unable to get up-and-down from sand short of the putting surface, it was all over.

Still, while Pavan ultimately relied more than a little on the misfortunes of others, his earlier play was a lot more distinguished. Starting four strokes off the pace, the eventual champion shot his lowest round of the season, a bogey-free six-under-par 66.

“This is amazing to be honest,” said Pavan, who arrived in Germany ranked 133rd in the world but left 32nd on the Race to Dubai. “I was playing very well coming into this week. And I thought I had a chance starting the day. I got off to a good start [three birdies in the first six holes], but hit a few bad drives, my Achilles heel. I’m happy I have a strong 3-wood and 2-iron. That 18th hole is not the best for me, without driver. But I somehow managed to make birdie.

“I was feeling rushed when I got to my third shot in the playoff. I was out of position. But I got a decent lie. And it came out great. I’m glad it finished so close. Winning is so hard.”

Indeed, even as Pavan walked off the 18th green having finished on 15 under par, victory appeared to be in the hands of Fitzpatrick. Standing on the 16th tee, the former Ryder Cup player needed to play the last three holes in one under par to notch up his sixth European Tour title. With a drivable par 4 and a reachable par 5 to go, the young Englishman appeared to be in good shape.

It wasn’t to be, however. Having driven through the 16th green, Fitzpatrick needed three to get down, missing from five feet after a weak chip. A bogey, his only dropped shot of the day, followed at the short 17th, where he found sand off the tee, before a birdie on the last, courtesy of a brilliant 3-wood into the middle of the green, salvaged a spot in the playoff.

Others could have joined that party too, most notably Fitzpatrick’s playing partner, Matt Wallace. But that notion disappeared as the World No. 24—and the Race to Dubai leade —twice found water on the 18th en route to a bogey 6 that dropped him into a cosmopolitan seven-way tie for third place alongside South African Christian Bezuidenhout, Rafa Cabrera-Bello and Alvaro Quiros of Spain, Italian Edoardo Molinari, Matthias Schwab of Austria and Jordan Smith from England.