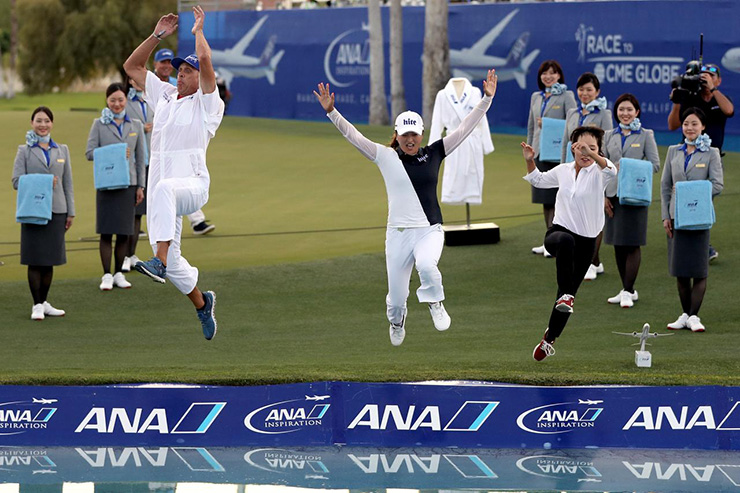 RANCHO MIRAGE, CALIFORNIA – APRIL 07: Jin Young Ko of Korea, her caddie David Brooker, and her agent Soo jin Choi, leap into Poppie\’s Pond next to the 18th green after her win during of the ANA Inspiration on the Dinah Shore course at Mission Hills Country Club on April 07, 2019 in Rancho Mirage, California. Photo by Matthew Stockman/Getty Images)

By Keely Levins
The ANA Inspiration has become the latest major championship to announce that it will be held without fans in 2020. The LPGA announced the disappointing yet unsurprising news Friday after working with event sponsors and local California officials to make the decision.

The event, originally slated to be played in March, was moved to Sept. 10-14 following the tour’s halt in competition in February due to the spreading of COVID-19.

“We appreciate the friendship of our partners at ANA, who continue to support the LPGA Tour through these unprecedented times,” said Mike Whan, LPGA Tour Commissioner, in a statement. “The champion’s walk at 18 and the jump into Poppie’s Pond are two of the greatest traditions on the LPGA Tour. While we wish we could have fans with us in person to celebrate these exciting moments, ensuring the health and safety of everyone inside and outside the ropes is of the utmost importance.”

Held each year in Rancho Mirage, Calif., the ANA Inspiration is usually the first major of the year. Due to schedule changes, it is the second major of 2020, but the first major the LPGA Tour will play in the United States. The AIG Women’s British Open will be the first LPGA Tour major of 2020, held Aug. 20-23 in Scotland. In July, the R&A announced fans will not be in attendance at Royal Troon for the AIG Women’s British Open.

There have yet to be fans allowed at any PGA Tour, LPGA or European Tour events since each of the circuits restarted competition.