After surprising day off, Woods ready for singles clash with Abraham Ancer 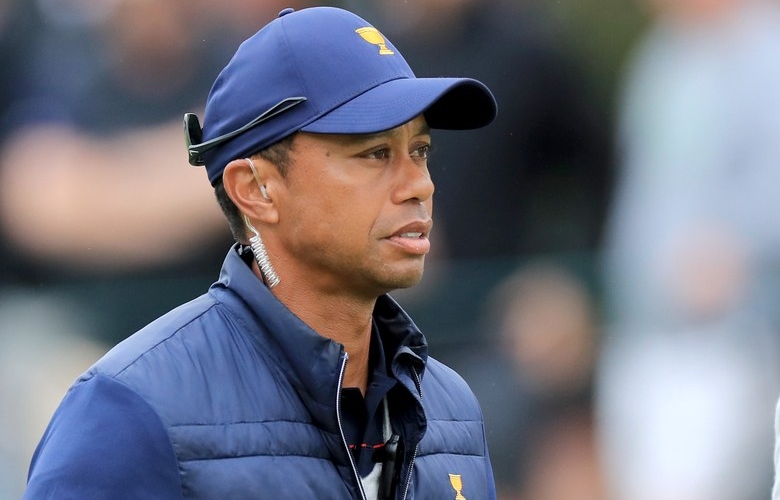 Tiger Woods the United States Team Captain on the course during the afternoon four-ball matches in the 2019 Presidents Cup at Royal Melbourne Golf Club on December 14, 2019, in Melbourne, Australia. (Photo by David Cannon/Getty Images)

By Daniel Rapaport
MELBOURNE, Australia — Every team-play captain confronts difficult choices. Who will play with whom? In what order? And who sits?

In that sense, Tiger Woods’s experience this week has been no different from the umpteen captains before him. On Saturday, though, Woods made a decision unlike any other in Presidents Cup history.

He sat his team’s best player in back-to-back matches. Himself.

“I tried to talk myself out of it,” Woods said. “But, you know, it is what it is. We’re going to go out there and try and get some points today and be ready for tomorrow.”

Woods was masterful in the first two rounds here, winning both his matches alongside Justin Thomas. Royal Melbourne’s unforgiving terrain separates the proper ball strikers from the pretenders. Woods relished the challenge, carving high draws when the holes asked for it and punching low fades when he had to. He made six birdies in 15 holes on Thursday en route to a 4-and-3 victory in four-ball, and he carried Thomas—until the last putt of the day, which Thomas sunk—to a dramatic 18th-hole triumph in foursomes.

Few expected Woods to play all five sessions here, given his nearly 44-year-old body, his injury history and the obligations that come with a captaincy. But his fantastic play led to some belief he’d abandon that plan and call his number whenever possible. That was never realistic, so it wasn’t a total surprise when Woods sat himself for the Saturday morning four-ball.

“That was kind of the game plan,” Woods said Friday evening. “It would be hard for me to go all the sessions.”

Not all the sessions, but surely four of the five? The general consensus was this: Woods would buzz around in his cart in the morning, help set the alternate-shot pairings, then reunite with Thomas for the afternoon session. That seemed all but certain after his team fall behind 9-5, meaning it would need a strong showing in foursomes to have any chance at all come Sunday singles time.

It didn’t happen. When Woods announced that Thomas would again play with Rickie Fowler, it was clear that he was going to rest himself yet again.

“You have to do what’s best for the team,” he said. “I’m getting ready for singles tomorrow.”

By sticking with his initial plan, Woods sent a clear message to his guys: I believe in you, and I’m not panicking despite an unexpected deficit.

“I trust my teammates. These guys are all playing well. It’s hard to sit four guys. That’s the thing when you have 12 great players. It’s hard to figure out who sits. It’s not an easy job.”

They rewarded his trust with a momentum-shifting afternoon, even though it could have been even better. The U.S. took the afternoon session, 3-1, to cut the Internationals’ lead to 10-8 despite Thomas and Fowler squandering a 5-up lead with eight holes to play, including losing the last three for a disappointing halve.

“At one point [on Friday], it looked like we were going to be down 1-9,” Woods said. “And for the International team only to get one point from that point on, for us to fight back and get eight points was a huge, huge win for us today. We’re looking forward to getting into singles tomorrow.”

Next up for Woods is a singles clash with breakout star Abraham Ancer in the first of 12 matches. Ancer has gone 3-0-1 here in his first Presidents Cup appearance and, with Marc Leishman, came back to steal that half-point from Thomas and Fowler in Saturday foursomes. The 28-year-old Mexican said at last month’s Mayakoba Classic that he would “like to play Tiger” in singles.

Woods is 6-2 in singles matches in his Presidents Cup career, and a victory Sunday would move him past Phil Mickelson for the most all-time wins in this competition with 26.

Whether Woods can continue his sparkling play after a 40-plus-hour layover remains uncertain. But here’s what we do know: He will most certainly be well-rested.