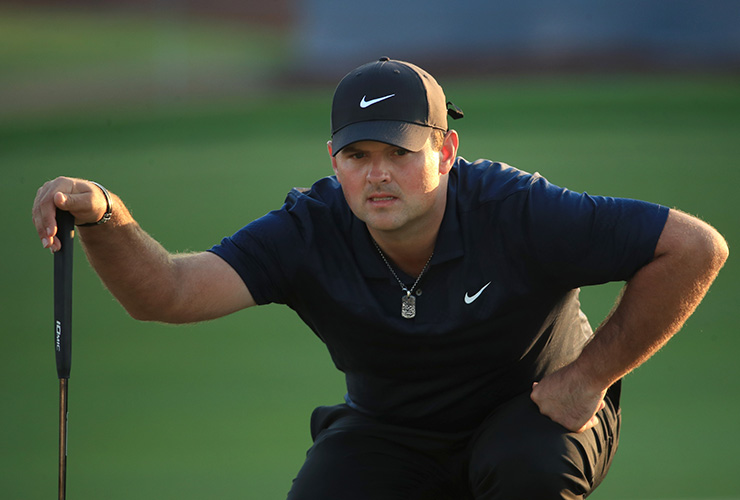 By Kent Gray
Patrick Reed has pole position but this will be no victory lap procession.

The 12th DP World Tour Championship, indeed the entire Race to Dubai season, has come down to one final 18-hole, multi-player sprint around Earth at Jumeirah Golf Estates and the permutations for both titles are boundless.

After a scrappy Saturday 71, Reed remains atop both the projected Race to Dubai (nee order of merit) and 54-hole DPWTC leaderboards. But he has company on the latter with Englishman Matthew Fitzpatrick (69) and Laurie Carter (68), joining him at -11, and very little wiggle room on the former.

There’s a peloton of proud and pedigreed Europeans pretty determined to ride roughshod over Reed’s dream of becoming the first America to win the season-long Race to Dubai. Just a shot adrift of the co-leaders is Lee Westwood chasing a third R2D title, Victor Hovland trying to win on the PGA and European Tours in consecutive weeks, Spaniard Adri Arnaus – like Canter aiming for a maiden European Tour win – and Scottish lefty Robert MacIntyre who has an outside chance to become European No.1 a year after winning rookie honours.

Even Tyrrell Hatton and Andy Sullivan, just four shots adrift in a share of 10th place, can’t be dismissed.

It remains, then, advantage Reed. But only just. To clinch the Harry Vardon trophy, Captain America knowns he’ll need to be sharper tee to green after his silky short game got him out of some tight, third round corners.

“It was sloppy,” Reed said of his Saturday circumnavigation of Earth which was in complete contrast to his best of the week Friday 64.

“Didn’t really hit the ball as well as I needed to. Made some putts, but didn’t make the putts also I needed to. It was one of those days I had to lean a lot on my short game, and the good thing is I was able to do that and put myself into position to still have a share of the lead going into tomorrow.”

It must be exciting/nerve-wracking to be so well-positioned to win both the final tournament and the entire season?

“Trying not to really think about that honestly,” Reed said.

“If it happens, it would be unbelievable. It was always a goal of mine obviously to win golf tournaments but to win this one and also to win The Race to Dubai and be the first American would be amazing.

“We’ve got a long day ahead of us tomorrow. We still have full 18 holes left and you can’t really sit back there and think as much about that as just stay in the present and try to play some good golf tomorrow.”

Pick your runner, grab the popcorn and enjoy the final rollercoaster ride. The Race to Dubai has achieved the marketeer’s dream, climaxing in one final sprint around Earth with the entire season on the line. It’s going to be a tense watch, but not half as stressful as it will be inside the ropes.