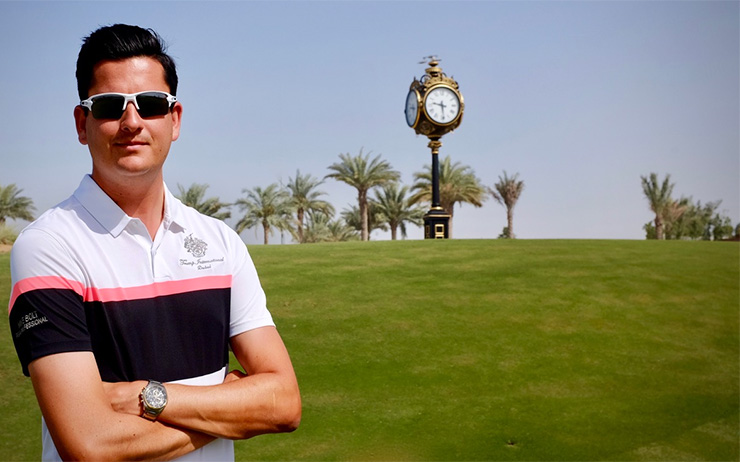 Mike Bolt feared he’d bombed his shot at a maiden UAE PGA Tour title when a cold putter and a run-in with the bunkers on Yas Links’ infamous closing stretch of holes conspired to turn a sub-par round into a frustrating 75.

But the Trump International Golf Club Dubai Senior Golf Instructor was shocked to find his signature on the three-over effort was good enough to earn a playoff at the Abu Dhabi PGA Open Monday.

The 28-year-old Englishman didn’t need a second invitation, a regulation par on Yas Links’ 1st hole edging Rory Young in overtime after the Al Ghazal pro (clearly not unfamiliar with sand) tangled with both a fairway and greenside trap en-route to a bogey five.

“’I’m delighted to get off the mark,” Bolt told Golf Digest Middle East of the win. “I came second last week with a three-under 69 at Arabian Ranches so the game is starting to come together after some work on the range over the last few months.

“The goal has been to make the Dubai Trophy team [an end-of-season, Ryder Cup-style event against a team of Emirates GC and Dubai Creek Golf & Yacht Club amateurs] and that looks likely now which is nice.”

Bolt, who hails from Bournemouth and joined Trump Dubai in December after a three-year stint at London’s Royal Wimbledon GC, wasn’t the only one to struggle with some tight pins at Yas Links despite the relatively benign conditions.

“My iron play was pretty solid but I couldn’t get my putter going…I had five straight birdie chances inside 10 feet [from 9-14] and only holed one of them,” he said.

“Then I dropped four shots in my last five holes including a double on 15 when I left it in a fairway bunker. I made what I’d call a ‘regulation bogey’ on 16, birdied 17 to get it back to two over but then three-putted 18 after I spun my approach off the green.

“I walked off the 18th green a little bit disappointed but when I spoke with [UAE PGA chief executive] Steven Munro and found out I’d made it into the playoff, it was a nice little surprise.”

Young, who had been in one of the first groups out and could never have imagined a 75 would get him into a playoff, was unlucky in sudden-death.

“Rory hit his drive into a fairway bunker and had about 80 yards into the green. He hit it straight over the flag into a back trap and got unlucky with a tough downhill lie. He did well to get it too about 20 feet but unfortunately didn’t make it. “

There are two further order-of-merit events – at Trump Dubai (April 18) and Al Ain (April 24) – before the 2016-17 season closes with the UAE PGA’s two flagship events: the UAE PGA Matchplay Championship finals at Trump on April 25 and the UAE PGA Championship at Al Zorah on May 1-2.

Defending champion Callum Nicoll (Abu Dhabi GC) will face Young (Al Ghazal) in the first of the matchplay semifinals while Munro is set to meet either David Gray (DG Golf) or Tom Henderson (Jumeirah Golf Estates) in the other.

The top 12 professionals on the final UAE OOM and four “captain’s picks” will then look to avenge their loss to the amateurs in the annual Dubai Golf Trophy on May 20-21.