A year ago at Bay Hill, little did anybody know they were seeing the last ‘normal’ golf tournament 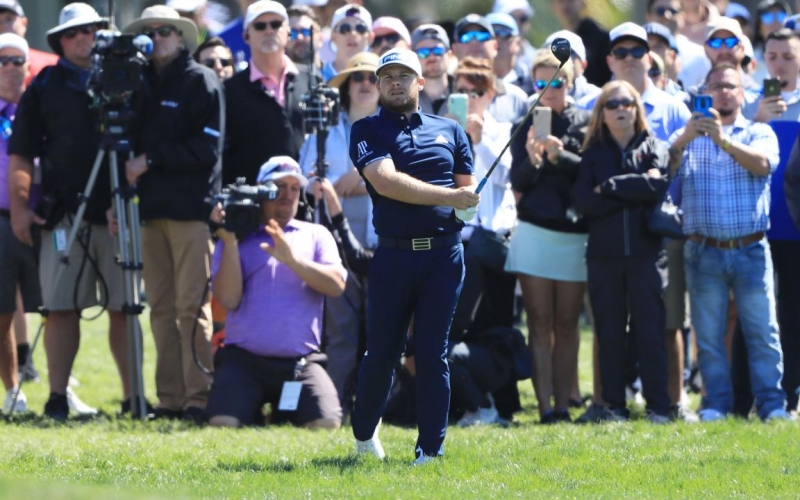 By Dave Shedloski
The last full measure of what we might consider “normalcy” on the PGA Tour occurred a year ago at the Arnold Palmer Invitational in Orlando, where England’s Tyrrell Hatton asserted himself as a world-class player just a few days before the world stopped turning.

The term “business as usual” truly applied to the events that unfolded last March at Bay Hill Club & Lodge. There were smatterings of talk about the spread of the COVID-19 virus, which hadn’t yet earned its insidious reputation as a pandemic. But it was moving in that direction. There was an undercurrent of uncertainty wafting throughout the property, but it was keeping a low profile. No one really knew what to think. No one knew what to believe.

When tournament week commenced exactly one year ago, on March 2, 2020, there were only 100 confirmed cases of the coronavirus in the United States and nine reported deaths from the virus—though the numbers were likely far greater but not detected because of a scarcity of adequate testing. Casualties worldwide were 3,300, predominantly in Asia. “We’re dealing with clearly an emerging infectious disease that has now reached outbreak proportions and likely pandemic proportions,” Dr. Anthony Fauci, director of the National Institute of Allergy and Infectious Diseases, said that day.

That same day, the PGA Tour issued a statement saying that officials were “closely monitoring all available information related to the continued spread of the Novel Coronavirus COVID-19” and that it was “establishing additional protocols to promote the health and safety of all participants and fans at our tournament.”

The following day, Augusta National Golf Club joined the chorus of concern, though club chairman Fred Ridley, in a memo to the media, asserted that there was not yet any change in status of the Masters Tournament or the accompanying preliminary events, the Augusta National Women’s Amateur and the Drive, Chip and Putt National Finals.

Golf already had taken a hit, however. Three LPGA events in Asia had been cancelled, as were the first four events of the PGA Tour’s developmental circuit in China. Also, two April European Tour events were being postponed.

But at Bay Hill, the band played on. The grounds were teeming with patrons. They bought food and beverages and perused apparel and souvenirs in the merchandise tent and thought nothing about the person who was serving it to them. They asked for autographs and players obliged. People shook hands. They talked freely in close quarters. They took pictures by the 13-foot bronze statue of Arnold Palmer that shadows the first tee. No one wore a mask. No one thought to do so. Or felt the need. 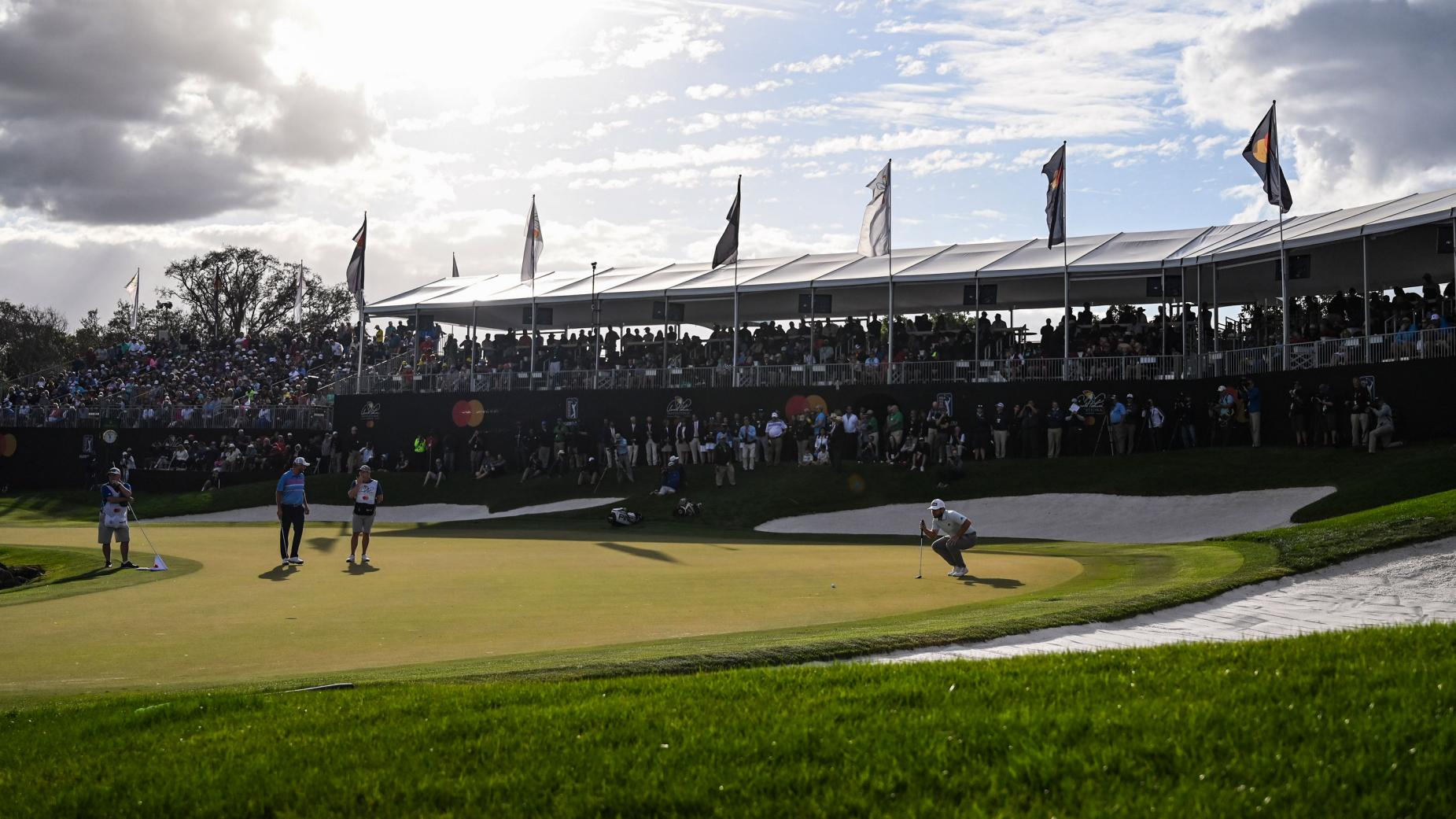 Keyur Khamar
An excited Sunday crowd on 18 at Bay Hill watches as Tyrrell Hatton gets set to win his first PGA Tour title.

As usual, the media quizzed players about the first major of the year. The Masters might not begin until the back nine on Sunday, but discussion of it begins in earnest when the tour moves into Florida. Phil Mickelson was quizzed about his possible interest in the proposed high-dollar Premier Golf League. Brooks Koepka was searching for his golf game, which had gone AWOL, scuttled by injuries.

Still, there was something on the wind.

The Olympic Golf competition, impacted in 2016 by the Zika virus that prompted a slew of top players to skip golf’s return to the Summer Games in Rio, was on more than a few players’ minds. (And, of course, the Tokyo Olympics eventually would be postponed until 2021.)

Rory McIlroy, ranked No. 1 in the world at the time and one of the players who skipped the Rio Games, said, “It’s something that we’re trying to stay on top of. If the organizers and the Olympic Committee believe it’s safe enough that athletes can go and compete in the Games, then you have to take their word for it.”

“It seems a bit overblown at the moment,” Adam Scott added, though he, too, was among the players who did not compete in 2016. “We don’t know which medical experts in the field to believe. It’s just, we’ll have to wait and see.”

Scott wasn’t trying to deny the dangers of the virus. But in early March, there wasn’t much known about the coronavirus, and some of the information being disseminated was conflicting.

Zach Johnson was one player who knew people who were starting to worry. He had given Bay Hill tickets to longtime family friends, but on the eve of the tournament they cancelled, citing fears of the virus. He understood. They are in their 60s and at a higher mortality risk. 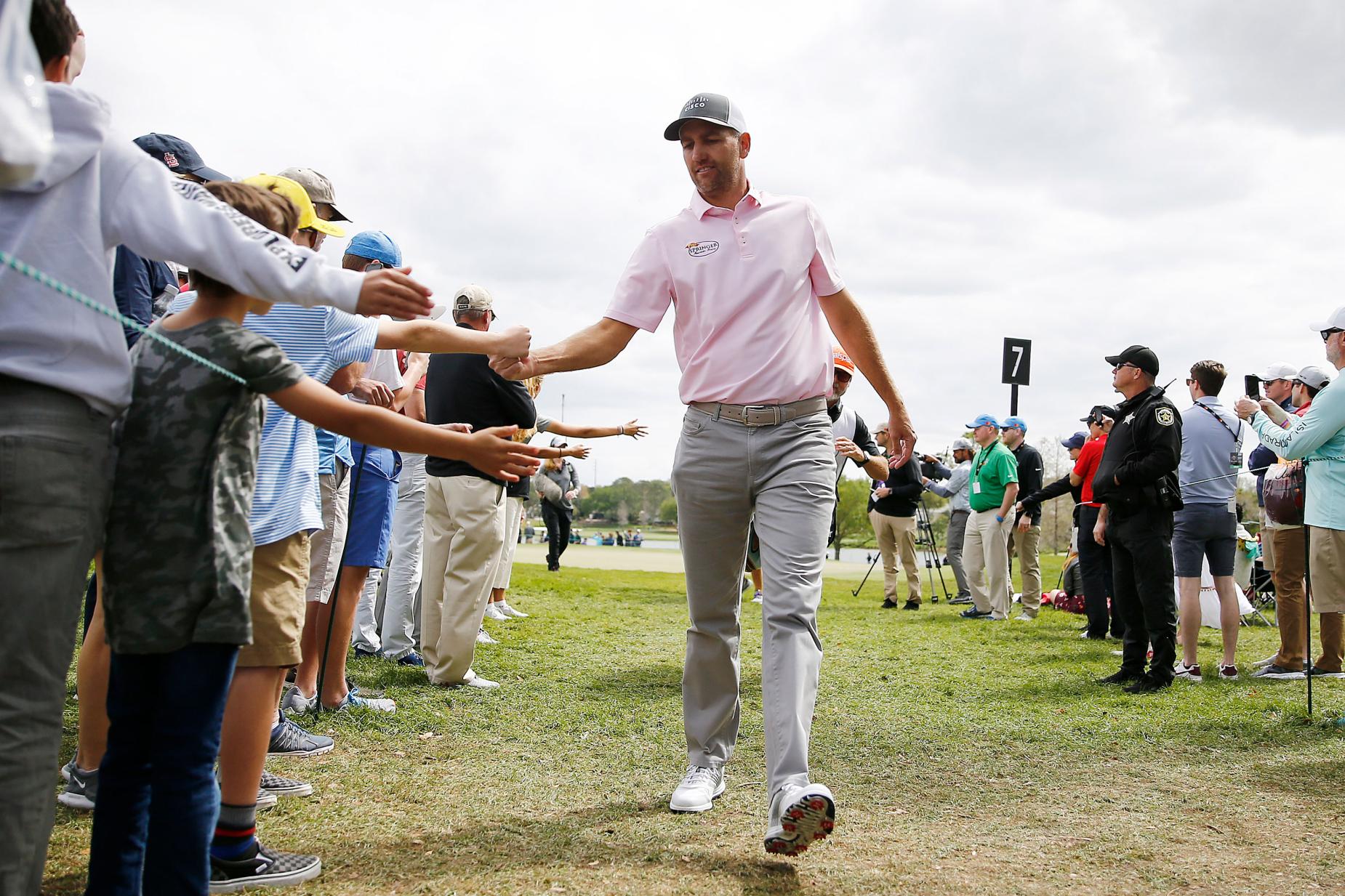 Michael Reaves/R&A
Days before COVID-19 would turn the U.S. upside down, Brendon Todd and other players were still giving fans autographs and high fives.

There were others on the grounds unsure of just how to feel. “Air” handshakes were offered by a few acquaintances, jokingly, nervously, as a way to acknowledge that, yes, there might be something to all this coronavirus talk. Call it the first gestures of social distancing.

Overall, though, there was very little of that, very little worry, very few hints of what was to come for golf, for America, for the world. The game was still the thing. The tournament and the competition went on without a hitch, and the atmosphere was by almost all accounts, strikingly normal—at least in the context of what we know now.

Again, there was something, subtly, on the wind. Oh, and also there was just wind. A lot of it. Dry, gusting, turf-toughening wind. It was present from the start of the tournament, but nature jacked up the fans to frappe on the weekend, and scores got scrambled. Hatton’s four-under 284 total was the highest winning score in tournament history, and he became the first player since Geoff Ogilvy in the 2006 U.S. Open to win despite failing to break par in each of the last two rounds. There was one round in the 60s over the weekend, by Matthew Fitzpatrick, who shot a final-round 69.

As is tradition, media members shared a toast of Ketel One vodka—Arnie’s preferred beverage—with the new champion. The Players, the PGA Tour’s lucrative flagship event, was days away. So was the world being turned upside down.