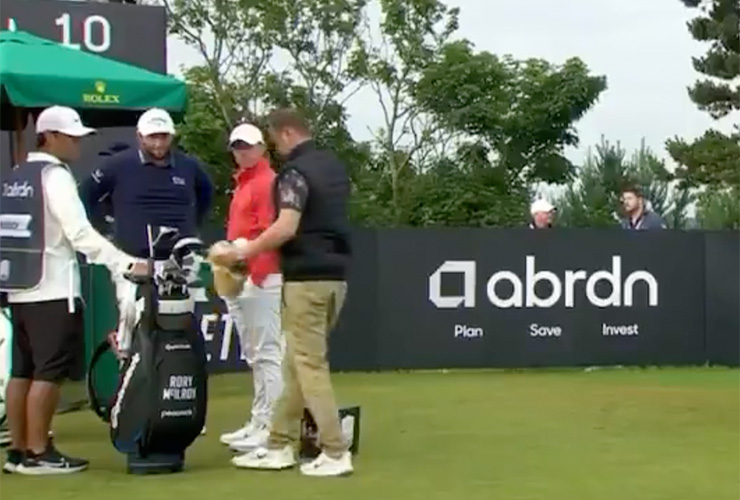 By John Huggan
NORTH BERWICK, Scotland — The second day of the 2021 Scottish Open at The Renaissance Club is destined to be one Rory McIlroy will long remember. Not because the four-time major champion played particularly well. And not because he will be harbouring hopes of adding to his list of 14 European Tour victories. After shooting 71 to sit one under par for 36 holes, McIlroy is more than likely to miss the cut.

Disappointing as that surely is, what will likely stick in McIlroy’s mind is what occurred as he stood on the 10th tee (his first of the day) alongside caddie Harry Diamond and playing partner Jon Rahm. As the trio chatted, a man appeared out of the gallery, grabbed the headcover off McIlroy’s driver and took one of his irons out of the bag. He then proceeded to make a couple of practice swings. All of which provoked a classic double-take from McIlroy and bemused looks from all concerned before a pair of security guards moved in to remove the intruder.

You touch Rory’s clubs like that you should be hit by a sniper instantly. Disappointing. https://t.co/BQwwkKy8En

The incident was recorded by at least a couple of spectators and soon went viral on Twitter. Local man, David Wilson, who posted a video of what happened, described the interloper as “some random.”

“He was quickly dealt with,” Wilson said. “The players laughed it off, saying they knew he wasn’t a golfer when they saw his grip.”

Another onlooker told The Scotsman newspaper: “He appeared on the tee, took the headcover off Rory’s driver in the bag then took out an iron and had a couple of swings with it. When someone told him that he couldn’t do that, he replied by saying ‘Why not?’ At that point, the security people assigned to following the group moved in and took him away.”

Perhaps not surprisingly, McIlroy had little to add at the end of a frustrating round marked by what has recently become the norm. Fairways were being missed, birdie chances were being spurned and short putts for par were sliding by.

“You all saw it on TV,” said McIlroy, as he packed his golf bag. “So you know what happened. I was surprised. But it was handled efficiently, and everything was OK. I had no idea who it was. Yes, there is a serious aspect to something like that. But it was handled well.”

Rahm, leading the tournament on 11 under par after adding a 65 to his opening 66, was more forthcoming.

“Let me put it this way: You could smell the reason why he did what he did,” said the World No. 1. “He was clearly not sober. I’m going to say it was vodka. I’m no expert, but he had a long night for sure. He probably thought it was a fun idea. And, to be fair, it was quite funny. At one point I thought he was going to Happy Gilmore the headcover. I don’t think it put Rory off. He hit maybe his best drive of the tournament off that tee. He started playing beautifully. If anything it put a smile on our faces. It’s a pretty good story to tell in the future.”

Still, as McIlroy alluded to, there could have been a more sinister aspect to such an egregious breach of security. But Rahm was quick to quell such a notion.

“Security was good,” he said. “But these things can happen. The guy had good timing. He walked in very confidently. We were all thinking, ‘Maybe he is supposed to be doing this.’ We didn’t know. We thought he was from television or a magazine and was going to take a picture. Then we realized that was not the case when he started to tee-off with the head-cover. But, for the most part, Rory and I both thought it was a prank or someone who was supposed to be there. We didn’t say anything. He was carrying a 6-iron. I didn’t want to get hurt.”

In response to what went on, the European Tour issued a short statement:

“At approximately 8 a.m. on Friday morning, a spectator entered the 10th tee area,” said a spokesperson. “He was quickly escorted from the tee by security personnel and the matter is now in the hands of Police Scotland.”

And in turn, “officers were alerted to a man causing a disturbance within the grounds of the Renaissance Club in East Lothian, around 8am on Friday July 9,” said Police Scotland. “The 35-year-old man has been taken to the Royal Infirmary in Edinburgh and enquiries are ongoing.”